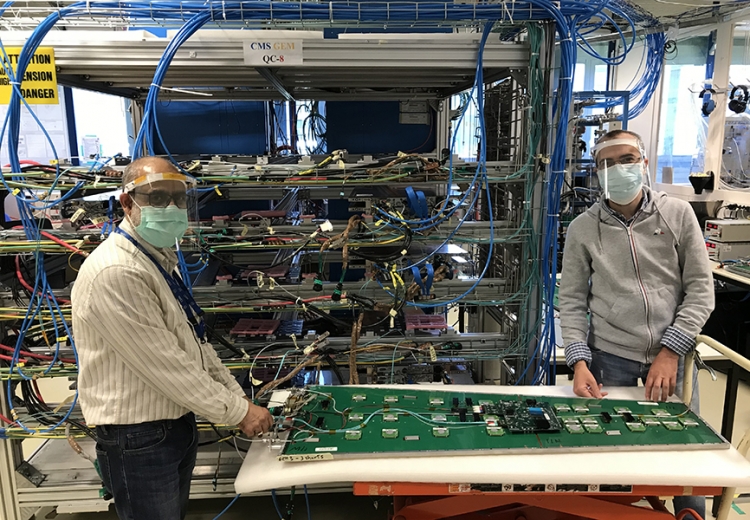 Mohsin Abbas and Francesco Fallavollita in front of the QC8 stand, preparing a GEM chamber for testing. 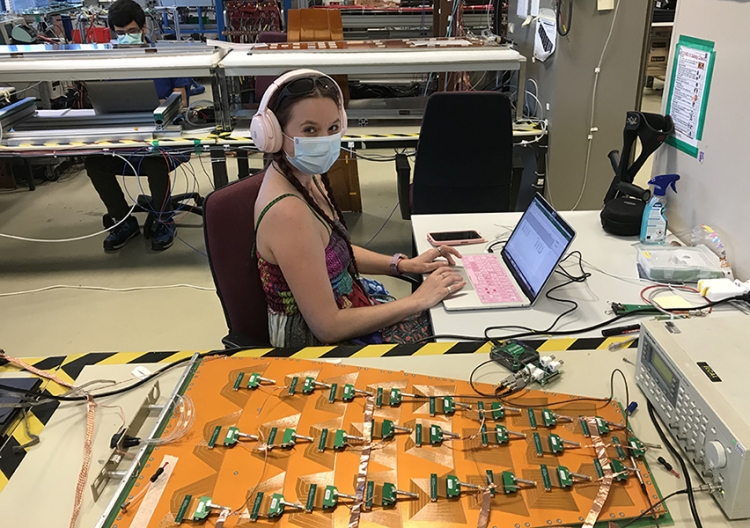 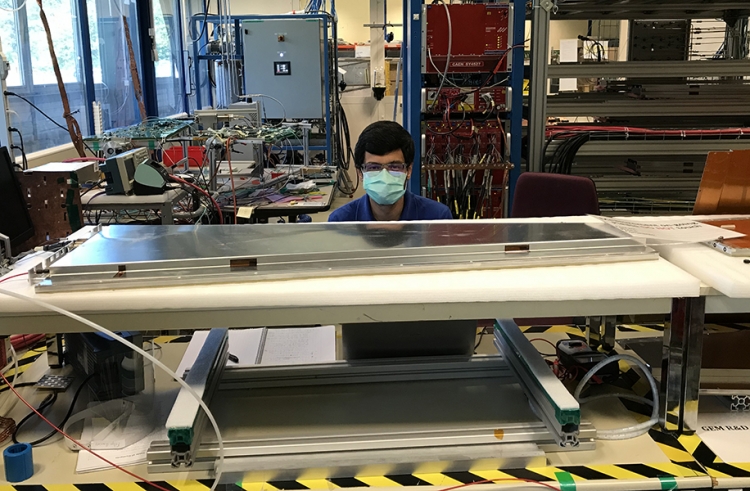 Since late May, with the incremental re-opening of CERN’s facilities, members of the CMS GEM project have been hard at work restarting the laboratory activities in preparation for the continued efforts towards the GE1/1 chambers installation. Made up of 144 gas electron multiplier (GEM) detectors in the CMS muon endcaps, GE1/1 marks a completely new detector technology that will be added to CMS, helping to pave the wave for a new era in CMS data taking. With long shutdown two (LS2) nearing its end, every day counts in preparing the GE1/1 chambers for installation into the positive CMS muon endcap. Each chamber must pass through a rigorous series of quality control (QC) steps before it is deemed acceptable for installation into the CMS detector. With the first five QC steps already finished, the team must put all of their efforts into the remaining three steps.

The first of these final three steps, QC6, is a high voltage stability test. Here, the GEM foils are evaluated for their stability under high voltage, and cleaned of any impurities that could cause electrical discharges in the future operation of the chamber. This step is done in part using programs written in LabVIEW. LabVIEW is a key tool in the lab that is also being utilized to develop an application that would allow for the better detection and analysis of discharges during quality control testing. This improved capability is crucial to ensuring a long and healthy operational life for the GE1/1 detectors within the CMS muon endcap. 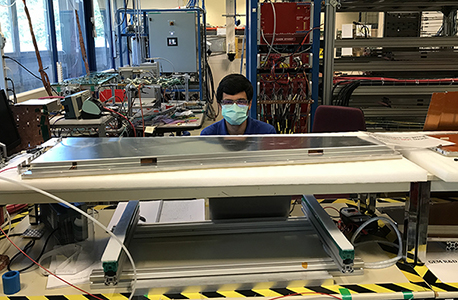 Once a chamber passes QC6, it moves on to QC7. In this step, the front-end electronics are first installed onto the GEM chamber, and tested to ensure proper communication between each of the components. This is accomplished through a series of scans, which are carefully analyzed by an expert researcher. The information from these scans allows them to make crucial decisions such as choosing the best phase for the front-end readout chips (called VFATs) or choosing a threshold which best allows for muon detection, and to ensure all of the electronic components are behaving correctly in regards to communication, responsiveness, efficiency, and noise. 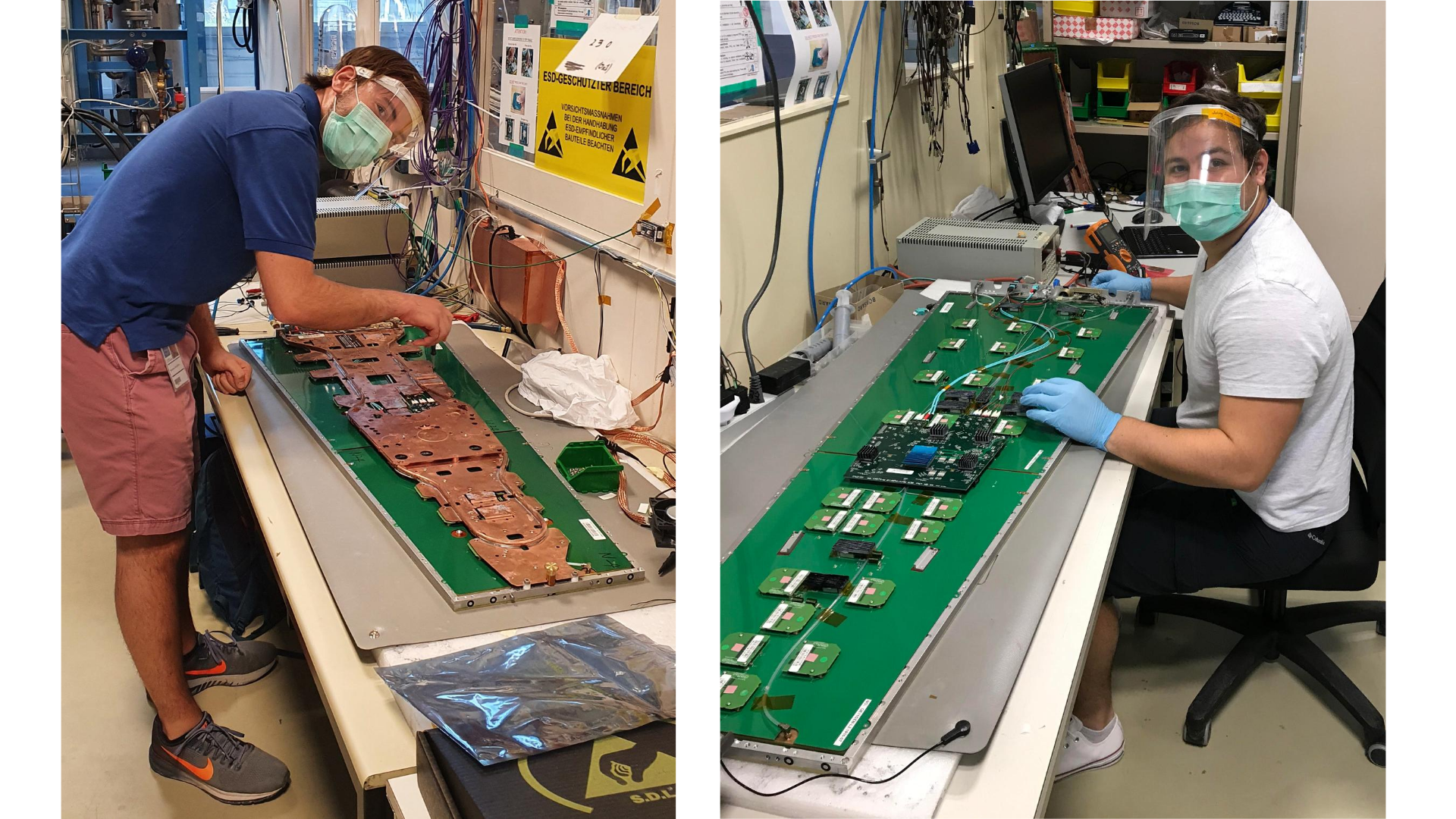 A central feature of the GEM production lab is the QC8 stand, the location of the final quality control step the chambers must undergo. This five-row, three-column detector stand has everything that’s needed to simulate the working conditions of the CMS GE1/1 chambers. With all of the same data, voltage, and cooling connections as in CMS, the QC8 stand allows the researchers to take cosmic muon data with up to 30 GEM chambers at a time. QC8  consists of a series of tests which all must be passed in order for a GEM chamber to be validated. First, they undergo a process known as “HV training”, in which each of the GEM foils in each chamber is ramped up to a high operating voltage and must remain stable for a period of several hours. It is during this step that shorts may be discovered, requiring the dismounting and cleaning of the chamber. If the detectors remain stable under HV training, a series of scans is taken to quantify the noise and behavior of the detectors. And finally, if all of the scan results are satisfactory, the efficiency of each chamber is tested through the taking of cosmic muon data. Only detectors with a 95% efficiency or greater are deemed good enough to be installed into CMS. Any chamber which doesn’t meet this stringent requirement is dismounted from the stand for debugging and brought into the nearby clean room for repair if necessary.

Left: Elizabeth Starling taking scans to assess the noise in a GEM chamber. Right: Mohsin Abbas and Francesco Fallavollita in front of the QC8 stand, preparing a GEM chamber for testing.

Getting all of the GEM chambers through this complex process requires the full dedication of a team working together like clockwork. With a tight schedule to keep to and no time to lose, each step must lead into the next smoothly and efficiently.