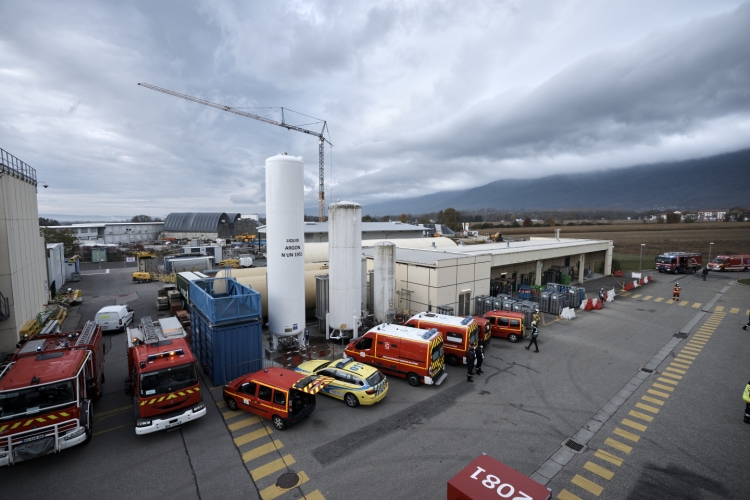 CERN’s most ambitious emergency response exercise to date took place on 13 November at LHC Point 5, with the involvement of French, Swiss and CERNois safety and rescue teams

It is a peaceful Saturday morning in Cessy, France. Thick autumn clouds conceal the slopes of the Jura and, close to the sleepy village, the CMS experiment at the LHC gets ready for the coming accelerator run. But deep within the vast experiment complex, an incident interrupts the quiet: a careless technician, bypassing every safety system, mishandles gas, which catches fire. From this point on, all hell breaks loose. The gas spreading to the underground cavern explodes, injuring workers and visitors and causing scaffolding to collapse on one of the underground evacuation paths. Fried by the subsequent power surge, a crane engine crashes, immobilising the machine and its operator, stuck dozens of metres above ground. The nearby High-Luminosity LHC (HL-LHC) worksite and caverns are not spared: kindled by the power surge, fire engulfs a break room and, further down the site, a mechanic gets trapped under heavy metal beams. Oh, and an electrician gets shocked and injured while trying to solve a technical problem in a surface building, too.

“To play an exercise of this scale, we needed to come up with likely scenarios after a very, very unlikely trigger. We are already well prepared for the bad, but what of the worst of the worst?”, explains Roberto Perruzza, LEXGLIMOS (group leader in matters of safety) at CMS who, along with Marc Nas, deputy group leader of the CERN Fire and Rescue Service, designed and controlled this large-scale, realistic emergency response exercise.

The complexity of the exercise’s scenario, outlined above, was mirrored by the number and variety of teams involved. Supported by 90 CERN volunteers, who helped with coordination and safety and played the role of technicians, visitors and casualties, the main stars of the morning were seven safety and rescue teams hailing from one international organisation (the CERN Fire and Rescue Service) and two countries (the French and Swiss fire brigades and civil protection forces, plus the Brigade Sanitaire Cantonale and the Swiss Samaritains rescue association, with their Piquet Catastrophe group). The exercise was designed following the success of a similar exercise at the Globe in 2019, to enhance interoperability and communication between the teams and to improve knowledge and understanding of their respective working methods when implementing a multinational response to a major incident in a complex infrastructure at CERN.

For almost four hours, the 260 participants wreaked a perfectly orchestrated and executed havoc at Point 5, on the surface and in the CMS and HL-LHC caverns. The rescue teams had to deal with a very fake fire made of posters depicting flames, very real scaffolding set up in the CMS service cavern to impede the response, and casualties screaming in skilfully feigned pain. This allowed them to test the efficiency of the doctrine équipes mixtes, a common multinational response plan that anticipates interventions of a country’s rescue teams on the other country’s territory, as well as handover of command between teams in times of need – all of this under the framework of the tripartite agreement binding CERN, France and Switzerland for matters of emergency response.

“We will identify and work on the lessons to be learned from the exercise in the coming weeks. But the main takeaway was clear from the minute we were done: we need to do it again, and more frequently, on a smaller scale! The relationships we build during these exercises will be crucial in the event of a real emergency response, as is the knowledge of the other teams’ methods we gain in the process,” says Marc Nas. “Besides, it is a pleasure to work alongside people who are determined to power through a complex project and eager to make a success out of it. All the participants were very satisfied with the outcome and we look forward to repeating the exercise in the future.” 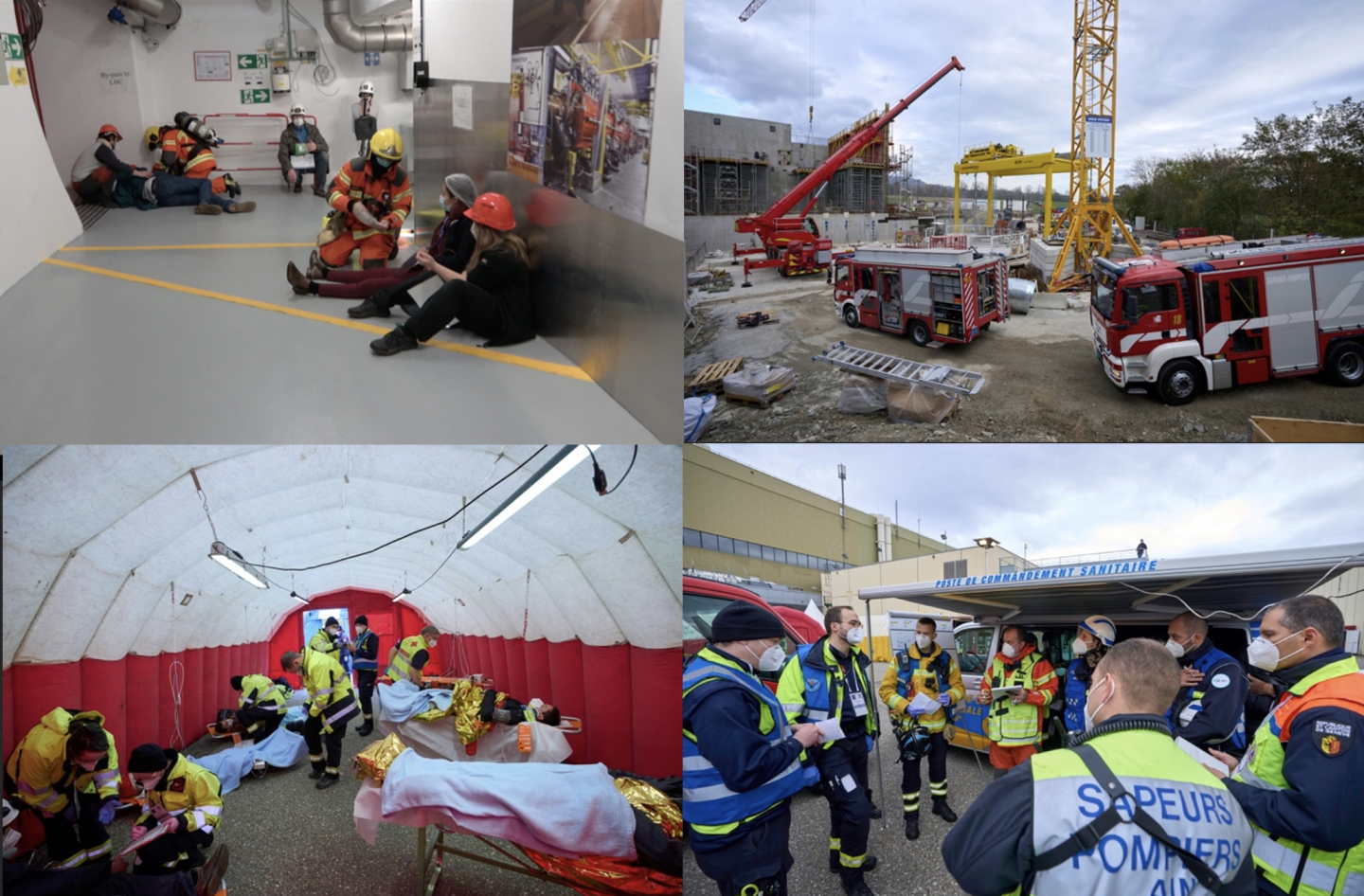 Clockwise from top left:
- Volunteering "casualties" are rescued in the CMS cavern
- Swiss firefighters intervene at HL-LHC point 5 to save a crane operator
- Commanders of the various response teams discuss their course of action
- Swiss Samaritains tend to volunteering "casualties" in a tent outside CMS;
all as part of the emergency response exercise. (Image: CERN)