Cosmic Rays, splashes and test collisions: CMS has seen them all! 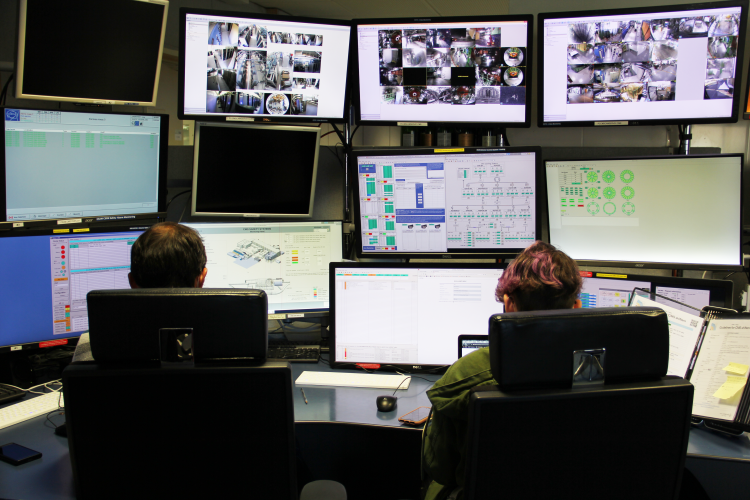 CMS members working in the control room during the pilot beams

As the end of Long Shutdown 2 (LS2) is getting closer, CERN along with the experiments at the Large Hadron Collider (LHC) is preparing to welcome the most awaited Run 3 next year. The CMS experiment geared up for the two weeks of CERN pilot beams in fully operational mode.

During the last fortnight of October 2021, pilot beams were injected at the energy of 450 GeV into the LHC to test the functionality of the upgrades made during the past years of shutdown. These were low energy beams as compared to the actual energy which LHC will reach for Run 3 next year. All the LHC experiments fastened their seat belts to record exciting events and CMS was ready with its solenoid magnet turned on to 3.8 Tesla.

The first pilot beam circulated on 19th October 2021 and the very same day the CMS detector recorded splash events. To make a splash event happen, the path of beams is obstructed with a one-meter-thick collimator that basically acts as a wall against which the beam “splashes”. These splashes result in a shower of muons that is then flushed on CMS horizontally, and measured by the calorimeters of CMS.

On the left members of CMS crew waiting and enjoying splashes, on the right a splash event recorded by CMS

The data recorded allows physicists to check the functionality and synchronization of the electronic channels in the different parts of the calorimeters after 3 years of LS2.

Following the first week, LHC moved to the second and last week of tests aiming for test beam collisions. To have the test collisions, low energy beams circulating in clockwise and anticlockwise directions were made to collide at the center of the four big experiments.

The CMS detector recorded test collision data that are going to be used to commission all  sub-detectors, including the newly installed ones during the LS2 (GEM and pixel tracker detectors), and to tune at best the detector setting for data-taking in Run 3. These data at relatively low energy and beam intensity were sufficient to observe the rare production of well-known particles composed of heavy quarks, such as the J/psi as shown on the Figure, with a CMS detector fully-ready for Run-3.

Furthermore, in the free time when the beams were not circulating in the LHC, CMS kept  all its components on to detect cosmic muons - Cosmic Rays At almost Four Tesla (CRAFT). A previous cosmic ray campaign had taken place for five weeks last summer, but in this occasion the CMS detector had its magnet on. The cosmic ray data recorded with the nominal 3.8 T magnetic field are crucial to commission and align the tracking system for Run-3. Overall, the data collected from the cosmic rays campaigns is the key ingredient to align the tracking system with the needed precision for Run3. 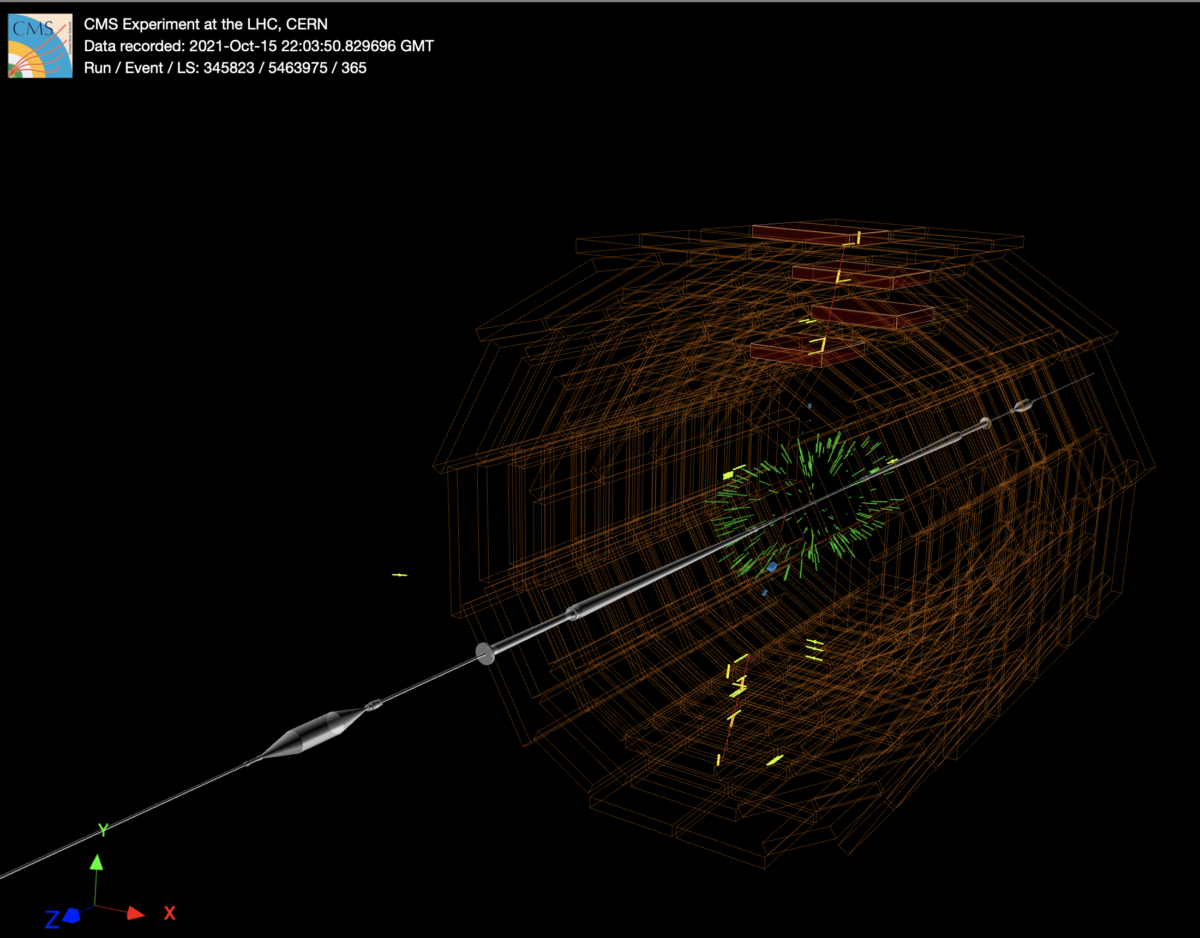 These two weeks of pilot beams were full of excitement for the researchers who have been on shift day and night at the CMS control room monitoring the status of the detector and waiting for the events which were the tests for the hard work done during the long shutdown 2 for upgrade.

After successfully completing this major milestone of recording proton-proton collisions with test beams in stable conditions, CMS researchers are looking forward to the start of the Run 3. Like a last check for a renovated and refurbished car before a new race: CMS is ready on the starting line! 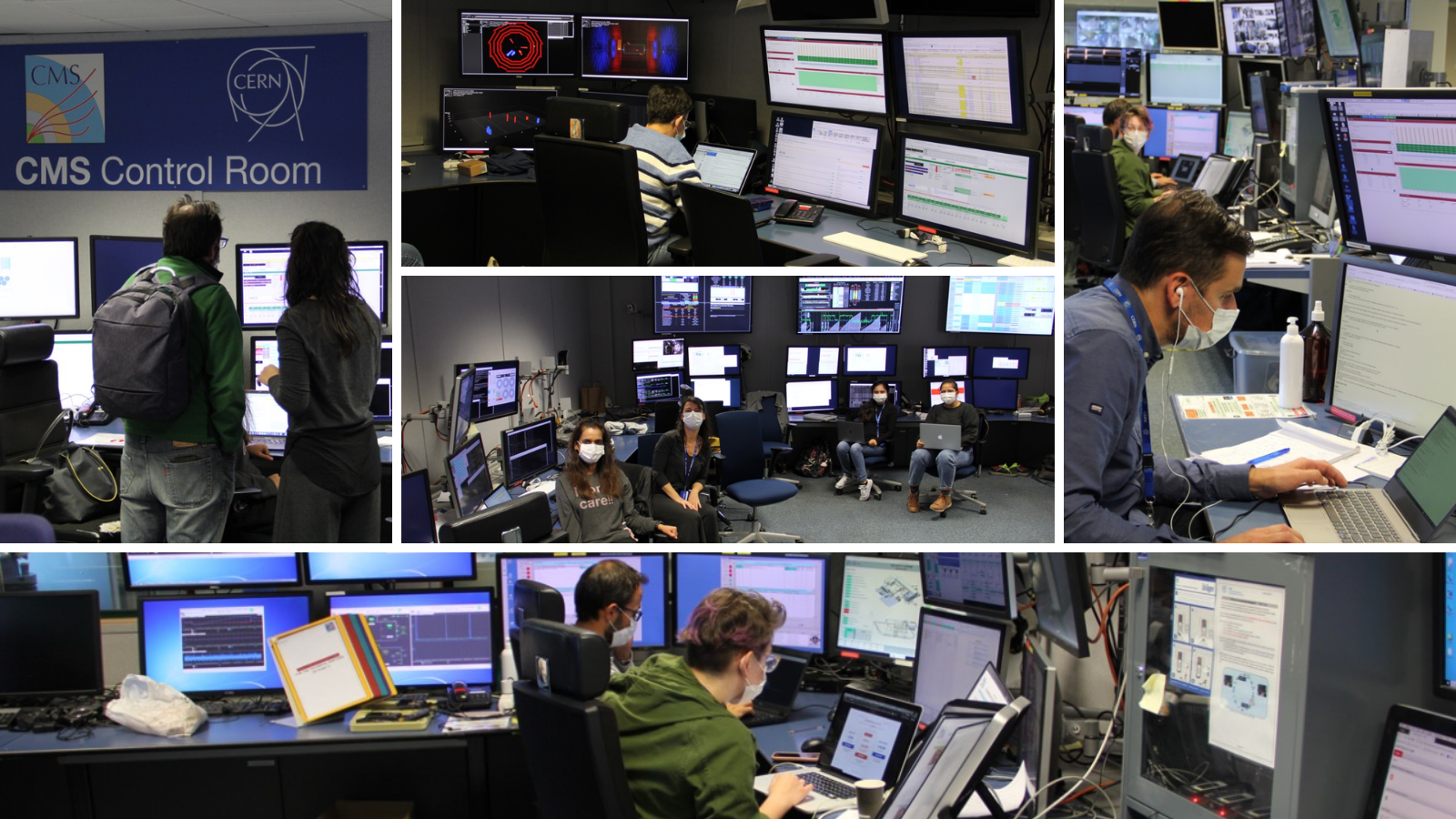 CMS members working in the control room during the pilot beams