How are the quarks moving? 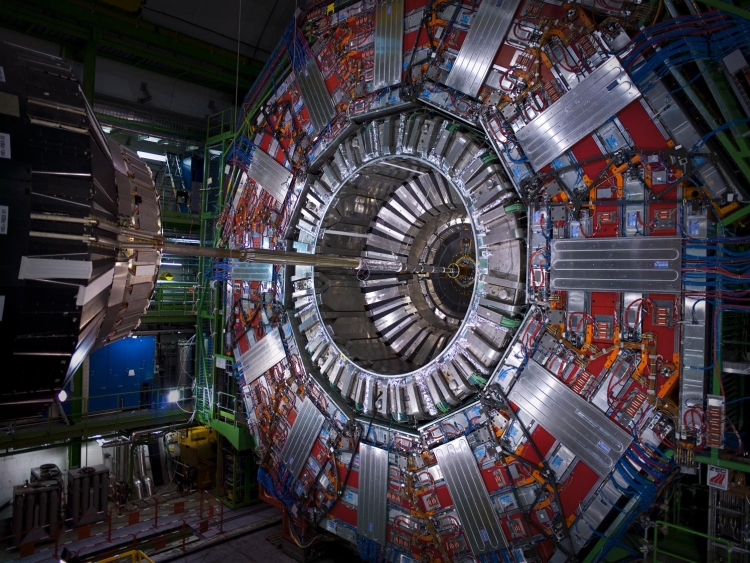 The Large Hadron Collider, LHC, collides protons at an energy of 13 TeV — thirteen thousand times the mass of a proton. The high energy of the accelerator allows searching for (and maybe finding) new particles, but also in-depth studies of the protons themselves.

It is often said that the protons are made of three quarks: two "up" and one "down". Actually, this picture isn't fully correct and the three "valence" quarks account for only about 1% of the proton mass. Protons look more like clouds of gluons, quarks and antiquarks — fundamental particles that we refer to as "partons". There are two up quarks more than there are up antiquarks, and one more down quark than antiquarks. This is an ever-changing cloud: quark-antiquark pairs are continuously being created and annihilated, and gluons are emitted and absorbed. In this dynamical picture of the proton, the partons are moving; however, they are bound by the strong interaction and cannot escape from the cloud.

When the LHC accelerates a proton, the energy provided by the accelerator is split between the partons in such a way that all the partons move simultaneously. Inside, each parton still follows its own path according to the small movements in the cloud. The motion imposed by the LHC comes on top. It is much larger than the moves inside the cloud, but its direction is defined by the accelerator — which is very well known.

To observe the motion of the partons, the CMS experiment uses one of its favourite particles, the Z boson. At the LHC, the Z bosons are created via the weak interaction, in the annihilation of a quark and an antiquark coming from the two colliding proton clouds. The direction of the created Z boson is determined by the directions of the colliding quarks at the time of interaction. By studying the Z bosons, CMS can thus gather information about the motion of quarks within the protons. This is what has been achieved in a new data analysis, where CMS studied Z bosons decaying into electron-positron and muon-antimuon pairs.

Figure 1: Z bosons are created in the annihilation of a quark and an antiquark. Here, a d and an anti-d quark turn into a Z boson. The direction taken by the Z boson depends on the speed of the quark and antiquark just before the collision.

There are several reasons for choosing Z decays to pairs of electrons or muons. First and foremost, they are particles that the CMS detector was designed to measure very precisely. Another reason is that only a small number of other processes, apart from Z bosons, produce such pairs of particles, which reduces the uncertainty related to rejecting events that are not the Z bosons. Lastly, electrons and muons are mostly unaffected by the remnants of the collided protons. This means that we can directly map them to the Z boson, and eventually to the quarks, which is an advantage for the theoretical interpretation of the results. Thanks to all these factors, the results of the experimental analysis have a high precision and are easier to interpret.

The results of the measurements are shown in the figure below, which shows how likely it is to produce a Z boson depending on how fast it moves away from the proton beams. The left side of the plot corresponds to Z bosons moving very slowly, which can be traced back to the quarks in the colliding protons being almost motionless. CMS sees very few Z bosons in this situation; most of them have a significant speed, as is reflected by the peak of the curve. Towards the right hand side of the plot, one can see that some –very few– Z bosons are moving away from the beams at extremely high speeds.

Figure 2: Experimental results that CMS used to probe the motion of quarks inside protons.

The new measurement by CMS also sheds light on an aspect that was until now never studied in detail: the apparent speed of the quarks depends on the duration of the observation. One can think of quarks as children running in a playground: they can sprint for a short time, but soon reach the side of the area and need to slow down to turn back. The same is true for the quarks in the proton: when observed for a short while, they can be seen moving very fast, while if you look at them longer they look slower most of the time.

To obtain measurements covering various durations, CMS used "virtual" Z bosons, which appear with a mass smaller or larger than that of a real Z boson: the heavier Z bosons correspond to shorter durations, and vice-versa. The animation above shows the results for the five durations considered by CMS, ranging from 6×10-26 to 1×10-26 s — the shortest duration ever for such a measurement, five times better than what was previously available! The curves may not seem very different at first, but when looking closely at the first two points one can see them moving down for shorter durations. Conversely, the points on the right of the curve move up, as is especially well visible near the middle of the plot. This shows that quarks reach large speeds more easily over very short periods of time, just like children in the playground.

The data obtained in this measurement will now be used by theorists to improve our understanding of how quarks move inside protons. The accurate knowledge of the involved dynamics will enable more precise measurements and searches for new phenomena at the LHC. It will also be essential for future colliders at higher energies, where these effects are expected to become more dominant.