Measuring the Higgs boson decay to WW is 90% physics. The other half is teamwork! 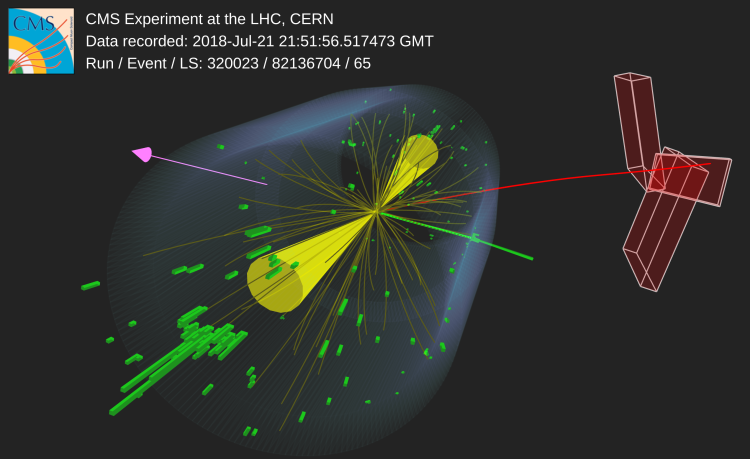 It was a bit more than 10 years ago that together with our colleagues from the ATLAS experiment, we at CMS announced the discovery of this new (and quite amazing) particle. Now, detecting a new fundamental particle is no easy feat; in these 10 years, however, the experiments were able to go from seeing the Higgs boson for the first time, to studying its properties to a remarkable level of precision. The CMS experiment recently published a new entry in this growing set of precision measurements, studying how the Higgs boson interacts with other particles in the standard model (our current best understanding of how the universe works on a microscopic level). The Higgs boson is very unstable, thus once it’s been produced it decays (incredibly quickly) to other particles. It can only be detected indirectly by looking at these secondary particles, which leave their unique signature in the detector. The results we are presenting here have been obtained by analyzing events in which a Higgs boson decays to two W bosons, carriers of the weak nuclear force.

Given the special occasion of the 10th birthday of the Higgs boson, we thought it would be nice to give you a little peek behind the curtain, focusing more on what it takes to obtain a result like this, rather than on the (still very much fascinating) technicalities of the analysis. After all, physics is made by people and it’s good to remember that.

As said, we can only ever spot a Higgs boson through the particles it decays into. These can be photons, Z bosons, W bosons, tau leptons, muons, bottom quarks, and more. Each of these decays comes with its own unique set of strengths and challenges, but all are crucial in understanding how the newest particle we know of behaves. When a Higgs boson decays into two Ws, that’s not the end of the story: W bosons are themselves unstable, decaying to quarks or leptons (electrons, muons, taus), as you can see in Fig. 1. The challenge comes from the fact that when a W decays to a charged lepton, it also produces a neutrino. Neutrinos (𝜈) are unique in Nature: they are the only known particles that interact exclusively through the weak and gravitational forces. In practical terms, for us experimentalists this means that neutrinos are basically impossible to detect consistently, as they fly right through the detector without leaving any trace. You can imagine how this poses a challenge: when both W bosons decay to charged leptons (which we like, as we are very good at measuring those), each also produces a neutrino; from the 4 particles that make up the final state (l1, l2, 𝜈1, and 𝜈2), half are invisible. Well, not quite invisible, but we’ll get to that a bit later. The Ws can also decay to quarks, but charged leptons are identified much more effectively. So why bother? First, as it turns out, the Higgs boson decays to Ws quite often! The abundance of WW decays then compensates for the complicated final state. 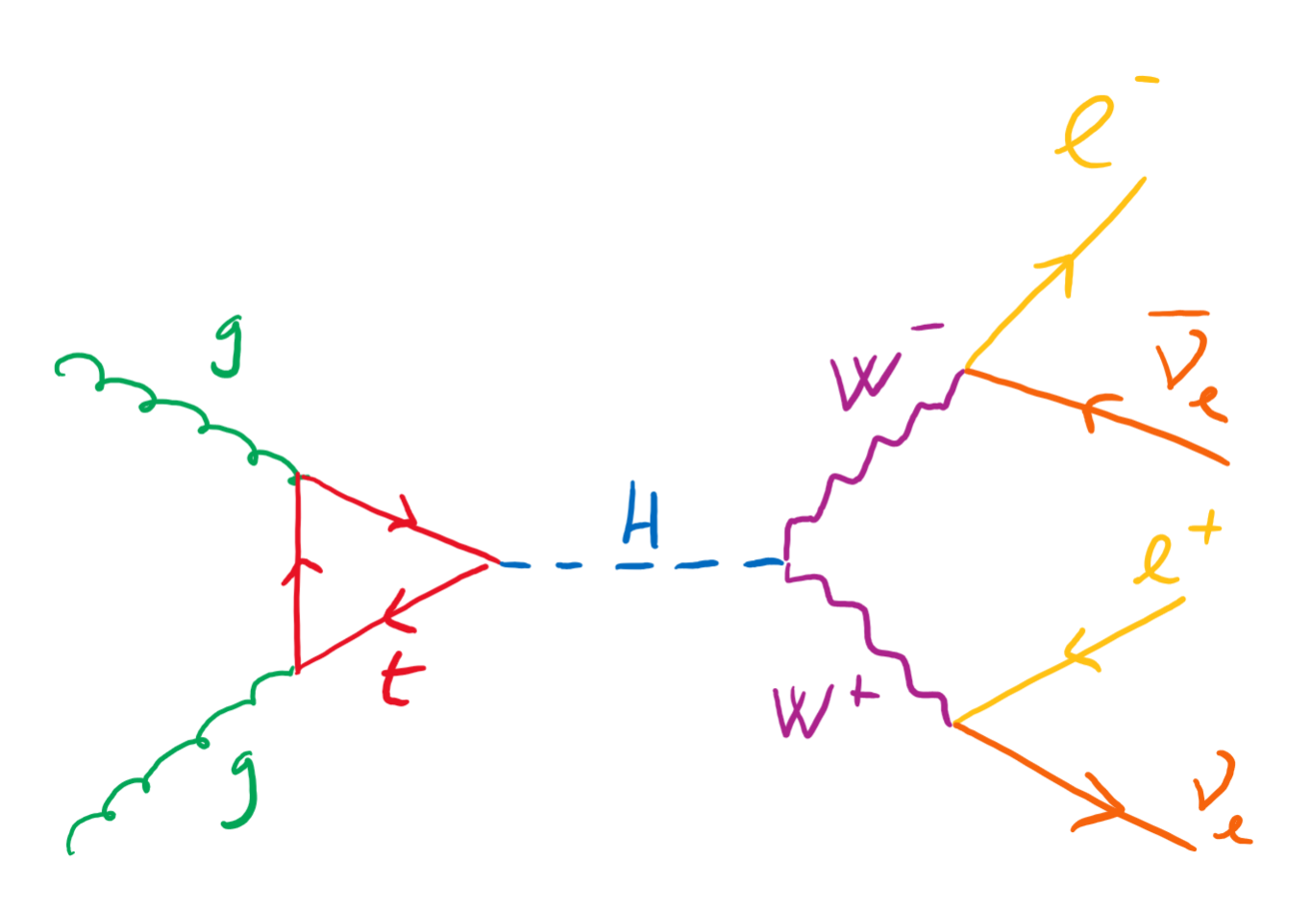 There is also a second, more subtle but also more fascinating (and important), reason for studying the H→WW decay: it gives access to what we call the coupling of the Higgs boson to W bosons. This quantity regulates how strongly the Higgs boson interacts with Ws. What makes this number important is the very nature of how this interaction is born: the spontaneous breaking of electroweak symmetry. In a nutshell, the mass of all elementary particles comes from their interaction with the Higgs field, whose manifestation we call a Higgs boson (quite a special particle indeed). Probing how strongly W bosons interact with the Higgs boson means probing the electroweak symmetry breaking itself, something that occurred an infinitesimally small instant after the birth of our universe.

The H→WW measurement involves most of what the CMS detector can see and measure. Ws can decay to electrons, muons, taus (who themselves decay to other particles), as well as quarks. Depending on how the Higgs boson is produced, there can also be leftover quarks from the colliding protons, manifesting (as all high-energy quarks and gluons do) as so-called hadronic jets, i.e., collimated sprays of particles, in the detector. Finally, those pesky neutrinos; while it’s true that they don’t leave any direct trace in the detector, we can still have a hint of their presence with a trick of sorts: we know that before colliding, the protons in the beams only move in the direction of the beam itself, i.e, they have no transverse velocity and thus no transverse momentum. Enter the conservation of linear momentum, stating that whatever complicated interactions occur during the collision, the sum of transverse momenta of all outgoing particles must equal the total transverse momentum before the collision occurs, which we know to be zero. This of course includes any momentum carried by neutrinos: their escape from detection then leaves an indirect trace in the form of an imbalance in the transverse momentum we can see, which does not add up to zero.

All of this means that accurately measuring the Higgs boson’s properties in the WW channel is an effort involving electrons, muons, taus, missing transverse momentum and hadronic jets, all at once! It’s one of those measurements that puts the full CMS detector to work. This also means that a lot of work from many people from all around the world is required in understanding each aspect that enters the analysis, working together to achieve a common objective. The goal is set, but the journey will be a challenging one indeed!

An analysis like this one can take years in the making. The reason is that to give a correct and robust result, all possible pitfalls have to be considered and avoided, and one can never be sure of how many will be found. The data used for this result were collected in 2016, 2017 and 2018 (the so-called Run 2 of the LHC). Calibrating data collected over three years, with ever changing detector conditions, to the required level of precision, was a monumental task. The efforts that then culminated in the results we are presenting today were in full swing as far back as 2018. First we focused on events in which a Higgs boson is produced together with a W or Z boson (one of the ways a Higgs boson can emerge at the LHC). Effort on the rest of the analysis kicked into full gear in 2019, focusing on Higgs bosons produced from two gluons (gluon fusion) and from quark-radiated vector bosons (vector boson fusion, VBF for short), for which you can see and play with a candidate event in Fig. 2. That’s a grand total of over 200 different analysis categories (i.e., ways of slicing and dicing our data) to take care of. But even when all of them had been tamed, the adventure was far from over.

It’s not enough for the authors of the analysis to declare that everything works; they need to convince the rest of the collaboration that everything they have done, all the calibrations, all the statistical procedures that they have employed, are sound. This process can be excruciating (for both the reviewers and the reviewed). A team of five CMS members was tasked to carefully act as internal reviewers, meaning that they had to go through the documentation supporting the analysis. Easy-peasy? Not really, as the supporting documentation is not just the 50 or so pages that we finally submitted to the journal: in this case it was a monumental stack of over 1.08x103  pages (yes, scientific notation is in order when you talk about 1080 pages!) of internal documentation with hundreds of plots and dozens of tables. After the internal reviewers were satisfied, the whole collaboration had a chance to read the documentation and comment on the analysis. All CMS results go through this internal review process, which in this case was exceptionally difficult due to the sheer size of the analysis.

Finally, after 3 long years, results were ready to show to the world. The journey had been long, but worth it in the end, as these are amongst the most precise results on Higgs physics in a single decay channel currently around! Below you can see signal strengths (ratios between the cross sections we measure and the ones we expect) for the 4 most probable ways of producing a Higgs boson, as well as a measurement of how strongly the Higgs boson couples to vector bosons and fermions (we call these coupling strengths 𝜅V and 𝜅f).

Figure 3: Left: ratios of the observed cross sections to the expected ones for different Higgs boson production mechanisms. Right: coupling strengths of the Higgs boson to fermions (leptons and quarks) and vector bosons (here, Ws and Zs).

We really hope this short trip through the fascinating process of producing results like these ones can make you appreciate them a bit more (and we didn’t even go into the years it takes to design, build and understand the detector). These 10 years, going from seeing the Higgs boson for the first time to measuring its properties to this level of precision, have been a real adventure, and one we can’t wait to continue on, as we feel we just started scratching the surface of what this special particle has to tell us.