milliQan is getting ready to have a look at the dark

By Christopher Hill and Federica Baldassari 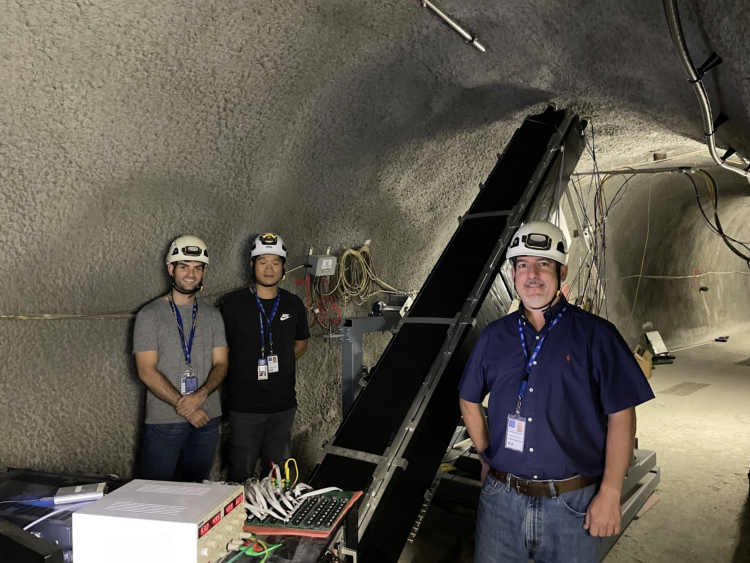 This October, the first component of the milliQan detector has been installed on top of the CMS experimental cavern, and it is now taking data at the high energy of LHC RUN3.
The milliQan detector project was proposed as a new LHC experiment in 2016 aiming to look for the so-called milli-charged particles, theoretical subatomic particles that are not part of the Standard Model.

These particles are not easy to detect because of their low electric charge, between 10−1 −10−3 e (being e the charge of the electron).
Due to their nature, they would fly across the current detectors, like CMS, leaving no trace of their path.
Why focus on milli-charged particles? There is not just one reason, but one of the most intriguing ones is to learn more about Dark Matter (DM).
We do not know much about DM except we see evidence that tells us it should be there. The study of milli-charged particles may provide a way for scientists to untie the “dark” knot.

In 2017, a 1% scale "demonstrator" of the proposed detector was installed on site to study the feasibility of the experiment. Understanding various background sources is fundamental, especially when looking for particles with such a low charge. The data from the demonstrator provided the opportunity to understand these backgrounds and optimise the design of the whole detector.
Today, the milliQan detector is officially part of the CMS experiment, and its installation and commissioning is taking place right now. The bar component has been placed inside an existing tunnel above the experimental cavern, and it has been oriented to look at the CMS interaction point (IP) 33 m away. This distance includes 17 m of rock shielding to suppress beam backgrounds. The bar, in word and deed, has a square base of about 0.4m ×0.4m and a length of more than 3m, and it consists of a series of 4 plastic scintillator arrays. Each array contains 16 plastic scintillators 60cm long coupled to high-gain photomultiplier tubes. The length and material of the scintillators have been carefully decided to maximise the chances to produce light when milli-charged particles pass through them. The organisation of the arrays in series, helps discern the background noise given from other sources than the beam, for example, by cosmic rays. Together with the bar, there is a second component making the milliQan: the slab. Its design is also based on plastic scintillators but of different shapes and dimensions and will be installed in the following months. While the slab will be able to look for a wider range of milli-charged particles, the bar, with its long plastic scintillators, is dedicated to the seeking of lowest charged ones.

The milliQan detector is the first detector of its kind looking for collision at more than 13 TeV and in part operative. Who knows what the future holds, but with milliQan we may have a new way to “see” in the dark.