New study of rare B meson decays to two muons 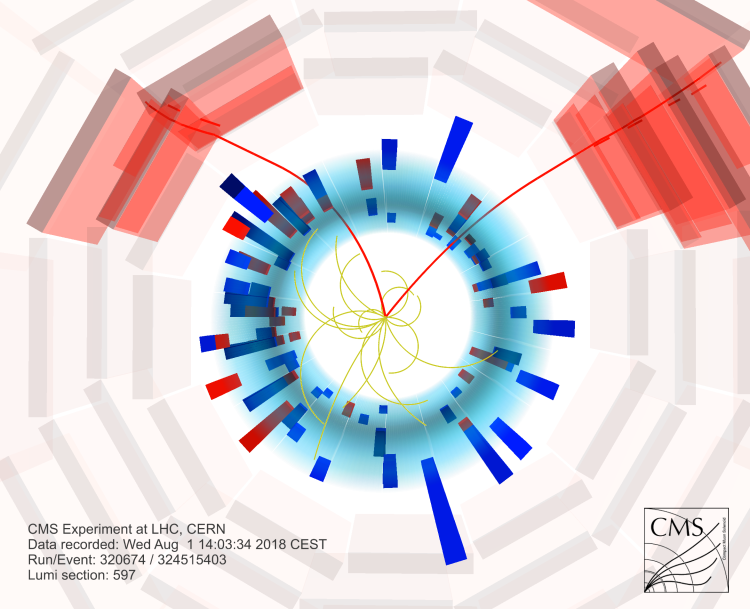 Rare events, such as a total solar eclipse or a supernova explosion, are fascinating and stimulate our imagination. In addition, such events may lead to discoveries expanding our ​​knowledge horizon. At the Large Hadron Collider (LHC), studies of rare processes could allow us to infer the presence of heavy particles that cannot be directly produced at the collider. Such particles are widely anticipated to exist in models that are trying to explain the phenomena that remain an enigma in our present picture of the universe, known as the standard model. These phenomena include the existence of dark matter, tiny masses of the elusive particles known as neutrinos, which were thought to be massless, and the matter-antimatter asymmetry in the universe, which contradicts the initial balance predicted right after the Big Bang.

The likelihood of success of these rare decay searches is greatly increased when we explore processes that we understand well theoretically and measure precisely experimentally. One of such processes is the rare decay of neutral B mesons to a muon-antimuon pair, μ+μ-. There are two types of such B mesons: the B0 meson that consists of a bottom antiquark and a down quark, while for the Bs meson the down quark is replaced by a strange quark. In the standard model of particle physics it is predicted that only one in 250 million Bs mesons will decay into a muon-antimuon pair; for the B0 meson, the process is even more rare, with only one in 10 billion. However, if there exist new heavy particles, their effects through the quantum corrections (the so-called quantum loops) may significantly change the rate of these decays. This potentially makes the studies of rare B meson decays an important discovery tool!

Figure 1: Visualisation of a Bs → μ+μ- candidate in Run 2 data (try zooming/rotating). The two red lines correspond to the two muons from the Bs  meson decay.  Other curved lines represent charged-particle tracks originating from the same collision point  as  the B candidate.  Tracks from other interactions in the event have been  removed for clarity.

There are multiple reasons for interest in these very rare processes. The original motivation was to look for new particles that could lead to a large increase in this rare decay rate. Such particles are predicted by a number of new physics theories, most notably, supersymmetry. More recently, a number of anomalies have been observed in other rare B meson decays, with the discrepancies between the theoretical predictions and data approaching the discovery level. The Bs → μ+μ- process is potentially also affected by the same new particles and thus may help to understand the nature of these anomalies.

The experimental confirmation of these decays has been sought since the 1980-ies by many experiments at different accelerators all around the world. Only recently, in 2014, the first observation of the Bs0 → μ+μ- decay was reported in a combined analysis of data taken by the LHCb and CMS Collaborations, which was later confirmed by the ATLAS, CMS, and LHCb experiments individually. The B0 → μ+μ- decay still escapes our attempts to observe it. The CMS experiment has made public a new study of the decay rate and the lifetime of the Bs → μ+μ- process and a search B0 → μ+μ-  decay using large amounts of data recorded in 2016-2018, in the so-called Run 2 of the LHC. The new study benefits not only from a large amount of data analysed, but also from advanced machine learning algorithms to uncover the rare signal events from the overwhelming background. The extreme sensitivity of the algorithm makes it challenging to understand and simulate the detector response. To avoid biassing our measurements, we used dimuon decays with one or two extra kaon particles to calibrate the detector and simulated data.

The results of the data analysis have revealed a very clear signal of the Bs meson decaying to a muon-antimuon pair. The precision of the decay rate measurement exceeds the one that has been achieved in previous measurements in other experiments. A candidate event for this decay as reconstructed in the CMS detector is shown in Figure 1. The signal is evident as a sharp mass peak in Figure 2, which corresponds to the mass of the Bs meson. The decay probability is found to be 3.8 ± 0.4 parts in a billion. Despite this very convincing observation, we still see no evidence of the B0 meson decay into this rare channel, which allows us to state with 95% statistical confidence that this decay rate is less than 2 parts in 10 billion. 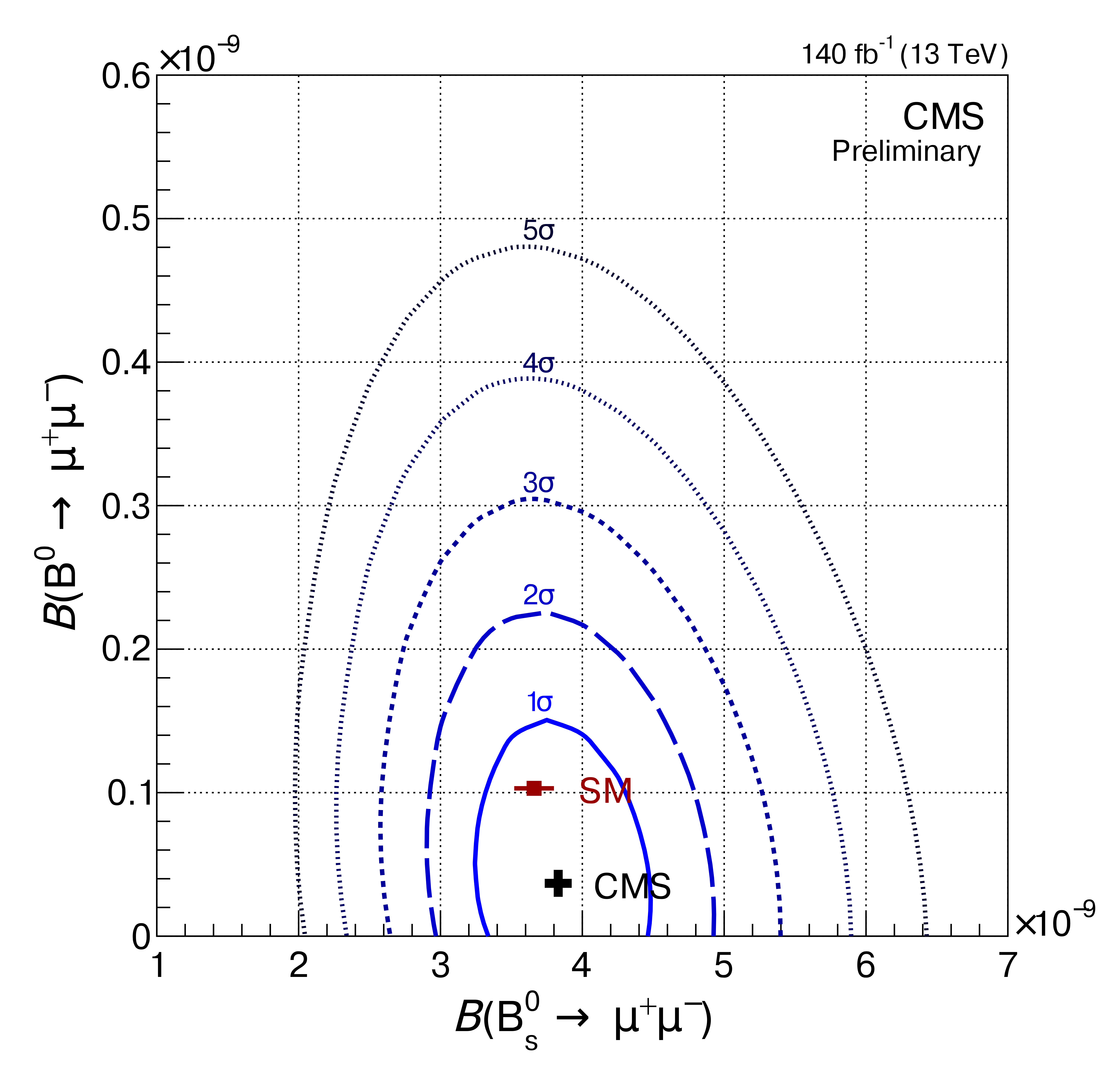 Figure 3: The profile likelihood scan as a function of Bs → μ+μ- and B0 → μ+μ- decay branching fractions. The contours in 2D enclose the regions with 1-5 standard deviation coverage, where 1σ, 2σ and 3σ regions correspond to 68.3%, 95.4%, and 99.7% confidence level, respectively. The standard model (SM) theory prediction is shown with the red marker and our measurement (CMS) is shown with black one.

The observed Bs decay rate in this rare process is very close to the theoretical prediction, as shown in Figure 3. Compared with the most recent LHCb measurement, our result is even closer to the theory, thus decreasing the overall tension in the present B decay anomalies. The new measurement will therefore play a major role in the further understanding of these anomalies.

The measured Bs meson lifetime in this rare decay is found to be 1.8 ± 0.2 picoseconds, which is also consistent with the theoretical prediction. The precision of this measurement has achieved the level of accuracy necessary to also look for the effects of new particles not only via the rate of this decay, but also by using the lifetime, which could differ from the nominal prediction in models that aim to explain the matter-antimatter asymmetry in the universe.

"This result marks a new milestone in our quest in understanding possible flavour anomalies recently reported by several experiments. It would not have been possible without a large data set successfully delivered by the LHC Run 2, spectacular performance of the CMS detector, and the ingenuity of physicists who have done this complicated cutting-edge analysis," says the CMS Spokesperson Luca Malgeri.

Further studies of these rare decays continue to be of great interest. With the Bs → μ-μ+ decay having been firmly established and measured with high precision, our sights shift on the ultimate prize: the B0 → μ-μ+  decay. With the large data sets anticipated in the next few years of the LHC Run 3, which is starting now, we might catch the first glimpse of this extremely-rare process and learn more about the puzzling anomalies and the very physics beyond the standard model.