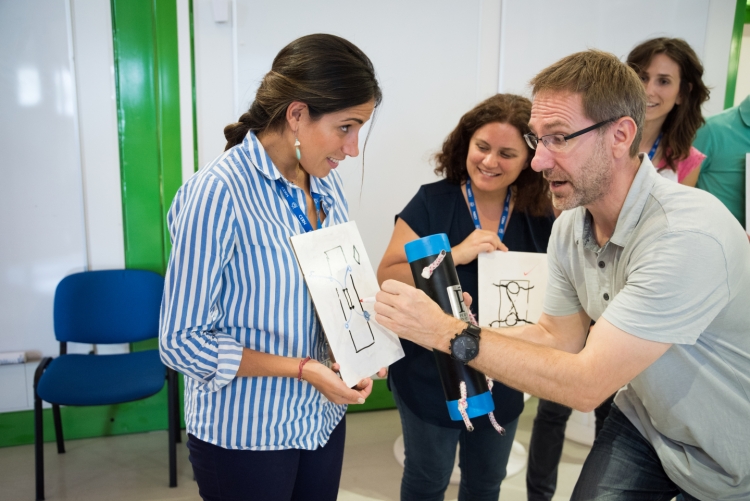 A new, open access paper, published inPhysics Education, presents the development, implementation and evaluation of an innovative training course that started at CERN in 2016 under the name 'Playing with Protons' with the aim to inspire, educate and empower primary school teachers to engage effectively upper primary students with modern physics, scientific discovery and innovation.

Inspired by the vision to enhance the educational footrpint of large research infrastructures like CERN, 'Playing with Protons' was developed in the framework of the recently completed CREATIONS project and was piloted in 91 schools in Greece and the UK with the active involvement of 183 teachers and more than 5,000 students. As described in the paper, the diversity and breadth of inquiry- and creativity-based learning activities led by the teachers who took part in the training courses at CERN was immense. Notably, some of those activities received awards and recognitions at national and international competitions, including the 2018 Particles4U competition organized by the International Particle Physics Outreach Group (IPPOG).

According to the evaluation results presented in the paper, 'Playing with Protons' not only increased teachers' interest in physics, but also boosted "their creative confidence to introduce primary students to various scientific processes and discovery endeavours into the microcosmic world of particles as well as the macrocosmic universe". In addition, the course helped create teacher online communities of interest in Greece and the UK, through which learning resources developed by teachers, such as lesson plans and educational scenarios, are freely available to anyone interested in primary physics.

The paper argues that the strength of 'Playing with Protons' rests on the collaborative efforts of key actors "willing to exchange knowledge and expertise, and to combine human and other resources to achieve common goals". These actors include the CMS and ATLAS experiments at CERN, IdeaSquare at CERN, and external partners and funders including The Ogden Trust, The Stavros Niarchos Foundation, The Perimeter Institute, the University of Birmingham, and the Science and Technology Facilities Council. Therefore, as the paper concludes, "'Playing with Protons' is more than a training course; it is an emerging collaborative community governed by an ethic of interdependent contribution to a shared purpose, that is the effective engagement of all primary students with modern physics, scientific discovery and innovation".