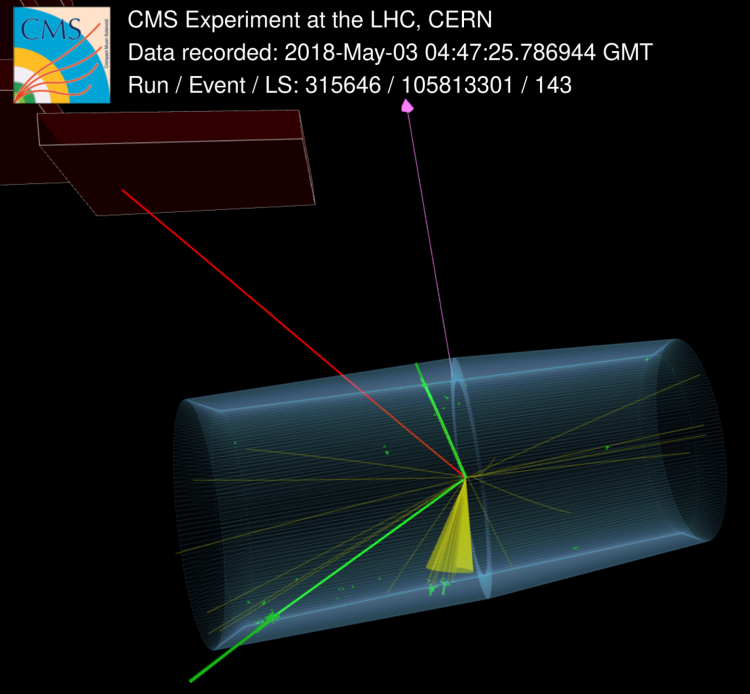 Since the discovery of the Higgs boson (H) in 2012, the ATLAS and CMS experiments at the CERN-LHC have made significant progress in understanding the properties of this new particle. It has zero spin, in agreement with the prediction of the well-established theory of fundamental particle, the “standard model” and a mass of 125 GeV (that is about 125 times the mass of a proton).

The standard model also makes very precise predictions about the interactions of the H with different types of fundamental particles, including itself. The strength of this interaction is generally referred to as the “coupling” of the H, which, in turn, dictates the mass of a given particle. This feature has been already confirmed experimentally for about half of the fundamental particles, but not yet for the H itself.

In the standard model, the self-coupling of the H is crucially related to the mechanism for breaking the symmetry of the electromagnetic (mediated by the photon) and the weak (mediated by the W and the Z bosons) interactions, the main reason why theorists “invented” the Higgs boson in the first place. Hence measurement of this self-coupling is extremely interesting and is considered as an important mandate at the LHC. The self-interaction of the H can be tested through the production of a pair of Higgs bosons (HH) at the LHC. However, the task is extremely daunting since the rate of production of HH pair is extremely small. From 2015 to 2018 (the “Run 2” operation of the LHC) about 10 trillion (that is 10 million times a million!) proton-proton collisions occurred in the CMS detector. But, according to the standard model, in only about 4000 of them HH pair production is expected.  Additionally, the H decays almost instantaneously; we identify the Higgs boson events using the particles generated in its disintegration process. Hence the study of HH pair production at the LHC is quite a challenge, since there are numerous physics processes that produce similar events in the detector; we call them background events.

Previous searches for HH pair production considered cases where at least one H decays to a pair of bottom quarks, the most frequent H decay mode, resulting in a larger number of potential HH pair signal events in data. In a new study, scientists in the CMS Collaboration focused on the H decay modes that produce multiple leptons (electrons, muons, and/or tau leptons) and missing energy related to the neutrinos. These modes include each H decaying to a pair of W bosons or a pair of tau leptons that are themselves unstable. The resulting cascade of particles is reconstructed systematically to be able to identify events corresponding to the production of HH pair, using advanced machine learning techniques. Now the HH pair decaying to multiple leptons is not as common as the other decay modes that include bottom quarks, but background events with multiple leptons are not very common in general. Although less than 200 collision events, which might contain HH pair decaying to multiple leptons, were found in the full of Run 2 data volume, these events were sufficient to constrain the possible values of the self-coupling of the H. The existence of physics beyond the standard model may result in an anomalous coupling that would modify the event rate, typically to values larger than expected. 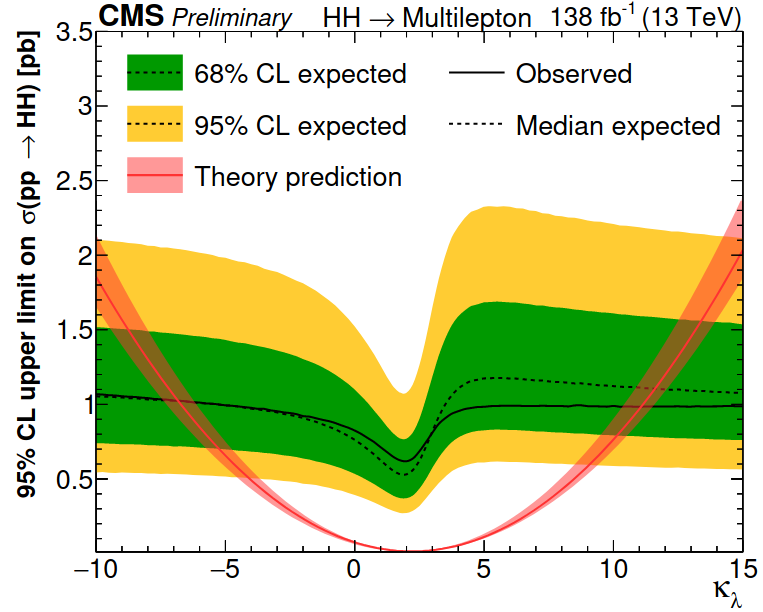 Unfortunately, no evidence for HH pair production is found in the CMS data, but this new search restricts the range for the strength of the Higgs boson's self-coupling. The solid black curve in Figure 1 shows the measured upper limit on the rate of HH production (vertical axis) using Run 2 data events with multiple leptons, as a function of 𝜿𝝀 (horizontal axis). The dashed black curve shows the result that CMS expected to see, before making the measurement, on the basis of simulations of the detector performance and considering the size of the collected event sample. By comparing the CMS measurement with the HH pair production rate predicted in the standard model (represented by the red band). From the intersection of the red and the black curves, it is concluded that the strength of the self-coupling of the H must be between -7.0 to 11.2. 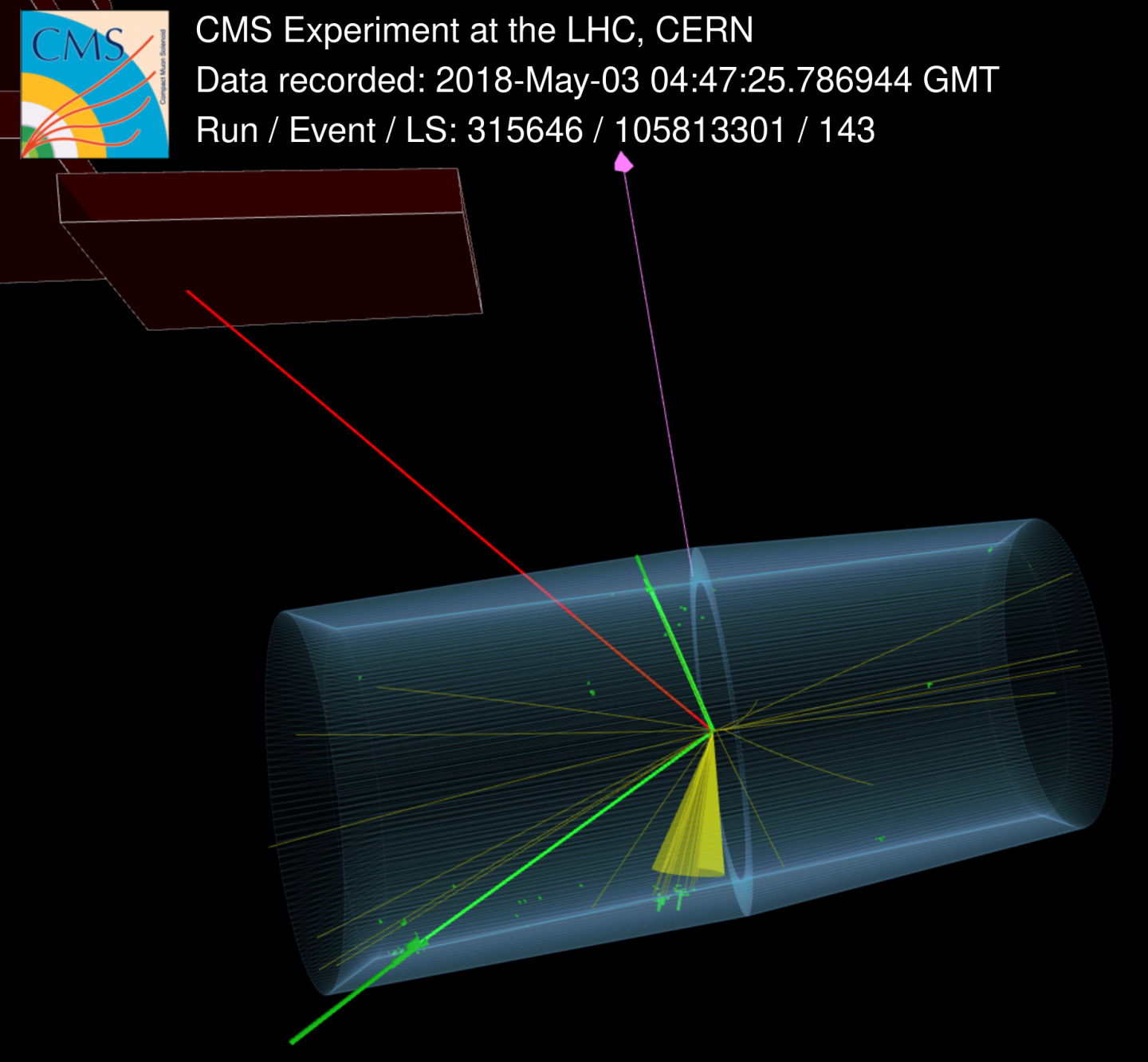 Figure 2: One of the events observed in the CMS detector that can be interpreted as being a pair of Higgs bosons (HH) produced with an exceptionally high HH pair mass. In this interpretation, each Higgs boson decays into a pair of W bosons with subsequent decays producing two electrons (green lines), one muon (red line), two hadron jets (yellow cones), and three neutrinos. The neutrinos of course escape detection resulting in net missing energy; the component of this vector transverse to the proton beam direction is represented by the pink line. Additional particles are shown as yellow lines.

The reconstructed system of the Higgs boson pair in data showed an interesting feature when compared with the simulations. There are slightly more events in data with high HH pair mass values than expected!  An example of a high-mass event with multiple leptons, recorded in the CMS experiment, is shown in Figure 2. Does this correspond to a new particle that decays to a pair of  Higgs bosons? Perhaps! However, other analyses from the CMS experiment looked for HH pair events in which at least one of the Higgs bosons decayed to bottom quarks and found no such excess in the HH pair mass distribution. More data and effort will reveal the truth. Stay tuned!