A shot in the dark: Can jets recoil against Dark Matter? 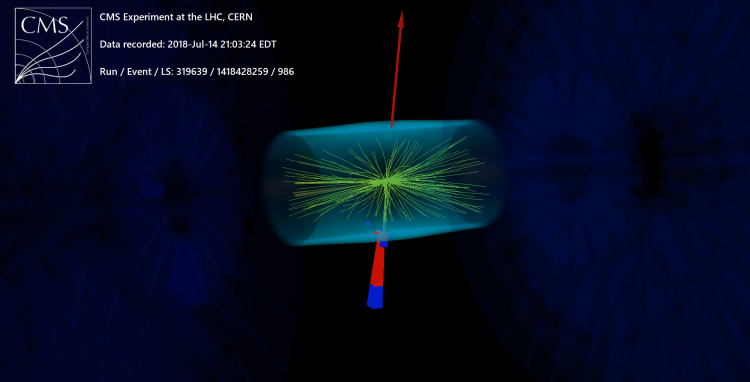 A shot in the dark: Can jets recoil against Dark Matter?

In their 2020 hit single ‘A Shot in the Dark’ the rock band AC/DC got it right in many ways:

“A shot in the dark

A shot in the dark

All through the whole night”

The authors of this analysis have been feeling great, toiling away long nights in search for a shot in the dark, looking for a single, energetic jet that is visible in an otherwise dark detector, but let's start from the beginning.

For many decades, astronomers have been finding more and more clues that suggest the existence of a new type of matter. Among other things, they try to explain how far-away galaxies are shaped, how they move over gigantic distances, and how they might have formed in the first place. It turns out that the behaviour of our universe only makes sense if -- in addition to the matter we see through our telescopes -- there is also another type of matter that does not show up: dark matter. Like ordinary matter, dark matter interacts gravitationally, but it does not seem to obey other interactions like, for example, light does not scatter off it. One of the most critical questions in physics today is what this dark matter is made of.

In this analysis, we use event recordings in which large transverse momentum imbalances are seen in conjunction with large energy depositions in the form of sprays of particles, which we call jets. Jets are the most common object in collisions recorded at the LHC and ultimately result from quarks or gluons (the elementary building blocks of the atomic nucleus) instantly transforming into jets. The particles produced in the process called hadronization tend to form a conical bundle and point in the direction of the original particles. We focus on the cases where the jets originate directly from quarks and gluons, or from the decay of W or Z bosons to a quark pair. The jets tend to be narrow when they arise from a quark or gluon directly, and the particles in the jets are further apart when the jets instead originate from W or Z bosons that convert into a quark pair. We use deep neural networks to distinguish these cases to interpret the analysis in different dark matter models and make the analysis more sensitive.

Figure 1: A particle collision with a high energy particle jet and significant transverse momentum imbalance recorded in the CMS detector. The initial particle collision happens in the center of the image, where the green lines meet. The jet is represented by the solid blue and red shapes towards the top of the image, which show the energy of the jet as measured directly by our detector. The red arrow at the bottom of the image indicates the imbalance of momentum. It points in the direction where undetected particles might have gone.

Once we find collisions that look like they could have dark matter particles in them, we have to overcome one last obstacle: background. Background refers to collisions that look like dark matter was made, but actually only contain particles we already know. The most important source of such background events is the production of particles called neutrinos. Like dark matter, neutrinos do not interact with our detectors and thus cause the same type of imbalance. To account for this background, we precisely predict how often such standard model collisions occur and subtract them from the total observed collisions in our data. We can only claim the observation of dark matter if there is a significant remainder of events after all such background is removed. 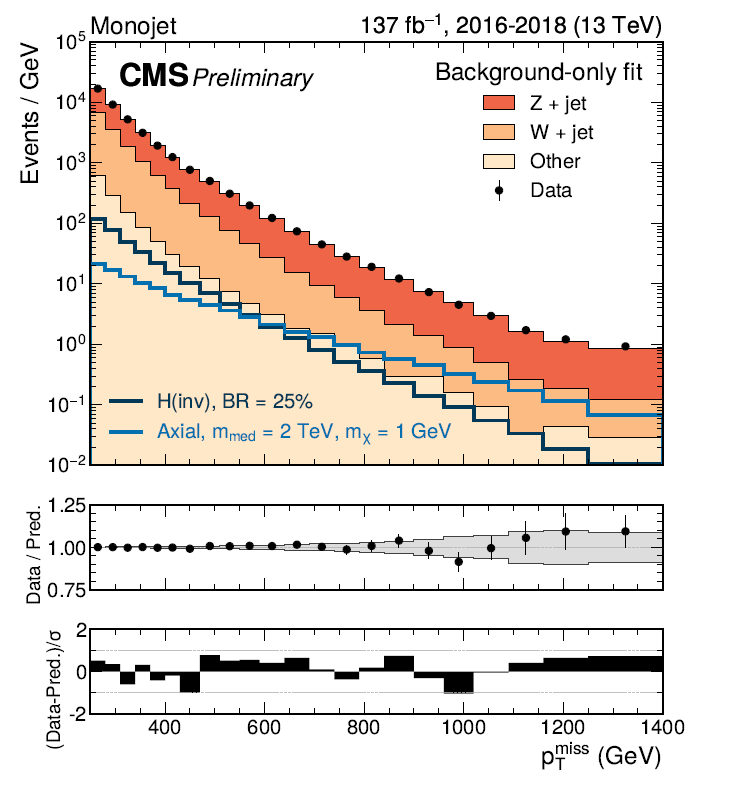 Figure 2: Comparison between background prediction (colorful shapes) and data (black markers). The figure shows data taken in 2016-2018. The points show the ratio of data to our final background prediction in the middle panel, and the grey shape is the uncertainty (σ). The data agree very well with the background we predict, which means that we see no significant production of dark matter particles.

A comparison of our predicted background and the data we measure in collisions is shown in Figure 2. We find that our prediction agrees very well with the data, which means that we did not find any dark matter particles. That could mean that no dark matter is produced at the LHC at all, or just that it happens too rarely for us to detect it yet. To document our search for dark matter production, we use this analysis and its known sensitivity to exclude a part of the hypothetical explanations for dark matter. Our search is based on jets, which are relevant in a wide range of new theories, and thus constraints are placed on a wide range of theories. There are fewer and fewer places where dark matter can be hiding.

In 2022, the LHC will start its next data-taking period (Run 3). A few years later, the high-luminosity LHC (HL-LHC) will follow with substantial upgrades to the accelerator and detectors. There, we will analyze about twenty times more collisions than in this analysis using our shot-in-the-dark signature to discover dark matter particles and maybe, just maybe, get a glimpse at the origin and behaviour of galaxies all across the universe.