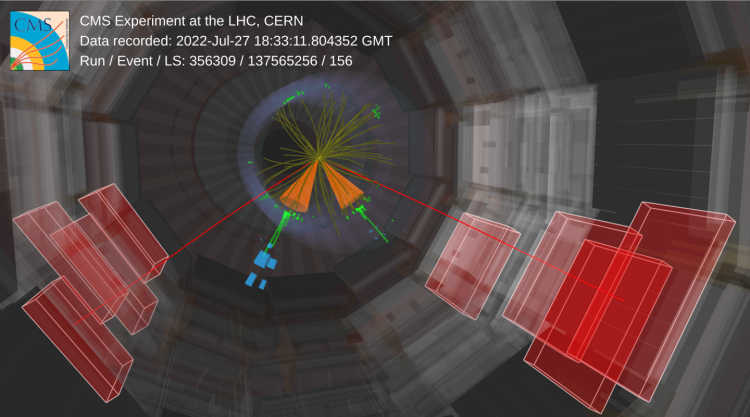 On 5 July 2022, the LHC surpassed the previous energy limits of experimental particle physics, breaking its own record by achieving stable proton-proton collisions at a center-of-mass energy of √s = 13.6 TeV. This marked the start of Run 3, the third period of extended data-taking by CMS and other experiments at the LHC.

The start of Run 3 was an exciting but demanding moment for those working on the LHC experiments. After over three years of maintenance and upgrades, an astounding collection of technology supervised by different teams of scientists, engineers, and technicians must function together almost perfectly in order to obtain high-quality scientific data. Not unlike when the many instruments of an orchestra assemble to perform a new symphony, there is a great joy in seeing this massive collaborative effort working in harmony, coupled with sighs of relief when everyone is hitting the right notes.

Indeed, the CMS Collaboration is enacting just the performance they strived for in 2022, with data-taking running smoothly and the detector operating as expected. To highlight this success, CMS presented a measurement of the top quark pair production cross section using Run 3 data at the 15th International Workshop on Top Quark Physics, in Durham, UK. This marks the first preliminary physics measurement to be announced at the energy of 13.6 TeV, kicking off a new stage of the LHC physics program.  “This first publication with Run 3 data underlines that CMS has been recording high-quality data from day 1, and we are excited to work towards uncovering all the new and improved results that the Run 3 data taking has in store for us”, said Patricia McBride, the CMS experiment Spokesperson.

Figure 1: Visualization of a top quark pair event candidate. The event is identified based on the detection of two high-energy muons and two b-quark jets. Other curved lines represent additional particles produced at the interaction point. You can view (zoom/rotate) the interactive event display on this separate page.

The top quark is the heaviest known fundamental particle, with a very short lifetime and a diverse set of particles in its decay (Fig. 2). The LHC is currently the only collider in the world capable of producing these special particles, and it does so in abundance. In just a few days of LHC operation, around one million top quark-antiquark pairs can be recorded by the CMS detector. Due to its high mass, the top quark is often considered as a portal to new physics models that may appear as we reach higher energies. Thus, its behavior in any new energy regime can either corroborate or dispute our understanding of the way particles interact in such extreme conditions.

One fundamental property we can scrutinize is the rate of top quark pair production at the new energy. This number, encoded in what physicists call the cross section (or σtt̄) is expected to rise by about 10% at the new center-of-mass energy of 13.6 TeV, compared to the previous LHC operating energy of 13 TeV. This offers one of the first predictions that can be tested at the new LHC operating energy, with which we can begin to distinguish the physics of the new energy frontier from those of previous LHC runs (see Fig. 3). 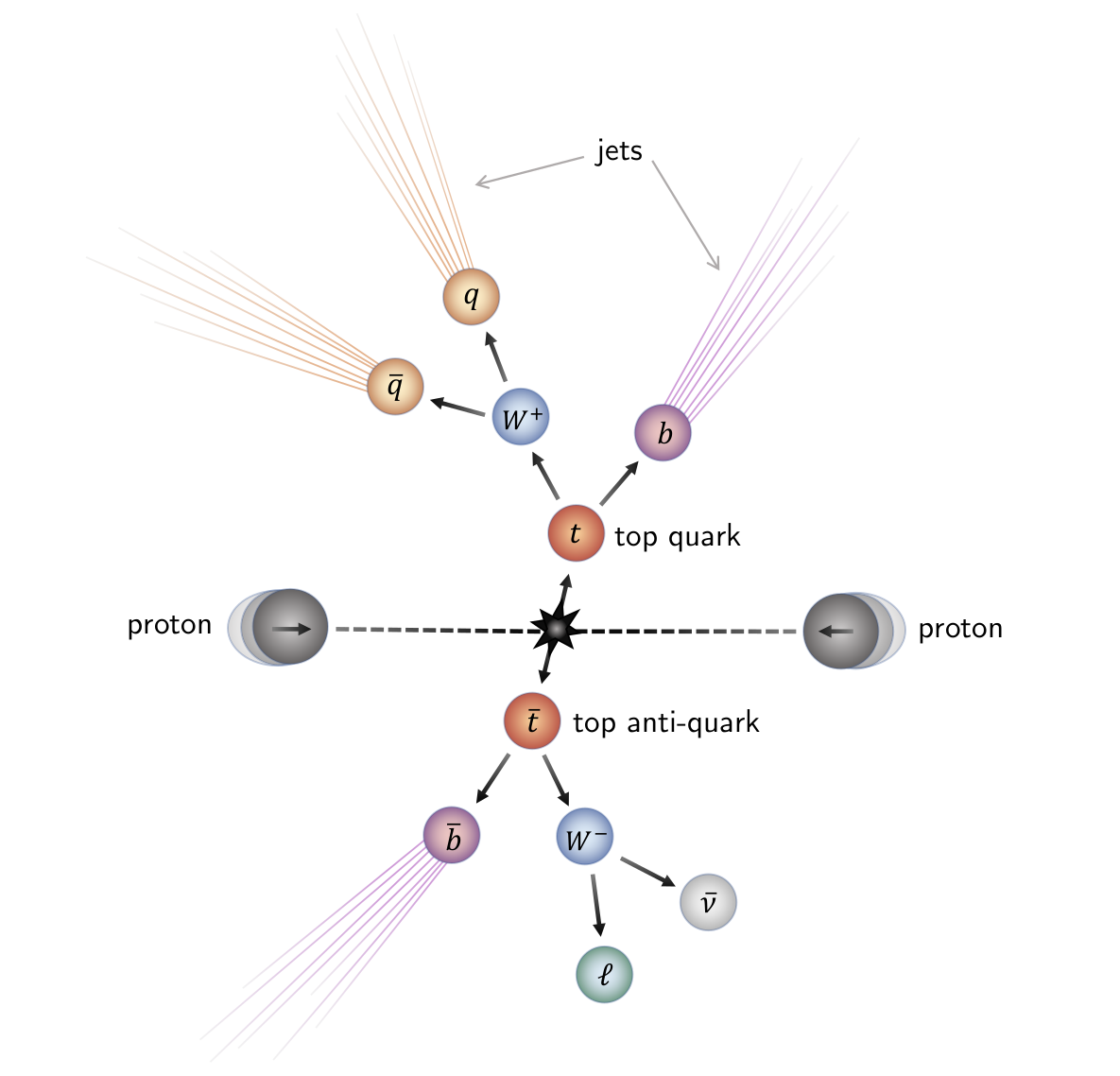 Figure 2: Diagram showing a top quark pair decaying into a final state containing one lepton (electron, muon or tau particle) and four jets. Each top quark decays into a b-quark and a W boson. The W boson has the possibility to decay hadronically (into two light quarks detected as jets), or leptonically (into a lepton and a neutrino). In this diagram, one W boson decays hadronically and the other leptonically, while Fig. 1 features an event with both W bosons decaying leptonically.

Top quarks are highly unstable, and decay (see Fig. 2) before having the chance to interact with other particles and form more complicated bound states. The immediate decay products are also unstable, leading to a sequence of decays before the production of longer-lived particles that can reach the detector components. The result is a unique menagerie of final state particles, including high-energy leptons, which can be cleanly reconstructed by the detector, as well as b-quark jets, which can be used to distinguish top quark pair production from other processes. Together, these final state particles leave traces in each main component of the CMS detector, and allow them to stand out from the mountains of other collision data also recorded. They also serve as a useful tool for testing the performance of the detector components, giving the unique opportunity to calibrate the detector response in tandem with a cross section measurement. 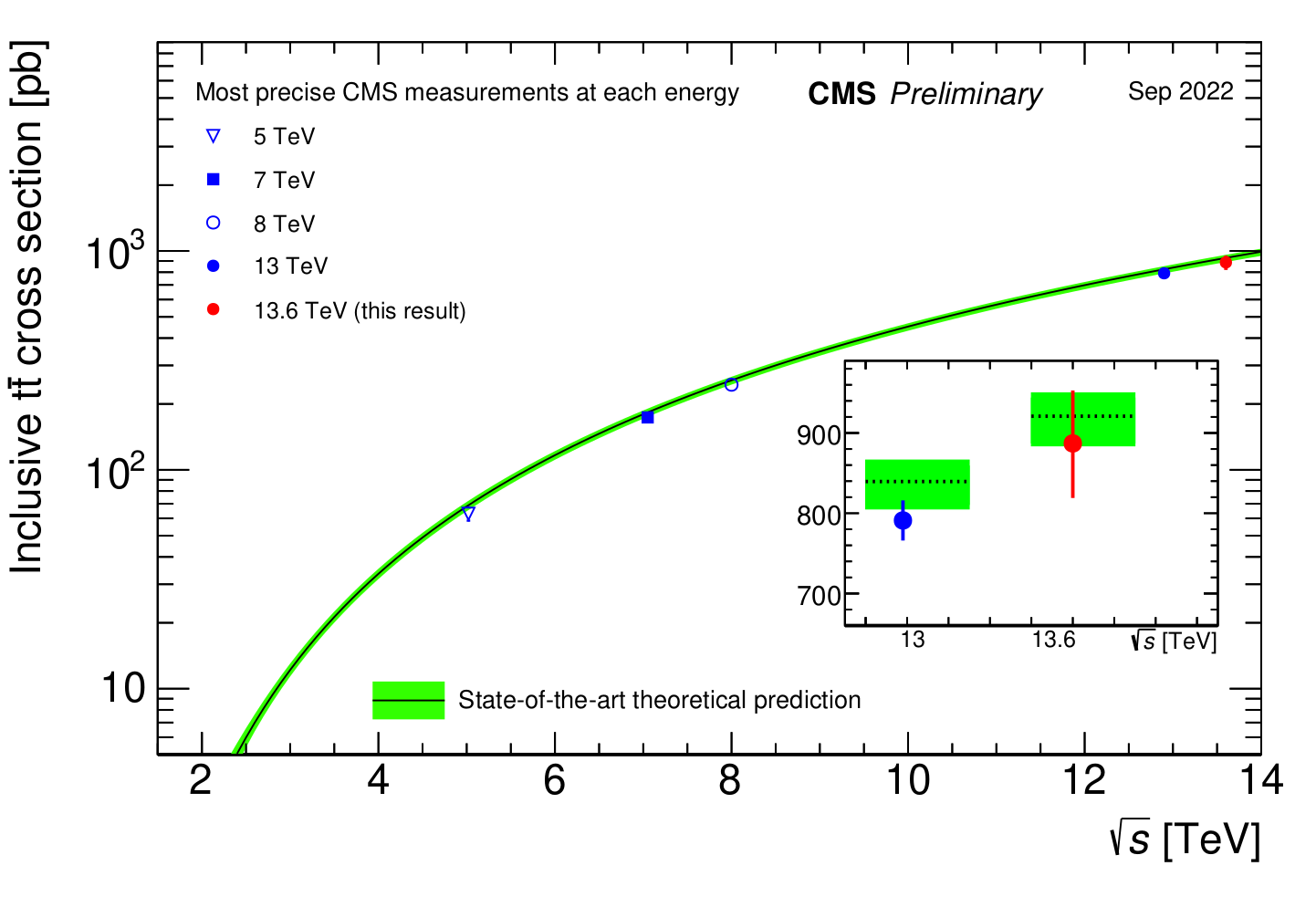 CMS used a variety of final states to develop a unique and efficient measurement strategy, finding the value of the top quark pair production cross section to be 887 ± 68 pb at 13.6 TeV, a result consistent with our best theoretical prediction. This is the first measurement of the heaviest known particle at the highest energy collisions ever produced in a controlled lab environment. It represents the first drop of what will soon become a steady flow of scientific output from the LHC experiments as Run 3 progresses. It also demonstrates that CMS is fully prepared to study physics at the new energy frontier for years to come, testing the limits of our understanding of the smallest objects known to exist.