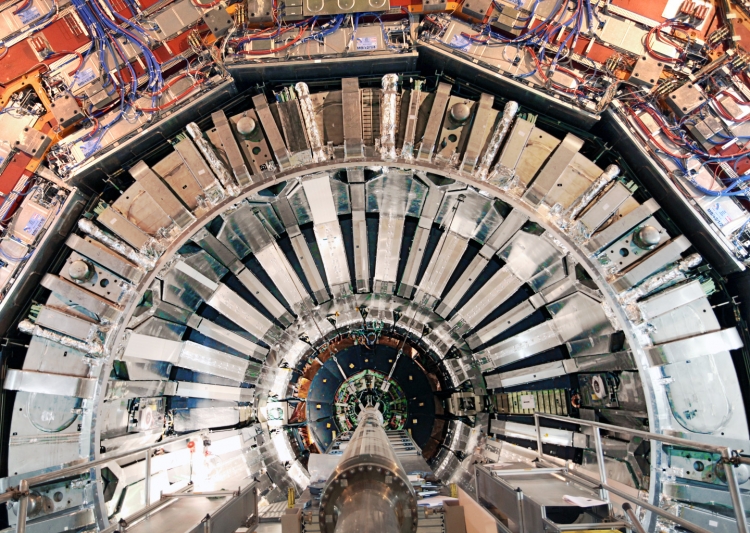 A detail of the CMS detector. Photo: Michael Hoch 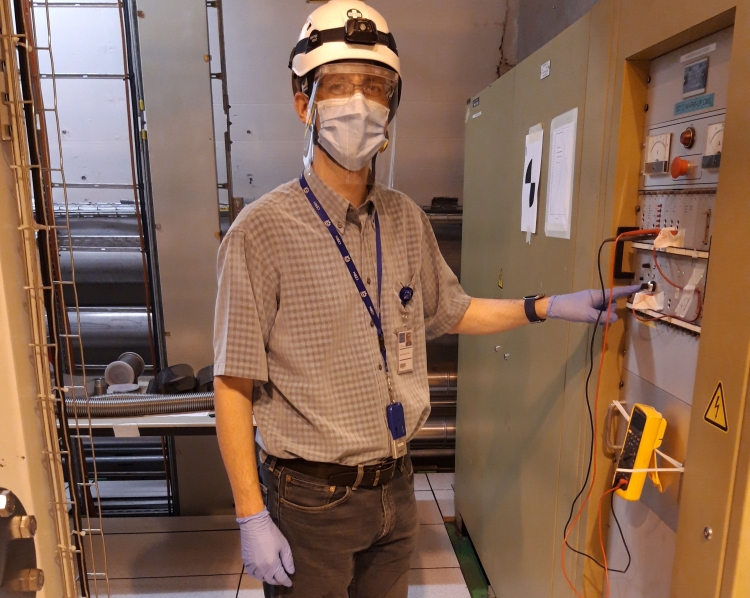 Benoit Cure in front of the warm up power supply: Credits Dragoslav Lazic

The CMS magnet, one of the largest superconducting magnets in the world, with the largest stored energy, has been warmed up in April-May 2020 in order to perform an intervention on the vacuum pumping system.
The magnet is a 220-ton cylinder cooled down to a temperature of 4 Kelvin (-269°C), designed to provide a magnetic field of up to 4 Tesla in a cylindrical volume with a diameter of 6 metres and a length of 12.5 metres. It sits inside a cryostat that provides the thermal insulation to limit the heat inputs due to thermal conduction, thermal radiation and convective heat transfer. Inside this cryostat there is an insulation vacuum, obtained by a pumping system made of two primary pumping groups and two diffusion pumps. The diffusion pumps give a vacuum below 1e-6 mbar (a billionth of the atmospheric pressure) and they are directly connected to the cryostat.

In October 2019, during a tightness check of the high vacuum valve between the main diffusion pump and the cryostat volume, a water leak was discovered coming from the pump water cooling circuit. Changing the pump when the magnet is cold is a delicate intervention that has never been done, because of a difficult access to the pump on top of the central barrel wheel of CMS , and due to the high risk of breaking the insulation vacuum with ambient air during the removal. It was therefore decided to warm up the magnet to room temperature to perform this intervention.

The warm up was done supplying a current of up to 300 A to the magnet. As the magnet is no longer superconducting above a temperature of 10 K, Joule heating was produced directly inside the coil. This method ensures a uniform heat dissipation in the coil’s windings, limiting the temperature gradients inside the coil’s structure. It also has the advantage of allowing a tuning of the power dissipated by setting the electrical current value. The operation was performed when there was no activity in the experimental cavern that could have been disturbed by the small magnetic stray field.

The warm up to room temperature was already achieved successfully in the past, during the LHC long shutdown LS1 in 2013, and before, during the magnet installation and commissioning. This year the warm up was more critical due to the reduced pumping capacity, having only one small diffusion pump working instead of two. It took about 40 days to warm up the magnet, limiting the pressure rise in the cryostat, due to outgassing of cryo-pumped molecules released with increasing temperature, by reducing the magnet current.

Now with the magnet successfully brought back to room temperature, the pumping will continue to remove the remaining humidity in the cryostat. Then the vacuum volume will be filled with dry gas at atmospheric pressure before the removal and replacement of the faulty diffusion pump.
A consolidation of the pumping system is planned, together with a general inspection of the magnet, before the cooldown planned in spring 2021.