Being a physicist for a day! 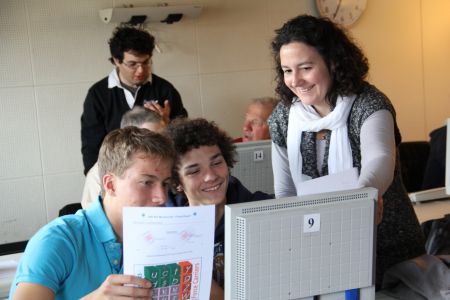 On Monday, 12th March 2012, 16 high-school students from Annecy, France awoke with excitement; they knew it was not going to be an ordinary day!

Although they live only 40 km away from CERN, the students had never visited the laboratory, and on this day they were in for much more than a normal visit. They crossed the border from France into Switzerland to take part in the International Masterclasses 2012.

The International Masterclasses is a framework developed by IPPOG (International Particle Physics Outreach Group), which gives 16- to 18-year-old students from around the world the opportunity to take part in an authentic research process, analysing real data from the LHC. It offers students the chance to close their textbooks and experience modern science first-hand.

The adventure began as the bus entered the main CERN entrance. The students were welcomed by CMS physicists, who had taken a break from their daily activities to guide the students throughout the day. The morning session had two talks aimed at introducing particle physics, the LHC and CMS, and prepared them for the hands-on exercise, which took place in the afternoon.

If you are a physicist, you know that lunchtime is crucial to the everyday life of a physicist – it provides (yet another) occasion to discuss physics! This was true for the 16 physicists-for-a-day as well. Everybody gathered around many pizzas to discuss very important questions like: “How can I become a physicist?” and “What will discovering the Higgs boson change in physics?”

The afternoon session then provided the opportunity for these budding scientists to look at real (carefully selected) CMS data. Pairs of students studied real experimental data, analysing nearly a thousand 7 TeV collisions in total using an online event display tool – iSpy-online – based on the original iSpy CMS software. The analysis was rather simple in principle – identifying whether events contained electrons or muons; measuring the charge of these leptons and determining if they originated from the decay of a W+, W– or Z boson (or something else!). But this led to some very deep physics indeed, gaining an insight into the inner structure of the proton and calculating the invariant mass of the Z boson.

The students learnt that an event display is a complex “snap shot” that physicists use to identify particles and check for problems etc. Furthermore, doing the measurements in pairs enabled them to discuss the evidence with their colleagues and to share their reasoning, like scientists do. When they were done, the CMS mentors combined the results from all the pairs and discussed the overall findings. For example, a plot of the invariant mass of pairs of leptons revealed not only a Z mass peak in the right place, but also a peak at lower mass. A comparison with the CMS di-lepton mass spectrum revealed that this lower peak was due to the presence of some Upsilon events in the data. The students also measured the ratio of W+ to W– production rates to be about 1.2 – not far from the CMS published result of 1.4!

As members of an international research collaboration do, the participants then discussed the combination of their results over a videoconference with other students, who were doing the same activity in Padova and Trieste (Italy), Split (Croatia), and Lodz (Poland).

The day ended with a final goodbye heard in five different locations around the world, and the young researchers returned home, enriched by their new experience. For some, this day may have an impact on their career choices, and it may not be their last visit to CERN and CMS!

Our special thanks go to all CMS volunteers for making this event such a success!