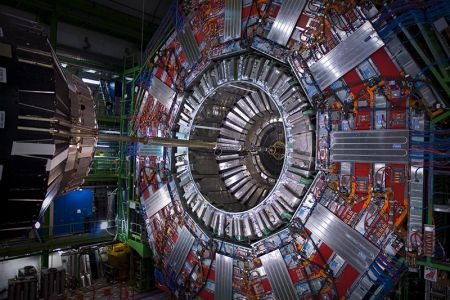 The particles that make up forces and matter are so small that if the nucleus of an atom were enlarged to the size of a tennis ball, a full stop (".") would be as big as the earth’s orbit of the sun. They are so infinitesimally small that no matter how hard physicists squint, they'll never see a quark with a microscope, let alone the naked eye. The key to studying the subatomic world is to use accelerators to boost the energy of particles before a collision, then make the results indirectly visible using detectors. But to appreciate why, we need to understand the incredible relationship between energy and mass.

Imagine you threw an unknown “mystery” ball at a target , and you wanted to know what type of ball it was. Knowing something about the target, the speed with which the ball bounces back and the track it makes when doing so, you might be able to deduce, for example, whether the ball is likely to be a small rubber ball or a heavy cannon ball. Using the same principle a particle accelerator throws particles with great speed and energy, while detectors provide information on the characteristics of the collisions. Physicists analyse the results of many collisions to gain an insight into the nature of the particles being studied, despite not being able to observe them directly.

To add to the challenge, in the rather bizarre world of particles, give the 'balls' enough of an energy boost and they may turn into something else entirely. That could be like shooting a ping-pong ball at a target to find it transforming into a truckload of watermelons and a handful of beads! This phenomenon is described by Einstein's famous equation E=mc2, which says that matter is a very concentrated form of energy and the two are interchangeable.

So when the Large Hadron Collider (LHC) collides simple protons at high energies, some of this energy converts into mass, creating exotic, heavy, short-lived particles. Particles like this were last common nearly 14 billion years ago, a tiny fraction of a second after the creation of the Universe at the Big Bang, and can open a window onto how our Universe was formed and how it is today.

How can accelerators and detectors “see” the subatomic world?

Our eyes can see objects because of visible light reflecting off their surfaces, but we can’t see particles with the naked eye because their sizes are smaller than one ‘unit’ (wavelength) of visible light.

Early in the 20th century it was discovered that moving particles of matter can also be considered as waves and that the wavelengths of these particles become shorter with increasing energy. This means that to study details a billion times smaller, we need to give particles energies a billion times higher. This forms the basic principle of how an accelerator can be used to measure the subatomic world.

Accelerating particles to high energies also allows us to see particles that would usually turn into other, more stable, particles too quickly for us to see them. This is due to another of Einstein’s great discoveries, Special Relativity, which tells us that when something travels fast, to stationary observers, its time appears to run slower. This effect is negligible at everyday speeds but for a particle travelling at close to the speed of light, time passes slow enough for the particle to travel much further than we would otherwise expect. This effect allows us to detect the beauty quark, which decays after just a picosecond (a trillionth of a second). At low speeds it decays quickly and doesn't travel through enough of the detector for us to see it, but when accelerated to near the speed of light, the particle covers a few extra millimetres: far enough for the detector to be able to spot it.

Sensing the subatomic is a job for giants

Something that may appear strange about particle physics experiments is the paradox between the sizes of the equipment and the subjects being investigated. Why does it take the largest machines to investigate something so unimaginably tiny?

The more energy you put into the particles, the more "stuff" (mass) can be created in a collision. And because the particles we are looking for are rare, the number of particles you collide must be high. As a result, studying particles that have never been investigated before often means building larger accelerators to reach higher energies and smashing particles together at higher rates. The history of particle physics may be traced back through a succession of accelerators and detectors of increasing sizes.

Similarly exciting collisions actually happen every day as high-energy particles from space hit particles in the Earth’s atmosphere, but the results go by, unobserved. What you need is a giant detector like CMS to analyse the results of the collisions. CMS’s huge size is dictated by the need to contain all the energetic particles produced in the collisions, and by the methods of identifying them.