A bound on the natural width of the Higgs boson 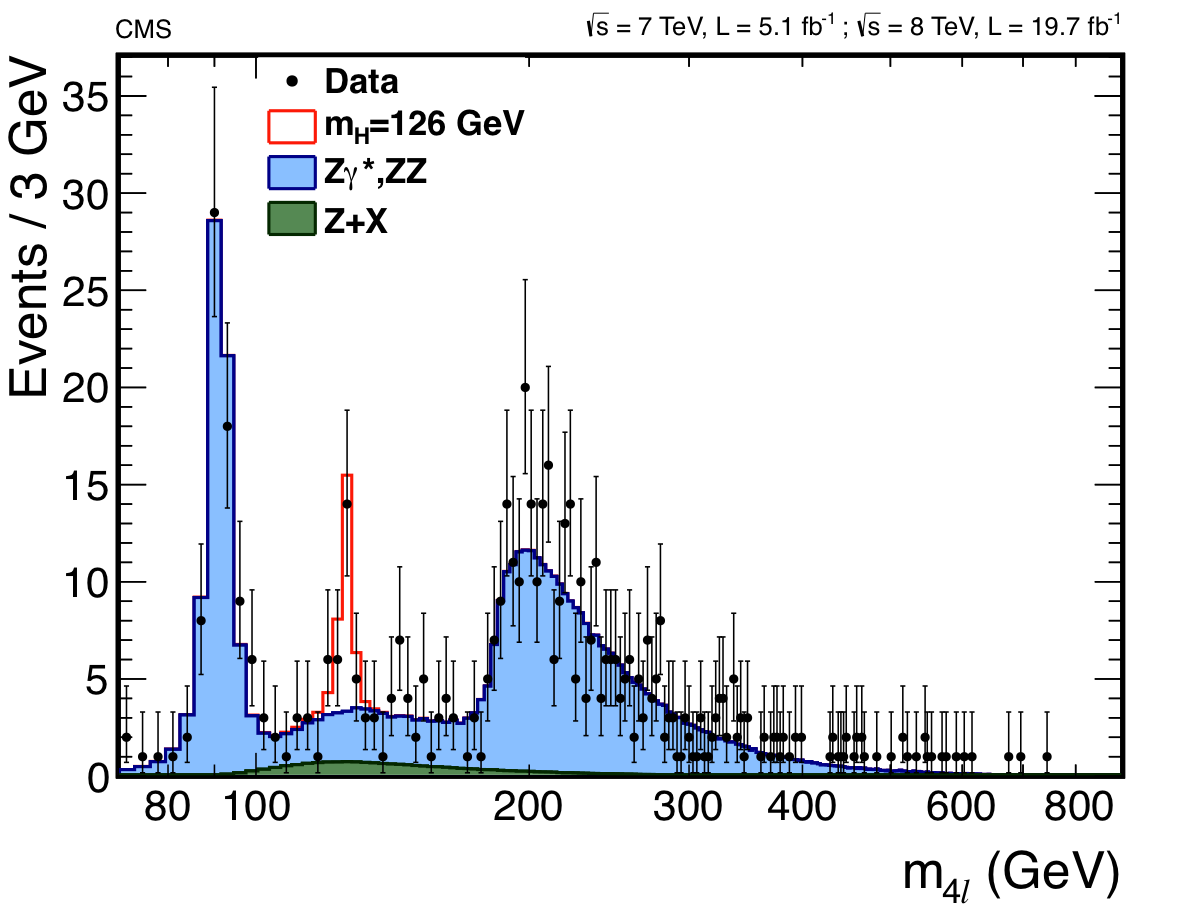 Figure 1: The observed mass distribution of two Z bosons in four leptons events. The points are the data, while the blue histogram is the distribution expected from direct ZZ production in the Standard Model. The red line with a central value around 125&amp;nbsp;GeV is the Higgs boson signal.

CMS has improved the constraints on the Higgs width, a fundamental property of this unique new particle, by more than two orders of magnitude.

Nearly two years after its discovery, there is much to learn about the Higgs boson observed by the CMS and ATLAS collaborations at CERN’s Large Hadron Collider. At the annual Rencontres de Moriond meeting, CMS presented improved limits on the “natural width” of the Higgs boson, a parameter related to the lifetime of the particle and crucial to understanding its nature.

The Heisenberg Uncertainty Principle implies that the energy, and thus the mass as well, of all unstable particles must have an uncertainty, which is inversely proportional to their lifetime. This uncertainty is quantified by the particle’s “natural width”, which characterises the range of masses with which a particle is observed. In the Standard Model, the Higgs boson is expected to be very narrow: its width is roughly 4 MeV, a good 30,000 times smaller than the central mass of approximately 125 GeV. The width of the Higgs boson is a very important parameter, for it is determined from the strength with which it interacts with all particles, including those that may exist but which we have not observed yet!

The width is usually determined from the distribution of masses observed. In this case, however, the expected width is much smaller than the experimental resolution of the mass measurement. As an example, in events with a Higgs boson decaying to two Z bosons, the masses reconstructed are shown in Figure 1. The Higgs boson signal, in red, appears over a range of values, which is dominated by the precision of the experimental measurement, and not the width of the Higgs boson. The best bound one could obtain directly from the Higgs peak in the data was that the width was less than 3.4 GeV.

Recently, there was a suggestion that one can measure the Higgs width indirectly, by concentrating on the tail of the Higgs mass distribution, at high values, above ~200 GeV and up to very high masses. And while it may seem strange that the distribution of Higgs masses may extend to values that are far away from the central mass of 125 GeV, the magic of quantum mechanics plays its role again. There is a sizeable contribution at high mass from Higgs bosons produced with high virtuality, due to the resonant decay in two on-shell Z bosons. Two effects result in further changes to the “normal” ZZ mass distribution at high masses when the Higgs width is altered, e.g. when it is increased: first, there is enhancement due to the coupling with the top quark which is very heavy, and thus, its effect is felt at high masses. Second, the final state can also be produced by “normal” ZZ production, i.e. from Z pairs produced directly from the proton-proton collisions without an intermediate Higgs boson, and these two paths to the same final state must interfere. This interference is large enough to be “felt” at very high masses.

The effect is shown in Figure 2, where the data are clearly incompatible with a value 25 times larger than the Standard Model prediction. A quantitative analysis leads to an upper bound on the Higgs width of ~4 times that of the Standard Model value, approximately 17 MeV. This is a huge improvement, of a factor of 200 over the previous bound!