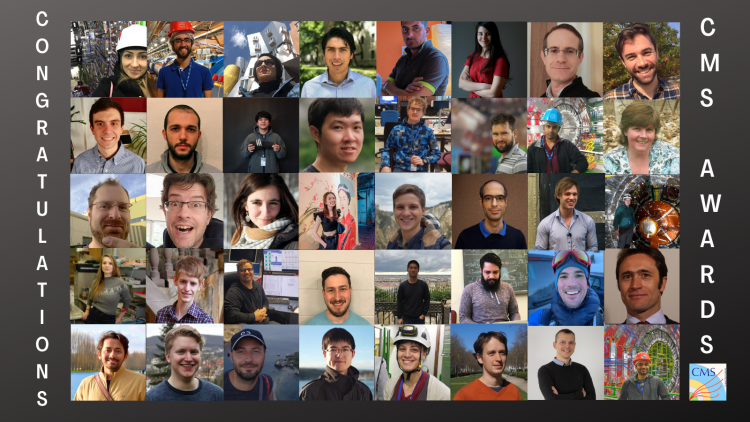 Some of the CMS Award Winners

Congratulations to CMS members who have received the CMS Award for 2020!

As is the tradition, every year during the February CMS week, members of the CMS collaboration are presented with awards for their incredible contributions and dedication to the CMS experiment.

This year's CMS Awards supersede the Detector and the Achievement awards that were awarded previously. The CMS Awards aim to recognize individuals who have made outstanding contributions to the strength of CMS and who have given or are currently giving substantial and excellent contributions to the project and construction of the CMS sub-detectors.

Fortyseven awards were given out this year; let's discover each awardee!

Chayanit Asawatangtrakuldee - For her leadership of and crucial contributions to the Physics Dataset and Monte Carlo Validation group, and in particular her invaluable impact on software release validation, data re-reconstruction and Monte Carlo production.

Georg Auzinger - For building and steering the collaboration for the BRIL Phase II Upgrade and in coordinating the rebuild effort for the BCM1F detector for Run 3.

Austin Baty - For his major developments in the heavy ions tracking reconstruction and research activity aiming to evolve the tracker raw storage scheme.

Francesco Bianchi - For his significant contributions to the thermal simulations for the Tracker upgrade.

Cristina Botta - For her outstanding contributions in developing and coordinating the physics trigger menu for the Level-1 Phase-2 Trigger Upgrade.

Isabelle De Bruyn - For her outstanding role in coordinating the commissioning activities of the CSC.

Stefano Caregari - For his excellent work on the HGCAL electronics development, including the design of DCDC ASICs and associated components.

Abraham Tishelman Charny - For outstanding contributions to the ECAL trigger group in preparation for LHC Run 3.

Patrick Connor - For his excellent work leading the large and complex alignment campaign of the tracker following the 2018 data taking and the alignment effort for the legacy reprocessing of the CMS Run 2 data.

Matteo Cremonesi - For his methodical approach and dedication to solving the problem of speeding up future HEP analyses, co-creating the Coffea analysis framework and exploring innovative infrastructures such as Apache Spark combined with the SWAN service.

Grace Cummings - For outstanding contributions to the assembly and testing of Next-Generation Clock and Control Modules for the Phase 1 upgrade of the HCAL Barrel and Endcap front-end electronics.

Mariarosaria D’Alfonso - For sustained contributions to a series of critical improvements in HCAL local reconstruction over many years,and for general leadership in HCAL detector performance.

Pieter David - For his excellent work as convener of the Strip Tracker Local Reco group for the past several years.

Frederic Dulucq - For his leadership and technical expertise in designing the readout ASIC for HGCAL, including prototype developments for the test beam program and the final ASIC, the HGROC.

Niels Dupont - For his outstanding work in the safety area of technical coordination during the past ten years.

Cathy Farrow - For her service and technical expertise in CMS detector construction, with particular dedication to the Pixel Luminosity Telescope assembly for both Run 2 and Run 3.

Jonathan Hollar - In his role as Deputy Project Manager he has followed the data-taking, the calibration, as well as the ongoing analyses with inexhaustible energy, competence, and tact.

Johny Alexander Jaramillo - For his contributions to a large range of software and hardware activities to the GE1/1 project. His work has been vital towards GE11 final tests, certification at the GEM lab in 904, and installation and pre-commissioning at P5.

Joscha Knolle - For his critical contributions to the Run 2 luminosity analysis and its publication.

Natalia Koss - For her essential contributions to the cooling, mechanical and module designs for the MTD Endcap Timing Layer.

Congqiao Li - For allowing the Legacy processing to benefit from the most recent framework developments in the area of parallelisation of event generators.

Kenneth Long - For his outstanding contributions to the MC generator group.

Inna Makarenko - For her crucial contributions to the Data Acquisition for the Outer Tracker, enabling critical tests for ASICs and hybrids.

Hualin Mei - For his impressive knowledge of hardware, software, electronics and performance analysis Hualin Mei gave important and significant contributions to CSC upgrade program and in chamber tests at GIF++.

Javier Fernandez Menedez - For his excellent leadership in the operation, maintenance and development of the CMS Data-Quality Monitoring system.

Marino Missiroli - For his exceptional contributions to the trigger in almost every single area: online operations, data quality monitoring, Run2/Run3 preparation, and the jet/MET effort for Phase-II.

Giovanni Mocellin - For many substantial and original contributions to the GE1/1 system, from simulation studies to chamber testing and characterization and commissioning at CERN. These achievements were instrumental to reach the GEM detectors required performance.

Atanu Modak - For his efforts that enabled significant improvements in the configuration time of the pixel detector.

Andrea Nürnberg - For his leading role in the activities for the Phase-2 outer tracker sensors over a number of years.

Minseok Oh - For his critical work in muon trigger development for the HLT Phase-II TDR and his outstanding contributions to the Run2 muon HLT over many years.

Martha Estefany Nunez Ornelas - For her outstanding contribution to the CSC LS2 testing of the post-refurbishment electronics  and of the new generation trigger mother board. Her contribution was crucial to avoid any delay in the CSC LS2 upgrade that was the main driver of the whole CMS LS2 schedule.

Shubham Pandey - For his key role in the HGCAL test beam program, including construction, operation, and data analyses to which he made major contributions.

Ioannis Papakrivopoulos - For his excellent development and integration work on the Detector Control System and the online web services.

Valerio Pettinacci - For his outstanding commitment and successful coordination of the design of the new ECAL enfourneur, the machine for the insertion and extraction of the ECAL supermodules in CMS.

Cristian Pena - For his critical and extensive work in developing and demonstrating the precision timing detector designs for both the barrel and endcap regions of MTD.

Huilin Qu - For deploying for production new tagger architectures as well as new inference engines, as well as important developments to speed up DeepTau inference.

Dylan Rankin - For his outstanding contribution to the development of the first hardware implementation of the particle-flow algorithm for the Level-1 Trigger Upgrade.

Vladimir Rekovic - For his excellent coordination, crucial contributions, and exceptional commitment to the offline software of the Level-1 Trigger Project.

Marco Rovere - For his leadership in the HGCAL DPG group and for major contributions to the clustering algorithms in the reconstruction software development.

Ivan Shvetsov - For his excellent work in Strip Tracker operations, including in his current role of StripTracker run coordinator.

Federico Siviero - For his critical work on the design and characterization of the silicon sensors for the MTD Endcap Timing Layer, which is guiding the final sensor design.

Andre Govinda Stahl - For his development work on the Online Monitoring System, in particular the accounting of data taking efficiency.

Inseok Yoon - For his intensive work to ensure Korean foil production and certification towards GE21, through the setup of a test facility in Korea for ageing studies and the crucial establishment of the certification process with all relevant tests.