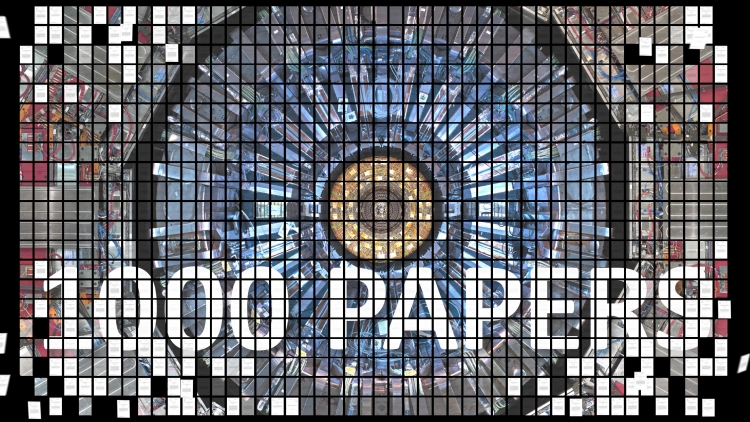 On Friday 19 June 2020, scientists at the CMS experiment at CERN's Large Hadron Collider submitted their 1,000th paper. This monumental achievement reflects an outstanding contribution to humanity's understanding of the universe — and it's just the beginning.

The discovery of the Higgs particle by the international CMS and ATLAS collaborations is the most famous achievement to date at the Large Hadron Collider at CERN. The scientists made the announcement on July 4, 2012, and it was later recognized with a Nobel Prize: The theoretical physicists who predicted the Higgs mechanism received the award in 2013.

The CMS detector is one of four large detectors situated around the 27-kilometre ring that is the LHC, accompanying the ATLAS, LHCb and ALICE detectors. Churning out raw data from a cavern located 100 meters below the French countryside, the CMS detector has produced enough data for its collaboration to typically publish more than 100 research papers per year.

In June 2020, CMS scientists celebrate releasing their 1,000th research paper. The famous paper on the discovery of the Higgs particle (already with 10,784 citations!)  is most impressively only the 183rd publication for the CMS collaboration.

A thousand different scientific results by one experiment is a truly exceptional achievement. For the last 10 years, CMS scientists have been producing, testing and publishing insights arising from the spectacular particle collisions at the Large Hadron Collider, describing fundamental aspects of the quantum universe in one paper after another. Peering into the behaviour of nature's most fundamental constituents through the lens of the humming, high-tech machine known as the CMS particle detector, the CMS collaboration has contributed immensely to the very foundations of knowledge in particle physics.

"A thousand of very high-quality scientific papers in a decade is an amazing result, a testimony of the rich physics spectrum provided by the LHC data, the versatility of our experiment and the ingenuity and dedication of our collaborators," said CMS collaboration spokesperson Roberto Carlin.  "We are very proud of our papers, and we look forward to the results we will produce in the coming decades. These will allow us to make further significant progress in the understanding of the universe."

The data taken by the CMS experiment allows physicists to conduct extremely diverse experiments, and ideas for new methods, searches and analyses are continuously being developed. The discovery of the Higgs particle was a major breakthrough but many mysteries still remain. The Standard Model, humanity’s current best theory to describe fundamental particles and forces, is not able to explain the biggest questions in physics:  Why is there more matter than antimatter in the universe? What is dark matter made of? Is there an underlying reason why gravity behaves so differently than other forces? Why do all particles have different masses and are they really grouped into three families? Is there more than one Higgs particle? Are there other new particles to be found? Or maybe even all particles come with a supersymmetric partner particle?

To answer these questions, the known particles and forces are studied in detail, checking predictions and measuring their characteristics more precisely than was previously thought possible. Searching for new particles and forces that attempt to answer these questions is only part of the strategy. The proton-proton collisions are in many cases compared to very precise predictions, trying to measure up the Standard Model and look for indirect evidence that it is not the complete picture. Occasionally, the collider goes through runs in which it sends beams of lead ions, instead of protons, into the heart of the CMS detector. About one in 10 of CMS's published papers involves heavy-ion collisions. Data gathered during these runs teaches us about what happens when matter is packed together at the highest densities.

“We are proud of reaching the unprecedented, historic landmark with the submission of CMS’s 1,000th paper for publication,” said Boaz Klima, CMS Publications Committee chair. He added that “the scientific impact of CMS publications has been at the highest level. Their quality, as well as the diversity of physics topics, is unparalleled.”

CMS is the first experiment in the history of high energy physics to reach this outstanding total of papers and with only a fraction of the data that the LHC anticipates to produce in its lifetime. The LHC accelerator at CERN will operate for another two decades.  The data is expected to increase drastically, by a factor 20, when the LHC transitions to a new phase called High-Luminosity LHC. All these new data will continue to be a source of creative new physics results. As CMS scientists, we look forward to continuing this quest for knowledge and to share our results with the scientific community and the world.

Adapted from our friends at Fermilab News