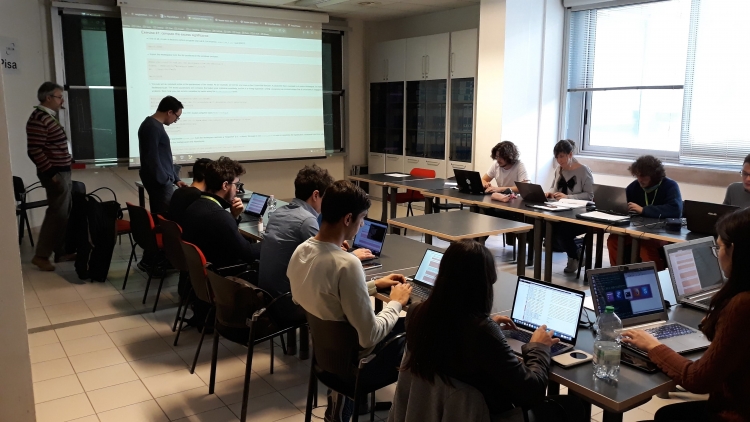 One of the parallel classes during the short exercises session. The students work hands-on on their laptops, while the facilitators explain the basics of data analysis.

This year, the CMS Data Analysis School (CMSDAS) celebrates a decade of hands-on trainings, exercises and challenges involving several hundreds of CMS members for the benefit of some 1500 students. Since 2010, the CMSDAS is designed to help CMS physicists from across the collaboration to learn, or to learn more, about CMS analysis.

But how did it all begin? We asked Ian Shipsey, central actor in the design and launch of the CMSDAS series. Ian, professor at Purdue University in Indiana, USA, worked within the CMS Collaboration until 2015 and contributed to many aspects of the experiment. “The idea for a CMS Data Analysis School came from two previous schools, CLEO101 (a hands-on total immersion software, analysis tool and data experience) and JTERM (developed for the CMS experiment at the LHC Physics Centre (LPC) at Fermilab),” says Ian. “Once the Large Hadron Collider (LHC) started taking data in 2009, it was urgent to have a hands-on training with data to meet the needs of the numerous new CMS members. By merging the CLEO101 immersion approach with the JTERM lectures, but also GRID and analysis tools tutorials, the CMSDAS was born. The promise was to enable a physicist new to CMS to run a complete analysis in less than one week, and, ultimately, to go beyond what had been achieved by the experiment. At the beginning, it is fair to say that there was a lot of skepticism, but this was dispelled when, at the first school in January 2010, a team of students facilitated by CMS conveners reconstructed the J/psi and found more candidates than an expert team had found at CERN the previous month.”

In 2011, Fermilab hosted its first CMSDAS; since then, a CMSDAS is organized at the LPC every January. In 2012, the CMSDAS became a “CMS wide school”: two or three editions are run in parallel in the US, in Europe and in Asia, facilitating the participation of students from different regions. That same year, the Italian National Institute for Nuclear Physics (INFN) organised the first European school in Pisa and the National Taiwan University (NTU) the first Asian school in Taipei.

The school consists of short exercises, an analysis challenge (long exercise), and a final contest, where the results of the long exercise are presented. During this final competition, all the teams present the outcome of their long exercise in a friendly and constructive atmosphere. By doing so, the participants gain some early experience in presenting results in front of both young and senior physicists. The large ratio (close to 1:5) between the number of facilitators and the number of students (mainly PhD students) is also an important aspect of the school; it plays a central role in the success of the CMSDAS.

“The CMSDAS has been my first introduction to CMS, back in 2012  when I was a student,” says Caterina Vernieri, who joined CMS from November 2011. “At first, joining such a big collaboration can be rather intimidating. Attending this week-long school was an invaluable help to get more familiar with my new experiment. I did not just get a comprehensive overview of the experiment software and physics analyses, I also – most importantly – met the experts and students who then became collaborators and friends. Afterwards, I decided to participate in some of the following CMSDAS editions as a facilitator. I wanted to welcome the new collaborators and to address the questions and concerns I once had when I first started.” Caterina now works at SLAC as a Panofsky fellow.

Caterina’s words underline another important aspect of the CMSDAS: during the school, strong contacts and ties are established among CMS members, who often become friends and privileged collaborators.

Last January, the 19th and 20th editions of the CMS Data Analysis School took place at Fermilab (Chicago, USA – 14-18.01.2019) and INFN (Pisa, Italy – 28.01-01.02.2019). About 85% of the students who were in Pisa considered their background in data analysis at CMS adequate for fully profiting from the school, and about 70% of them declared that the physics content of the long exercise was interesting and informative. Their opinion about the usefulness of the school was in general excellent. “The speakers were real experts in their fields. Their exercises showed how real data-analysis is run at CMS. The school has been really useful to bootstrap my analysis capabilities at the beginning of my PhD,” said a participant. “Really stimulating and challenging atmosphere. A beautiful experience, both for my work and for getting in touch with other young CMS people,” added another student.