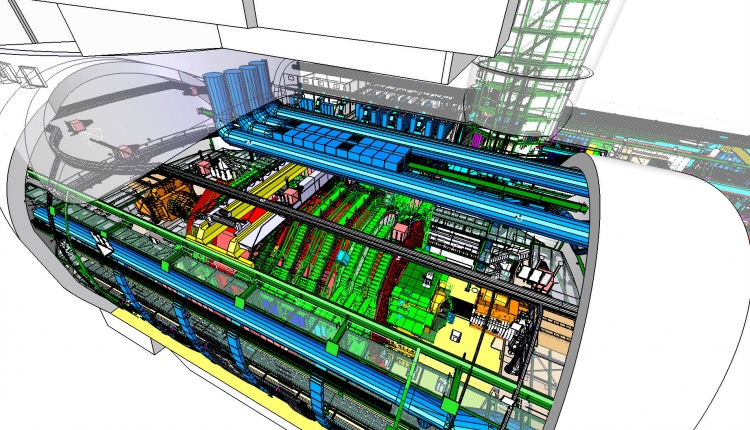 A successful four years of CMS detector operation came to an end last week and now we are beginning a new chapter. The next two-years of Long Shutdown (LS2) will mark an important transition for CMS.

Against a background of the intensive 5-yearly maintenance regime for detectors and ancillary equipment, which can only happen during Long Shutdowns, there will be work on the detector elements, supporting systems like the solenoid magnet, as well as the infrastructure of the site. The planned work divides loosely into two overlapping programs.

The first is the conclusion of the upgrade and consolidation work necessary for CMS to continue to perform well until the conclusion of LHC operation in its current configuration, with a remarkable performance outstripping the original design by a factor two. Tasks in this category include the conclusion of the first phase of the Pixel Tracker and Hadron Calorimeter (HCAL) upgrades, in the latter case a definitive modification to the photo-transducers and readout expected to be durable enough for the long-term.

The second program starts the process of equipping CMS to operate in the harsher environment of the High-Luminosity LHC, where the annual number of proton-proton collisions will match the total so far seen in all the years since LHC start and the number of collisions superimposed each time the counter-rotating proton bunches collide will increase by a factor 3-4.

This second phase of upgrades will require major changes or total replacement in all detector systems except the HCAL (i.e. Tracking, Calorimetry and Muon Detection, as well as Trigger and Data Acquisition). Starting now, this the preparation for the High-Luminosity LHC will make major progress during LS2, continue during the subsequent years of operation and end-of year stops and finally conclude in Long Shutdown 3 (LS3) which is planned to start in 2023 and will complete in 2026.

The LS2 key targets during the coming years are: to complete the majority of the endcap muon system upgrade and pre-install services for the remainder; to install a new beam-pipe, whose geometry is adapted to the new tracking system; to modify the powering system to ensure the longevity of the solenoid magnet; to install a completely new version of the data-acquisition system.

In the shadow of this list of “flagship” activities, but still absolutely key to the ultimate success of the High-Luminosity LHC upgrades, is a challenging program of infrastructure modification to both the underground and surface installations which will prepare the Point 5 site for detector assembly (or major refit), followed by installation and commissioning, corresponding to the complex set of comprehensive upgrades to be implemented during LS3, almost all of which have already been approved to proceed to final design.

From the point of view of the CMS detector, LS2 will be a superposition of equipping the detector for the last stage of the, so far highly successful, LHC data taking with the nominal LHC settings (Run 3, starting in spring 2021). At the same time the detector improvements are looking even further forward and are the start of the preparation for the upgrade to High-Luminosity LHC, with many new challenges and exciting opportunities.