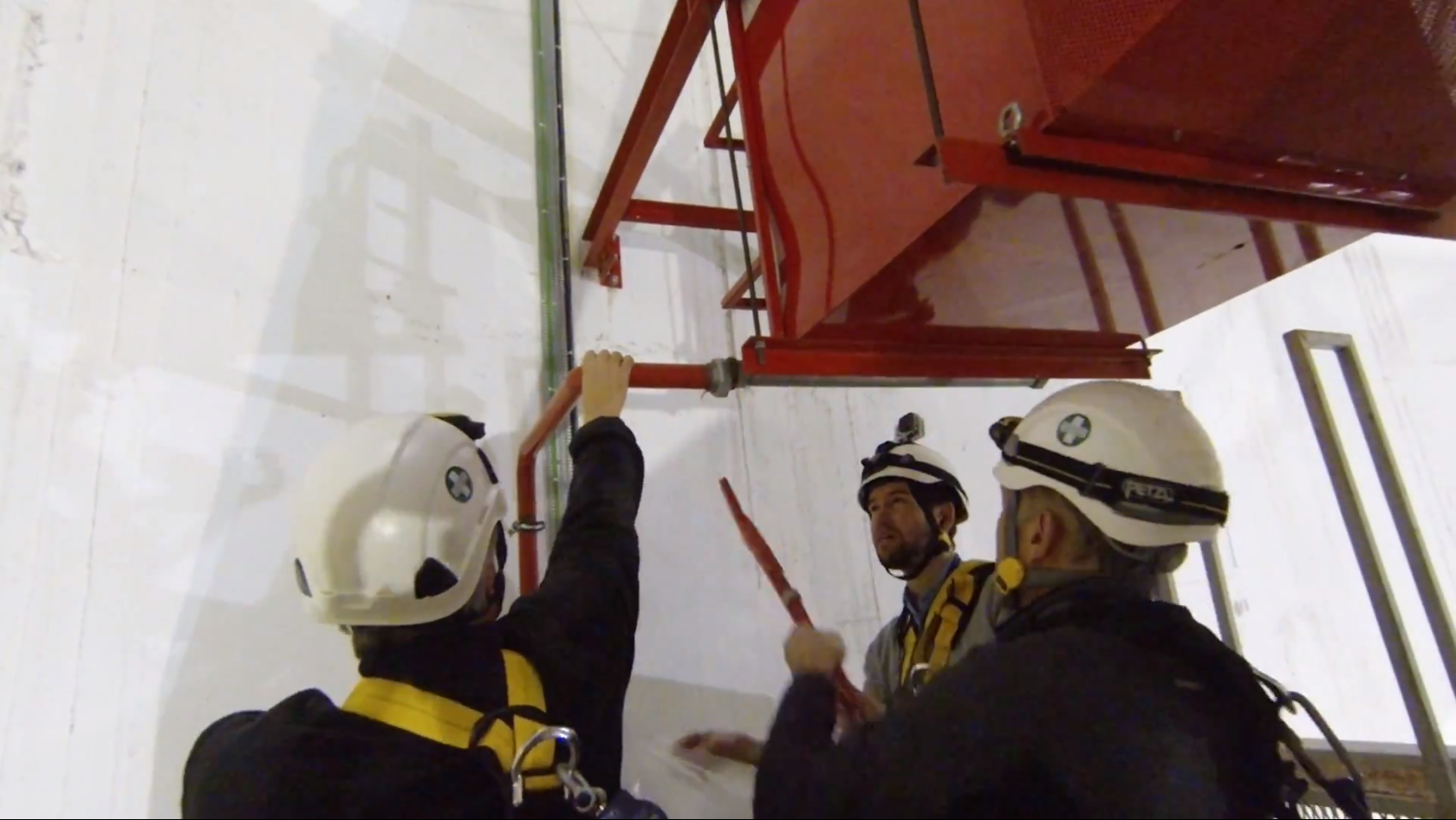 CMS has many different safety systems installed in the underground experimental area. These are designed to protect the detector and all the associated electronics as well as the cavern itself. In case of fire, the last line of defence is the High Expansion Foam System. Following the fire of 1999 in the Mont Blanc tunnel, CMS acknowledged that, as a similar deep-underground facility, it needed an extinguishing system that can be operated remotely, is completely passive (does not require pumps or electricity), can cope with a big fire in the cavern and, lastly, does not need the specialist intervention of fire fighters to be operated. The foam system was installed in 2006, with an Italian company called Kiddie Italia providing the components and ZEC, a Polish company, setting up the piping. The system is completely passive, relying on a 100 m water column between the surface reservoir and the underground cavern to provide the necessary pressure. In five minutes, 20 m3 of water mixes with foaming liquid to transform into 16,500 m3 of foam that fills the entire cavern. A test of the system was performed on 12 May 2006, before the detector components were lowered underground. After the maintenance contract with Kiddie Italia came to an end in 2011, the CMS and CERN Safety teams took charge of its upkeep, and the system was improved so that it could be maintained in-house. In May 2013, a test was conducted to measure the performance of every outlet: water was introduced through the 12 lines going to the foam blowers, which also served to clean the pipes. The pipes to the foam blowers were disconnected and reconnected to fire hoses in order to drain the water into the sump. Following this test, one of the outlets was removed from its location in November 2013 and brought to the surface in order to study it. This required members of the CMS Safety team to descend from the surface hall into the experimental cavern through the open 100-metre-deep shaft. Lowering people through the shaft is in itself was a rare exercise, and CMS Communications personnel were at hand to capture the experience on video (below).

With the help of this foam blower, the CMS Safety team will test different new foam agents that are now on the market. These tests will be performed with smoky air in order to be able to fill the cavern with foam even after the smoke layer has reached the height of the installed blower inside the UXC cavern. This will allow CMS to gain precious time for reflection before engaging the High Expansion Foam System, since, despite the usefulness of extinguishing an otherwise uncontrollable fire in the cavern, the foam will produce collateral damages. Following the tests, the foam blower will be reinstalled in the CMS underground experimental cavern before the LHC resumes collisions in 2015, ensuring the protection of the precious CMS detector.