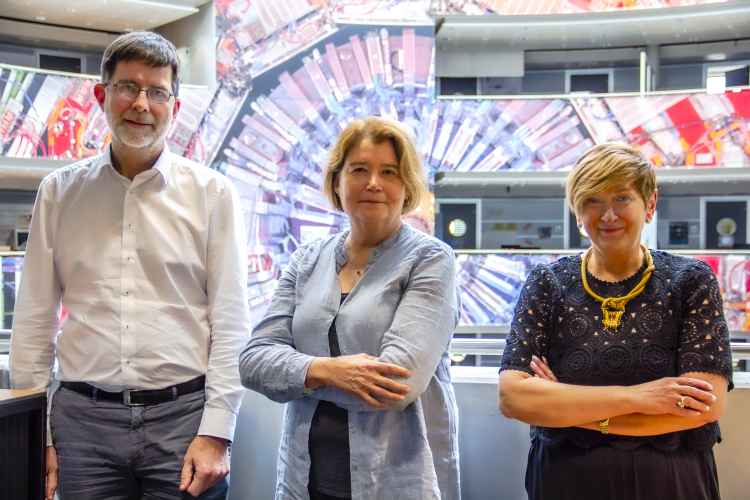 The CMS collaboration welcomes its ninth management team: the new spokesperson, Patricia McBride, and the two deputies, Wolfgang Adam and Lucia Silvestris, will represent the Collaboration for the next two years.

With more than 5000 scientists, engineers, technicians, administrators and students, CMS is one of the world’s largest scientific collaborations. From today, September 1st, until 31st August 2024, the important role of representing the CMS collaboration will be served by Patricia McBride, Wolfgang Adam and Lucia Silvestris, the ninth Spokesperson team of the CMS experiment since signing the letter of intent 30 years ago. After three years of Long Shutdown 2, the next two years will see the newly upgraded CMS detector collecting and selecting new physics data coming from collision events at the LHC at the highest energy of 13.6 TeV. With a precision and efficiency never achieved before, CMS is looking out for unexplored territories of particle physics. 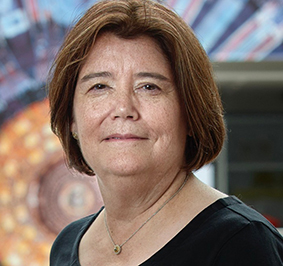 Patricia McBride (CMS Spokesperson 2022-20224) is a distinguished scientist at the Fermi National Accelerator Laboratory. She has been a member of CMS since 2005. During the startup of CMS, she served as deputy computing coordinator for five years. For the last four years, she was the head of the Fermilab Particle Physics division and previously she led Fermilab’s scientific-computing programme as deputy head of the Computing division during 2007–2011. She also served as the leader of the Fermilab CMS Center and managed the US CMS Operations Program. She received her PhD in physics from Yale University. She has served as chair of the Division of Particles and Fields of the American Physical Society (APS) and was a member of two of the APS committees. She was elected an APS Fellow and an AAAS Fellow in 2010. She has been involved in several international committees. Patricia has been CMS deputy Spokesperson from 2018 to 2020. 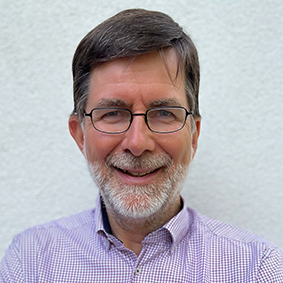 Wolfgang Adam (CMS Deputy Spokesperson 2022-2024) is a senior research associate at the Institute of High Energy Physics of the Austrian Academy of Sciences. After studying physics at TU Wien, he joined the DELPHI experiment at LEP in 1986. After responsibilities in the DELPHI’s forward tracking and, as a CERN fellow, the RICH system he became co-convenor of DELPHI physics groups in the area of searches for BSM physics and, eventually, the LEP Exotica working group. After the end of LEP data taking, he shifted his focus to CMS where he made contributions to the charged track reconstruction code, in particular for electrons. For more than 10 years, he was the group leader for CMS physics analysis at HEPHY-Vienna, with personal involvement mostly in BSM searches. Positions of responsibility in CMS included convernerships of the b-tagging group in 2009/2010, of the SUSY group in 2016/2018, and a term as physics co-coordinator from 2018 to 2020. He has also served on many review committees, boards and task forces, including the SUSY publication committee board and the task force for diversity and inclusion. 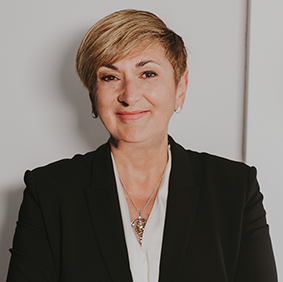 Lucia Silvestris (CMS Deputy Spokesperson 2022-2024) is a senior INFN staff researcher in Bari. Lucia began her research in the ALEPH Experiment, on the precision measurements of the W and Z boson mass and the determination of the number of light neutrinos’ families receiving her Ph.D. in 1990 from the University of Bari.  She joined the CMS Collaboration in 1995 in the Tracker Group, focusing on simulation, DAQ and test beam data-taking and analysis. In the last 20 years Lucia has been working on CMS Software, Trigger and Physics, covering several leading roles like Offline Coordinator, Deputy Upgrade Coordinator and Run Coordinator including Physics Performance & Dataset coordinator, at the time of the Higgs Boson discovery. Lucia has also served on many review committees, boards and INFN roles, like CMS Bari group leader and INFN-Bari principal investigator for the AIDA FP7 European and the ReCaS projects. In November 2020, she was elected representative of the CMS INFN collaboration. In this capacity, she represents the Italian members in the CMS experiment at LHC and she is involved in several INFN and CERN STEM outreach activities encouraging participation of young women in science.