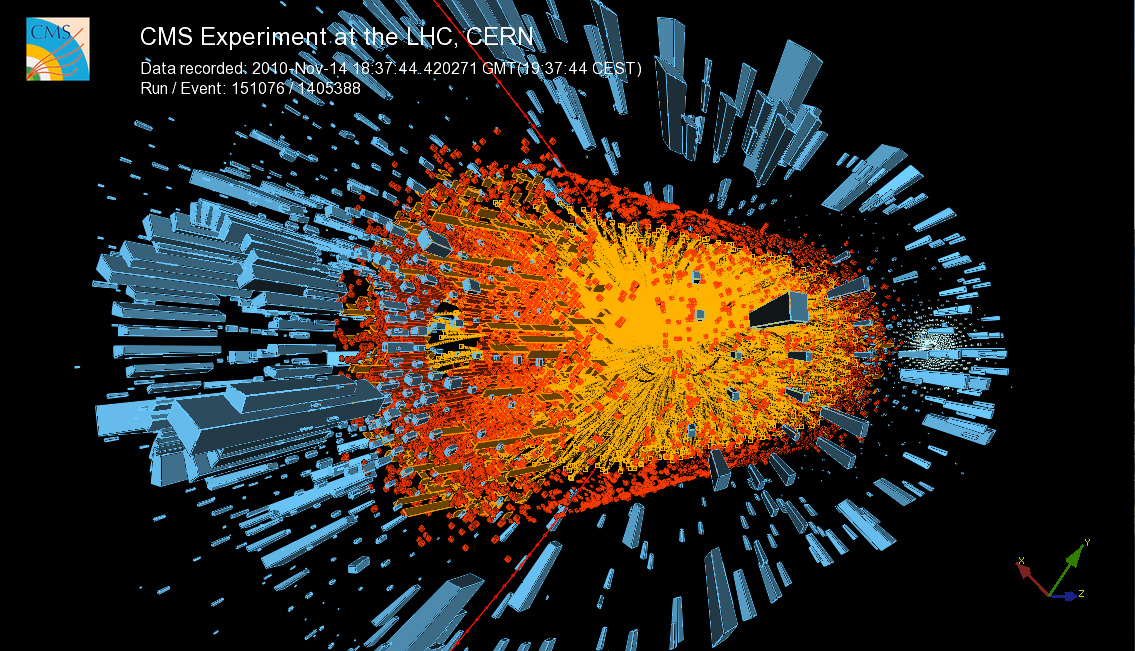 Candidate Upsilon decay to two muons observed in a lead-lead collision at the LHC. The two red lines (tracks) are the two muons, the mass of orange lines are tracks from other particles produced in the collision, whose energy is measured in the electromagnetic calorimeter (red cuboids) and the hadron calorimeter (blue cuboids).

In our Universe today, quarks are always bound together by gluons to form "composite" particles such as protons and neutrons. The Quark-Gluon Plasma, or QGP, often described as a soup-like medium, is a hot, dense state in which these quarks and gluons exist freely, unbound. This is thought to have been the situation a few millionths of a second after the Big Bang.

It is thought that this medium can be produced in collisions of heavy ions such as lead nuclei, which are collided by the LHC in addition to protons. If produced, QGP can appear in a variety of ways, and can affect particles produced in these highly energetic collisions. This is helpful, because while it isn’t possible to observe the QGP directly, its presence can be inferred based on the expected behaviour of particles that interact with it.

The Υ (Upsilon) particle, a quarkonium consisting of a bottom and an anti-bottom quark, exists in three states known as 1S, 2S and 3S, in decreasing order of how tightly the quarks are bound. (1S is the ground state of the Υ, while the others are excited states.) Because they are more loosely bound, the 2S and 3S states will melt more readily in the QGP. This means that the number of Υ(2S) and Υ(3S) particles produced relative to Υ(1S) in heavy-ion collisions should be less than corresponding numbers from proton collisions.

During the 2010 heavy-ion run at the LHC, lead nuclei were collided at a centre-of-mass energy per nucleon of 2.76 TeV. In the beginning of the 2011 run, protons were collided at this very same energy, allowing CMS to compare the Υ production rates from both these runs.

CMS studied pairs of muons that are part of the post-collision debris in the detector. Pairs of muons produced from the decay of particles such as the Υ will outnumber those pairs that are created by random processes. Thanks to the excellent momentum resolution of the CMS detector, a spectrum can be produced from the masses of each pair, with clear peaks corresponding to the masses of particles from which they decayed.

CMS observed a dramatic difference in the number of Υ(2S) and Υ(3S) produced in the heavy-ion and proton collisions, as expected in case their production is suppressed by the QGP. From the data collected from both 2.76 TeV runs, CMS has observed that the relative production of the excited states of the Υ particle in heavy-ion collisions is only about 30% that of the comparative rates from proton collisions (± about 20%).

The probability of obtaining the measured value, or lower, if the true double ratio is unity, has been calculated to be less than 1%. The collaboration is looking forward to the next PbPb run later this year when more data will allow study of the suppression of the excited Υ states with even higher statistics.