CMS tightens its net around muons 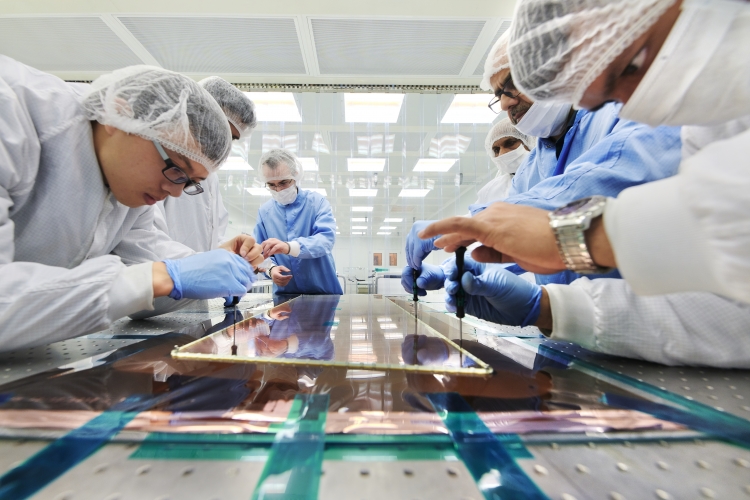 Assembly of the GEM detectors at CERN in clean room. (Image: CERN)

For the CMS experiment, Long Shutdown 2 (LS2) is like very prolonged open heart surgery. The main goal is to improve the detector’s performance, thanks to innovative, customised components.

In the outermost layer of the CMS detector, new instruments called GEM (gas electron multiplier) detectors will be installed in order to detect muons that scatter at an angle of around 10° in relation to the beam axis. Measuring muons so close to the beam axis is very challenging due to the high number of particles coming from collisions in that area. Muons at higher angles are already covered by different detector technologies in CMS.

GEM chambers comprise a thin, metal-clad polymer foil, which is chemically pierced with millions of holes, typically 50 to 100 per millimetre. Three of these foils combined with two electrodes make up a detector. When the muons pass through, the gas within the detector is ionised and releases electrons. These electrons drift towards the holes, where they cause an avalanche of electrons under a very strong electric field. “The electrons that we collect are not necessarily connected to the passage of a muon,” explains Michele Bianco, technical coordinator for the GEM detectors in the framework of the CMS upgrade project. “To make sure that we really are dealing with a muon, we have to locate its track in the other CMS subdetectors.” GEM detectors are, in a manner of speaking, like a piece of a puzzle. Without all the pieces, it’s impossible to know what the whole puzzle represents.

The GEM detector project for the CMS upgrade is the work of a collaboration of around 40 institutes, with by far the largest contribution coming from doctoral students and postdocs. Detector production sites located all over the world, namely in Belgium, Germany, India, Italy, Pakistan and the United States and at CERN, produced the 144 detector modules and their electronic components. Several training sessions for the external teams were held at CERN. “Kits” containing the individual pieces of the modules were then sent to the various institutes. Electronic boards, currently under production and testing at collaborating institutes, will soon arrive at CERN, where they will be integrated to the modules.

All the detectors have now been assembled and the team in charge of the project is working inside the CMS detector to prepare to install the chambers. “We need to install the chambers, but also the associated infrastructure, such as the gas, electricity and cooling distribution systems,” explains Michele Bianco. “We also plan to install the infrastructure required for the 288 future chambers that will be installed during the 2021-2022 technical stop. Then, during Long Shutdown 3 (between 2024 and 2026), 216 more modules will be added.”

Nearly 650 new detector modules will search for the muons that will be produced in CMS’s very forward region in the High-Luminosity LHC (HL-LHC) era. The “new” accelerator will produce between five and ten times more collisions than the LHC. We can expect a fruitful muon hunt.

This article was originally published on the CERN home page.