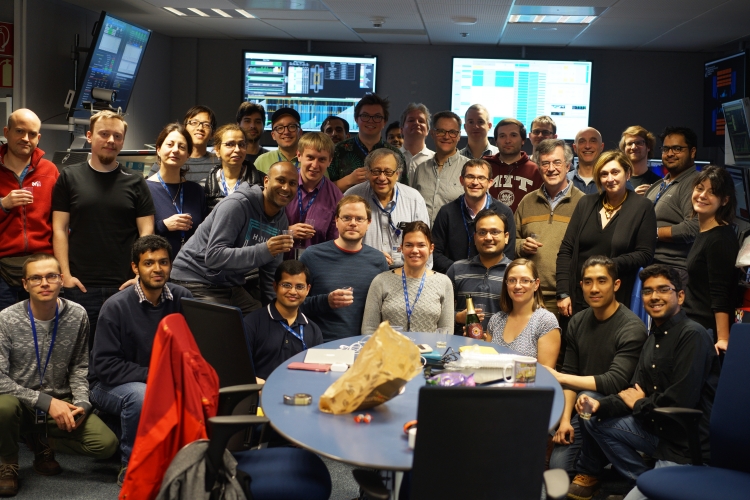 CMS collected more than 92% of the Run 2 data successfully yielding a total dataset of 150 fb-1. Looking back, 2018 was our most successful year to date, recording almost 95% of the LHC delivered luminosity.

This last year of Run 2 also had several special runs which took special planning and for which we ran special detector and trigger configurations. These include a Beta*=90m run joint with TOTEM,  a low-Pile Up run, and an intense period at the end of the year where we take Lead-Lead collisions. These runs all had different requirements on our detector and trigger/daq system and so early planning was crucial to ensure all these special runs were taken successfully.

During Run 2, CMS commissioned several important upgrades to the detector including a new Level 1 trigger, new readout for the hadronic calorimeter and a new pixel detector.

Figure 4:  The new Pixel Tracker being installed at the heart of the CMS detector - March 2017. (Photo: Max Brice/CERN)

The higher collision energies and the more than five times larger size of the datasets recorded in Run 2 were used to improve results and open new chapters throughout CMS’s physics program. At this time, the analysis of the first years of this data taking period have given rise to about 200 published results, with many more results still in preparation.

The mass range covered by direct searches for the production of heavy, new particles was substantially extended compared to the results obtained in Run 1. One example are searches for dijet and dilepton resonances that set limits on the masses of new W’ or Z’ gauge bosons in the 2-5 TeV range. Searches for the supersymmetric partners of gluons and quarks probe masses up to 2 TeV. Naturally, a central topic were the searches for dark matter that were performed in a multitude of topologies, including production in association with bosons or pairs of top or bottom quarks. The larger datasets, higher collision energy and higher mass reach have motivated development and application of new analysis techniques in order to reconstruct the decay products of highly boosted bosons or top quarks.

Our diverse search program was supported by an extensive set of precision standard model measurements. This included topics ranging from the production of top quarks, W/Z bosons, dibosons, and, tribosons including photons and the use of Higgs bosons (see Fig. 6). Recent highlights included the first observation of electroweak production of same-charge W boson pairs, first evidence for production of a top quark with a photon and detailed investigations of single top quark and top quark pair production as a function of the event characteristics that can be used to measure parameters of the standard model such as the top quark mass and the strong coupling constant.

The proton-proton program was complemented by a large number of results from p-Pb, Pb-Pb, and Xe-Xe ion collisions, allowing detailed studies of the properties of the hot and dense medium produced in these events. A couple of recent highlights include evidence for light-by-light scattering in Pb-Pb collisions and the first observation of top quark production in p-Pb collisions.

Most of the already published CMS results from Run 2 are based on data recorded in 2015 or 2016, while the total number of proton-proton collisions accumulated in Run 2 is more than three times higher, and the most important heavy-ion run of this period has just ended now. The large new dataset will be used to expand the direct searches for new physics, in particular for rare events with unusual signatures such as long-lived, heavy particles. The area of B physics will also profit from the large dataset when measuring rare B-meson decays and investigating hints for anomalies in the flavour sector. The properties of events with Higgs boson will be studied in more detail, and large progress is expected in the search for decays to second-generation fermions. Measurements of the production of top quarks and gauge bosons with the full dataset and using the most recent calibration and reconstruction procedures will allow for a verification of the predictions of the standard model at an unprecedented level of precision.

Figure 6: Summary of measurements of standard model cross sections in Run 1 and Run 2.

Many interesting physics results have already been published using the data collected in Run 2 and many more are still to come. The next two years will be a very busy time for the CMS collaboration. We will be analyzing the data collected over Run 2 data sample, improving the detector and software performance, and updating the infrastructure at the experiment. CMS scientists are looking forward to the next LHC running period that will start after the shutdown.