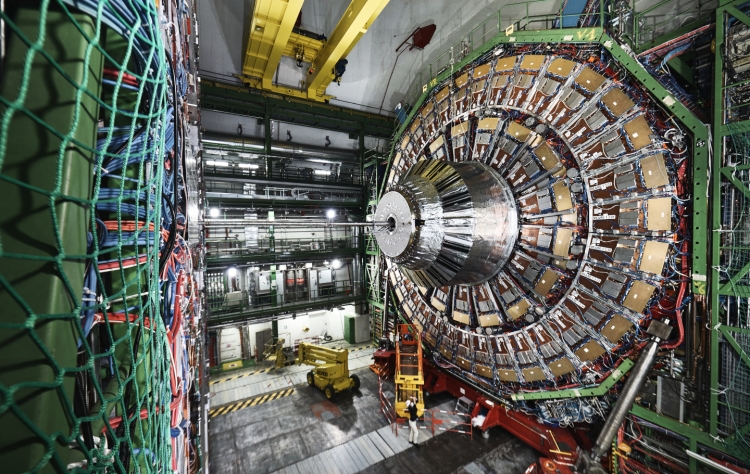 A few months are left before the start of Run 3 at CERN. With the timely completion of all upgrades planned for Long Shutdown 2 (LS2), in the last weeks the CMS detector has been set in its closed configuration. If this sounds like an ordinary or banal task, not even worthy of further investigation, knowing the behind the scenes is going to be really surprising.

The CMS detector is so compact (as the “C” of its name suggests) that, in order to make its innermost components accessible, it has been built in 15 different circular ‘slices’ that match perfectly one next to the other (like a loaf of bread). These slices, in the form of wheels or disks, can be moved back and forth, similar to how one would play an accordion. This tetris-like technology allows CMS scientists and technicians to reach the inner components that are normally hidden inside and contributes to making the CMS detector unique among the other big experiments at the Large Hadron Collider (LHC). 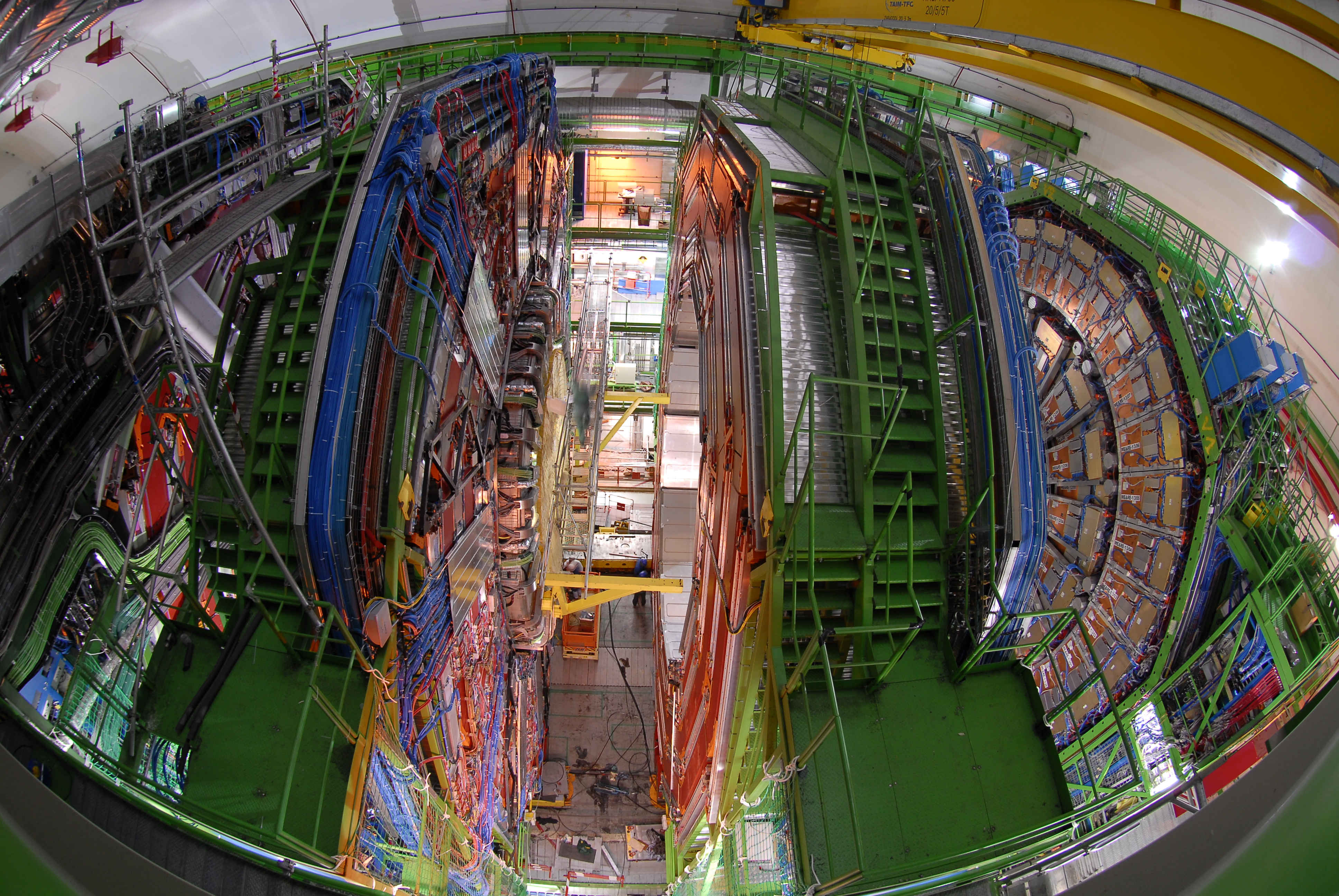 After spending most of the LS2 with some slices a few metres apart from one another, in the past weeks the far end disks, the End-Caps, have been moved towards the centre of the detector, making CMS compact once again. To give a hint of the complexity of the operations, one of the disks which have recently been moved is about 1400 tonnes, 15-metres-wide and located inside the CMS cavern, 100 metres underground.

The translational motion of each slice towards the centre of the detector makes use of twelve steel cables of about 15 millimetres diameter that pull the disk from the bottom. These cables are all guided by cylinders that ensure a uniformly distributed tension. Once the cables are in tension, before starting the movement, the disk has to be lifted.

Four orange air-pads, also called airtight “skirts”, each pressurised with air to between 25 and 35 standard atmosphere (about 25-35 bar), act essentially as Hovercraft. The compressed-air is pumped into circular discs under the feet of the End-Cap, causing the full slice to actually float about 5-10 millimetres off the floor, at which point its motion is essentially frictionless. 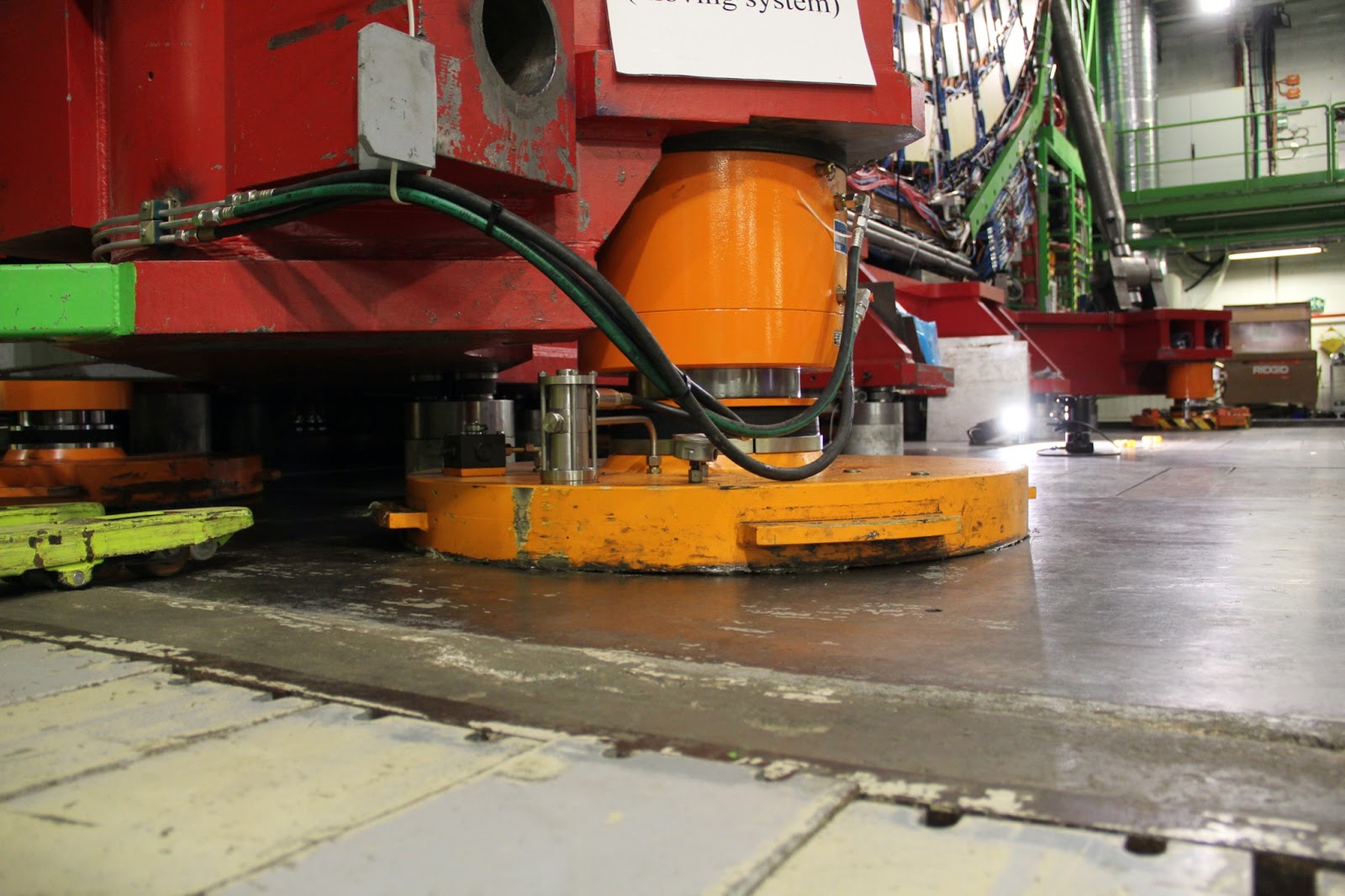 Once the cables are in tension and the airpads pressurised, the movement can begin. An additional hydraulic system operating at around 300 bar, integrated with the air-pads, corrects and controls the height of the lift and adjusts the disk inclination and roll. The overall systems allow for movement of CMS slices of around half a metre in 1 minute along guided rails on the floor.

If this did not sound tricky enough, the floor of the CMS experimental cavern is not perfectly level due to the 1.23% slope of the LHC tunnel matching stable rock strata. This means that unrestrained slices drift in the downhill direction, making for different traction forces and different restraints depending on which end of the detector is being moved and whether it is being opened or closed. This requires the heavy load to be held also by cables from the opposite side of where it is being pulled, for preventing uncontrolled floating. At the same time, these impressive operations of engineering need to be accomplished with high precision to properly align all the  different parts with each other and without touching the delicate beam pipe that passes through the centre of all CMS slices.

Another accomplishment achieved by the CMS collaboration. Next steps will be completing the commissioning of the CMS solenoid magnet system ready for long-term operation at 3.8 Tesla, planned in the following weeks.

Can’t just wait to see this incredible detector in action for the start of Run 3!