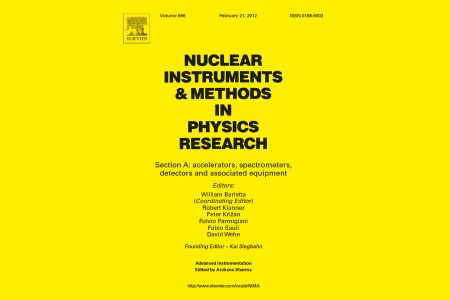 The cover of Nuclear Instruments and Methods, Section A (NIM-A) on Advanced Instrumentation

As high-energy particle physics pushes exploration at energy and luminosity frontiers, experiments are becoming increasingly complex – and this, in turn, drives the need for developments in particle detectors and their associated technologies. Experiments now depend on high-performance silicon and gaseous tracking detectors, electromagnetic and hadron calorimetry, transition radiation detectors and novel techniques for particle identification. Magnet systems have evolved with superconducting magnets featuring in present and future experiments. The alignment system, which is critical in optimising the overall performance of detectors, has become one of the essential design aspects of large experiments. Electronic developments are also important in enabling the exploitation of these detectors that are nowadays designed to operate in the hostile conditions of radiation and high luminosity. These subjects are the focus of a recently published topical issue of Nuclear Instruments and Methods, Section A (NIM-A) on Advanced Instrumentation.

This special volume begins with an introduction to multipurpose detectors that are used widely in high-energy physics experiments; a complete understanding of their principles and particle detection mechanisms can enable the prediction of the most desirable attributes of an ideal particle-detector design. A large bending power is mandatory for discovery physics, and the next chapter by Andrea Gaddi of CMS, describes the sequence of steps that lead to the design of a magnet system for modern HEP detectors, present and future.

Moving on to the detector technologies, Frank Hartmann of CMS explains about vertex-tracking detectors. Silicon tracking systems are a fundamental part of modern multipurpose high-energy physics experiments. Despite the vertexing and thus the heavy-quark tagging, silicon tracking detectors in combination with a strong B-field deliver the most accurate momentum measurement, and for a large range also the best energy measurement. In this paper, the functionality of pixel and strip sensors are introduced, and historical examples are given to highlight the varied implementations of the past three decades.

Electromagnetic calorimetry forms a key element of almost all current high-energy particle physics detectors and has widespread application in related experimental fields such as nuclear physics and astro-particle physics. The next review article by Dave Cockerill and Bob Brown of CMS introduces the basic concepts underlying electromagnetic calorimetry, and illustrates how these principles have been applied in recent and current detector designs, explaining the connection between technical choices and specific physics goals. The main emphasis is on the LHC experiments, which provide outstanding examples of the state-of-the-art. Selected examples from other domains, such as nuclear physics and neutrino experiments are also considered and particular attention is given to calorimeter design studies for the proposed International Linear Collider (ILC) where the concept of Particle Flow Analysis is being used as a guiding influence in the overall detector optimisation.

CMS physicist Nural Akchurin along with Richard Wigmans from Texas Tech University elucidate hadron calorimetry, a rapidly developing field in the past few decades. Currently, calorimeters with unprecedented complexity attest to the knowledge and experience that have been accumulated in high-energy physics. In this review, they touch on fundamental concepts, explaining new developments, applications in accelerator-based high-energy physics and the use of hadron calorimeters in other fields.

Johannes Wessels and Anton Andronic from ALICE, describe modern Transition Radiation Detectors (TRD) with various realisations of radiators as well as a discussion of the detection media. They cover most aspects of detector construction and assess different methods for efficient discrimination of particles predominantly focusing on the detectors currently operated at the LHC. They also describe some other TRDs, which are planned or are currently being operated in balloon or space-borne astro-particle physics experiments.

Christian Lippmann, also from ALICE, illuminates Particle IDentification (PID) which is fundamental to particle physics experiments. This chapter complements the previous one by reviewing PID strategies used by the large LHC experiments that provide outstanding examples of the state-of-the-art. In addition to selections of relevant examples from other experiments and short overviews on new developments, as the Alpha Magnetic Spectrometer experiment is also presented.

Next, the present state-of-the-art of muon detection systems using gaseous detectors at the Large Hadron Collider (LHC) is described. The section begins with a discussion of the concepts of muon detection systems, followed by a comparison of the various technologies used with respect to the challenges at present experiments; developments for future upgrades also are discussed. Starting from wire chambers, micropattern detectors are described and their readiness for upgrades is highlighted. Aging, long-term sustained operation and factors affecting gas choice are discussed. Finally some applications — such as those in medical imaging and astrophysics — are also presented.

With all detector sub-systems thus reviewed, Teresa Rodrigo of CMS and Jim Bensinger of ATLAS expose the necessity of and developments in alignment systems. Tracking systems in large multipurpose particle physics detectors comprise a large number of active elements, designed for precision measurement of particle trajectories. If detectors are to perform as designed a precise knowledge of the location of the different elements, with precision similar to the intrinsic detector resolution, is required. The authors describe the design criteria and design considerations for optical alignment systems that achieve these goals.

All review articles continue to be on the most downloaded list for the past few months and this, the Advanced Instrumentation issue, edited by Archana Sharma of CMS is available freely at Sciverse ScienceDirect:
www.sciencedirect.com/science/journal/01689002/666.