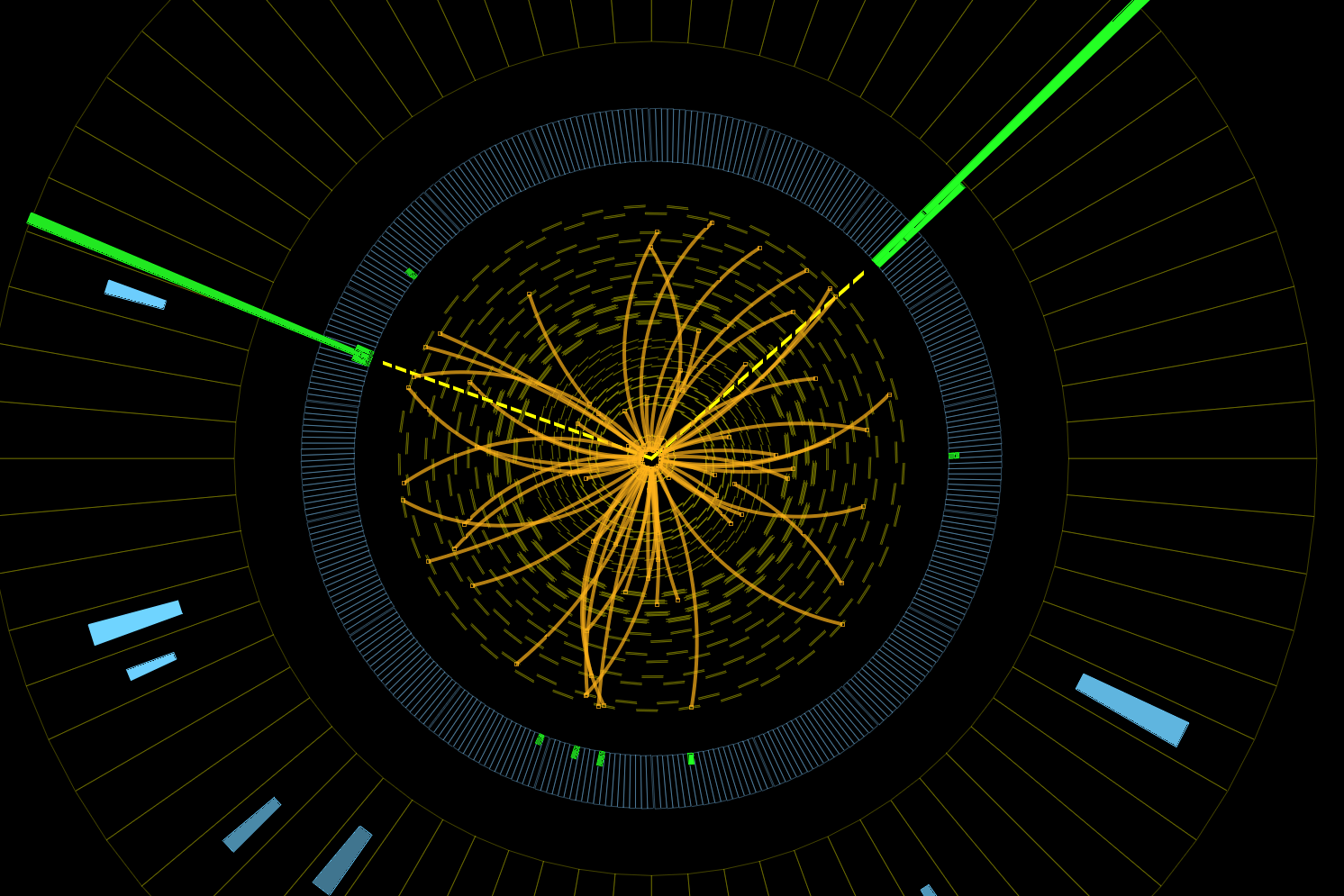 A candidate event for a Higgs boson decaying into two photons

At the Hadron Collider Physics (HCP) Symposium held in Kyoto, Japan on 12–16 November 2012, CMS presented many new results, including updates on the search for the Standard Model (SM) Higgs boson as well as Supersymmetry (SUSY). Several of these results use, in addition to the data collected in 2011, 12 fb−1 of data at a centre-of-mass energy of 8 TeV, collected in 2012 by the CMS detector up to only a few weeks before the conference.

Search for the SM Higgs

In July, CMS announced the observation of a new boson with a mass of around 125 GeV, consistent with the properties of the SM Higgs boson, with the full dataset of 2011 and around 5 fb−1 of data collected in 2012. Since then, the excellent performance of the LHC has provided CMS with even more collision events to sift through, and the newly discovered boson has continued to appear Standard-Model-like. At HCP, CMS has presented an update on the ZZ, WW, bb and tau-lepton (ττ) decay channels, as well as a combination of all five channels, including the di-photon (γγ) channel.

The combination [HIG12045] shows that the significance of the discovered boson is even more pronounced, at around 7σ (see Figure 1). This suggests that the probability of a false positive is only about one in a trillion. The mass of the new boson has been measured with an astounding precision of 0.5%, which is a great achievement for the CMS collaboration given how quickly this result has been obtained. All of the properties of the boson that can be tested with the current dataset show that they are consistent with the Standard Model (for example, Figure 2), but more data are needed before making a definitive statement. It is expected that additional data collected by the end of the ongoing proton run will help improve the accuracy of the measurements and understand better the couplings of the boson with the various particles making up the different search channels.

One particularly interesting measurement has been performed using the decay of the new particle into two Z bosons [HIG12041]. The ZZ channel is useful for probing further the properties of the discovered boson, and test its compatibility with the Standard Model. Testing two hypotheses on the particle’s spin and parity (think of it as “handedness”) revealed it to be of positive parity under the assumption of zero spin. This shows agreement with the Standard Model, and the data don’t favour the “pseudoscalar” hypothesis of zero spin and negative parity, as shown in Figure 3. In addition, the significance of the observation of the new boson in this channel is now 4.5σ.

Further results were shown for the WW channel [HIG12042], with the W bosons decaying into either an electron or a muon, accompanied by a neutrino. The escaping neutrino is the reason that the Higgs mass cannot be precisely reconstructed in this channel, and instead a broad excess is expected above the background. The additional data have led to an increase in the supposed signal in this channel — as expected for a real signal — which is now over 3σ in strength. Similarly, the final states of Higgs decays to into τ-lepton pairs and b-quark pairs are expected to lead to broad enhancements over background expectations. Both these channels are extremely interesting as they allow a direct observation of Higgs decays into fermions. The updated results in the ττ channel [HIG12043] show a very mild enhancement over background, consistent with a signal, but not yet statistically very significant. The updated bb channel [HIG12044] shows that an excess of just over 2σ seems to be building up in the data. Both these fermion channels are at this point consistent with the presence of a Higgs boson in the data, but firm evidence requires more data.

SUSY offers elegant solutions to long-standing problems in physics — for example the lightest supersymmetric particle (LSP) is a candidate dark-matter particle — but does so at the cost of doubling the number of types of particles in the Universe. To test the validity of this theory, we must observe supersymmetric particles, called sparticles. It is hoped that these sparticles will be produced in collisions at the LHC and that CMS can detect them before they swiftly decay into other, well-known particles.

CMS is actively searching for stops [SUS12023, SUS11030, SUS12028, SUS12026, and SUS12029] and sbottoms [SUS12028 and SUS12029] (the SUSY partners of the top and bottom quarks), as well as partners of the Higgs, W, Z and the photon [SUS12022]. In addition to these direct searches, CMS is exploring the possibility that SUSY could manifest in a variety of more general scenarios, such as those models in which the conservation of an additional quantum number — called R-parity — is violated [SUS12027] and where none of the SUSY particles are stable. Such models do not provide a dark-matter candidate, but they could be discernible in CMS data with striking signatures.

All search results presented at HCP are consistent with Standard Model backgrounds. Several of them are the first results of their kind from CMS, while others increased the mass reach significantly over previously published results from the LHC.

Searches for stops and sbottoms include the first search for direct production of pairs of stops at energies of 8 TeV. This search used a signature that provided first sensitivity to the case where stops decay either to top-neutralino or bottom-chargino. In both cases the decay products can lead to a signature of a lepton, jets — including two b-quark jets — and large missing energy due to the undetectable particles. The data are found to be in agreement with the predicted SM backgrounds, which are dominated by the production of top-quark pairs. Exclusion limits in the stop-neutralino mass plane are shown in Figure 4. Searches for stops in the R-parity violating SUSY scenario also showed good agreement between data and SM backgrounds, and stop masses up to 1 TeV are excluded in this scenario for the first time. CMS also looked for the production of pairs of sbottoms, each of which decays into a bottom quark and a neutralino. In the absence of deviations from the SM expectations, CMS placed its strongest exclusion limits so far in the sbottom-neutralino mass plane, shown in Figure 5.

CMS also performed a variety of searches for the production of pairs of weakly interacting sparticles, such as neutralinos. These searches covered significant new regions of parameter space, as can be seen in Figure 6, which shows the upper limit of the production rates as a function of mass. The higher energies in 2012 as well as the doubling of the collected data have a particularly large impact on the electroweak production search, where the mass reach has been extended by up to a factor of two compared to previously published results.

— Submitted by Achintya Rao, with contributions from Andrey Korytov, Albert De Roeck and Ivica Puljak for the CMS Higgs group, and Eva Halkiadakis, David Stuart and Frank Wuerthwein for the CMS SUSY group.