How does CMS measure Luminosity? 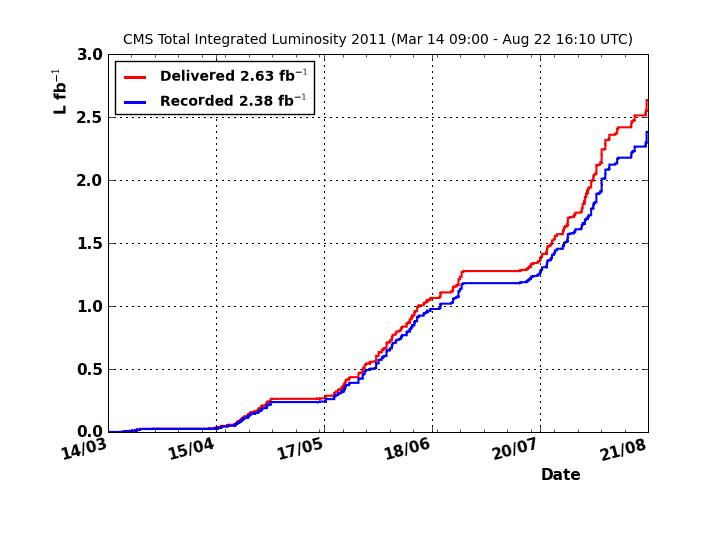 The number of events that an experiment observes is proportional to a quantity called the luminosity — a measure of how many collisions are occurring in the detector. An accelerator operating at high luminosity stands the best chance of producing the very rare events that are of the greatest interest for physicists — e.g., the Higgs boson, supersymmetric particles, microscopic black holes, etc. Moreover, even for final states that occur more frequently, higher luminosity means larger samples and better statistical accuracy, which allow one to make more precise measurements. For these reasons, luminosity stands alongside energy as one of the two the most important performance parameters of an accelerator.

In CMS, the luminosity is measured using signals from the Hadronic Forward (HF) calorimeters. The luminosity system taps in to these signals as they come off the detector and routes them to special electronics that collect data at a very high rate. This rapid data-collection allows the system to determine the luminosity being delivered to CMS every few seconds with a statistical accuracy that is better than 1%. The LHC accelerator team uses this feedback to maximise the luminosity being delivered to CMS and to optimise the overall performance of the machine. Luminosity information is also stored in a database for subsequent use in offline data analysis.

CMS keeps track of both “delivered” and “recorded” luminosity. Delivered luminosity refers to the luminosity delivered to CMS by the LHC. Ideally, the amount of luminosity recorded should be the same as the amount delivered, but in some cases the CMS detector is unable to take data, either because its data acquisition chain is busy or because one or more of its detector subsystems is temporarily unavailable. The recorded luminosity includes only the luminosity actually logged by CMS.

A major challenge associated with the luminosity measurements at the LHC is the determination of the absolute calibration scale. Although some “standard candle” reactions exist and will ultimately prove useful in setting and/or confirming the absolute calibration for the luminosity determination, they involve sophisticated analyses that require time. Working closely with the LHC and colleagues from the other experiments, CMS has conducted a series of Van der Meer scans that are used to determine the calibration in a simple way. The Van der Meer technique, pioneered by its namesake at CERN’s Intersecting Storage Ring accelerator in the 1960s, involves scanning the LHC beams through one another to determine the size of the beams at their point of collision. These measurements, when combined with information on the number of circulating protons, allows the determination of an absolute luminosity scale, which in turn is used to calibrate the HF luminometer.