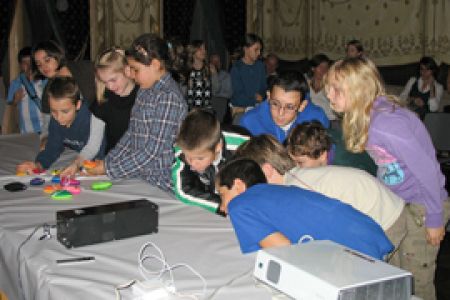 The 10- and 11-year-old children of Geneva town hall employees were allowed to skip classes on 10th November to participate in the nation-wide “Futur en Tous Genres” day and find out about different career prospects.

During an informative morning, the kids were literally sent to “follow their parents’ footsteps” on the job and, at noon, attended a lunch reception at the Palays Eynard hosted by Geneva’s mayor Pierre Maudet. Later, they had the unusual opportunity to meet a gentleman who works as a midwife at the Hôpital Cantonal. As a representative of CERN, I had the privilege of speaking to the children about how particle physicists are curious about LEGO blocks — just much tinier ones than those the kids get to play with!

A brief presentation gave them a simple overview of what we do at CERN, and when they saw an animation featuring two unusual creatures emerging from a high-energy collision, they were fascinated but quite puzzled for a moment! But several of them recognized without hesitation the formula E=mc2 that popped up to explain what had just happened. Even dark matter, as an invisible glue that keeps stars on the carousel of their galaxy, came to sound quite plausible, especially when they were handed a black, furry dark matter plush toy! A small cosmic ray detector (made at Notre Dame University in the USA) gave them the ultimate thrill: the possibility to see — with a bit of patience — traces left by muons in real time. And while they agreed a magnifying glass is fine to observe an ant, they understood that, to see the tiniest of Nature’s building blocks, one needs a microscope as huge as CMS.

The children had an excellent time and, who knows, one day some of them may make their way to CERN as physicists!