Planning for years of luminosity measurements with BRIL 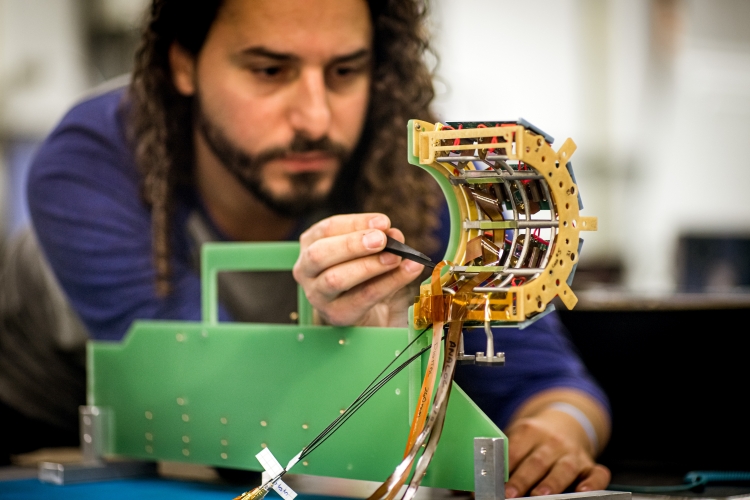 Andres Delannoy is shown working on one of the four cassettes of the Pixel Luminosity Telescope (PLT), one of the luminometers that the BRIL project is rebuilding in preparation for Run 3 along with the Fast Beam Conditions Monitor (BCM1F).

When the LHC is sending billions of protons at each other millions of times per second, it’s important to know just how many of them actually are colliding, both so that the LHC can optimize its operations to produce the most collisions possible, and as an important input to nearly any measurement that will be performed on the resulting data. This measurement is called “luminosity”, and at CMS, the Beam Radiation, Instrumentation, and Luminosity (BRIL) group is tasked with this vital responsibility. BRIL operates a number of detectors for measuring the luminosity and monitoring beam conditions. Having multiple detectors provides redundancy in case of problems with one, as well as a way to measure how their behaviour changes in different LHC beam conditions.

These detectors are expected to play an important role in the upcoming Run 3 of the LHC, planned for May 2021. “Precision luminosity and beam-induced background measurements will be important for the future operation of the CMS detector,” says Anne Dabrowski, one of the leaders of the BRIL project, “since the luminosity is part of nearly every physics measurement at CMS.” Like much of the rest of CMS, the BRIL group is using the LHC maintenance break, called Long Shutdown 2, to replace and upgrade parts of its detector systems.

One system that is seeing a significant overhaul is the Pixel Luminosity Telescope (PLT). Installed at the beginning of 2015 for Run 2 of the LHC, the PLT provided fast, high-precision luminosity measurements during Run 2. However, the high-radiation environment around the PLT meant that, over time, the crystal structure of its silicon sensors was damaged, resulting in decreased efficiency. As a result, the PLT is being entirely rebuilt with new components to be ready for the start of Run 3. In fact, the plan is to build two complete copies: “If the new PLT deteriorates faster than we anticipated, we can replace it very easily since we have a second copy” says Andrés Delannoy, who is overseeing the PLT replacement. Two of the four quadrants of the first new PLT have already been constructed, with the next two anticipated in the upcoming months.

The Fast Beam Conditions Monitor (BCM1F) is another system that will see a significant overhaul. Until now, BCM1F used a mix of diamond and silicon sensors; since the silicon sensors performed generally better, the upgrade of BCM1F will use all silicon sensors with a brand-new active cooling system to ensure improved protection against radiation damage. The sensors used are part of the batch that is currently being produced for the upgrade of CMS for the High-Luminosity LHC. “This is the first time that this kind of silicon sensor will be installed in CMS, so the whole community is eager to see how this material behaves,” says Dabrowski. The BCM1F layout has also been redesigned: “The new production is ready and is showing extremely promising performance in initial testing” says Georg Auzinger, one of the leaders of the BMC1F replacement project. Once the sensors have been thoroughly tested, the final assembly is expected to take place in mid-2020, and then the final installation on the PLT structure will be performed in preparation for installation into CMS.

With these upgrades (among others), BRIL plans to be well prepared for the beginning of Run 3 in 2021 and looks forward to many more years of luminosity measurements!