Preparations for an upgrade of the heart of CMS 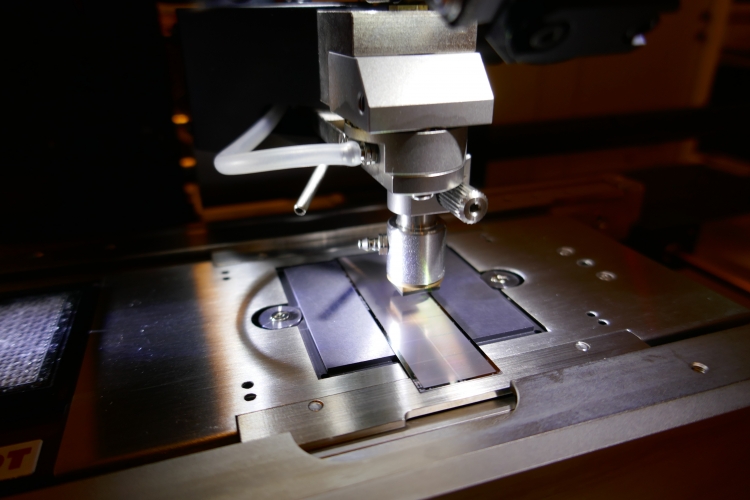 Testing of pixel modules in a clean room at the Helsinki Institute of Physics.

The CMS detector is going through multiple maintenance works during the LHC Long Shutdown 2 (LS2), the first year of which is approaching its end. The beginning of 2019 saw the CMS Tracker Pixel detector extraction that is now stored in a clean room on the surface and it will be installed back inside the heart of the CMS detector at the end of LS2.

The CMS pixel detector is the closest to the interaction point and therefore the one that suffers most from radiation damage. In order to keep the excellent tracking performance and high quality data for physics analyses in the next period of data taking, the innermost layer of this sub-detector will be replaced with a new one. This is also an excellent opportunity to improve some of its current designs.

Testing of pixel modules in a clean room at the Helsinki Institute of Physics. A module consists of a silicon sensor in which particle signals are initiated, sandwiched between a readout chip and a circuit board in which the TBM is integrated.

One of the essential parts of the pixel detector is a chip called a token bit manager (TBM), which orders and communicates the hits that are read out from an active pixel region. At the LHC we have a rate of up to 600 million charged particles per cm2 per second, so it is not possible to send every hit out of the pixel detector. In the harsh radiation environment close to the LHC beam pipe, the current TBM would occasionally have a false signal in its electronics that could not easily be recovered. Among other things, the problematic region in the chip was redesigned by the developers at Rutgers University to be more robust against this kind of false signal and an easy reset of the chip has been implemented.

At this moment, all components for the new layer are being produced, assembled, and tested. The new TBMs are tested by experts in Kansas, New Jersey, Zagreb, Zürich, Vienna, Tennessee, and Florida, and are subsequently sent to the Paul-Scherrer Institute in Zürich, Switzerland for integration into the circuit board. The readout chips, also originating from Switzerland, are connected to silicon sensors by a company in Finland and then tested by the Helsinki Institute of Physics. Both sensor and readout chip are then sent back to Zürich, where they are connected with the circuit board. A truly global endeavor! ”When I found out I had an opportunity to help with some research over the summer, I had no idea it would end up testing equipment for LHC. I was truly a great experience to know I played a part in this experiment” said Jake McCrary, undergraduate student, who tested TBM chips at Kansas State University.

Each production step needs to be performed in a clean environment with enormous precision; with such fragile components, any mistake can result in a non-functioning module. In the current production a good readout of more than 99% of the pixels could be achieved so far, which is a promising start of the path towards installation of the new layer in CMS together with the rest of the pixel detector next fall! ”We are looking forward to the new and improved pixel detector. We expect nothing less than the best physics data ever collected.” says Jory Sonneveld, one of the pixel experts.