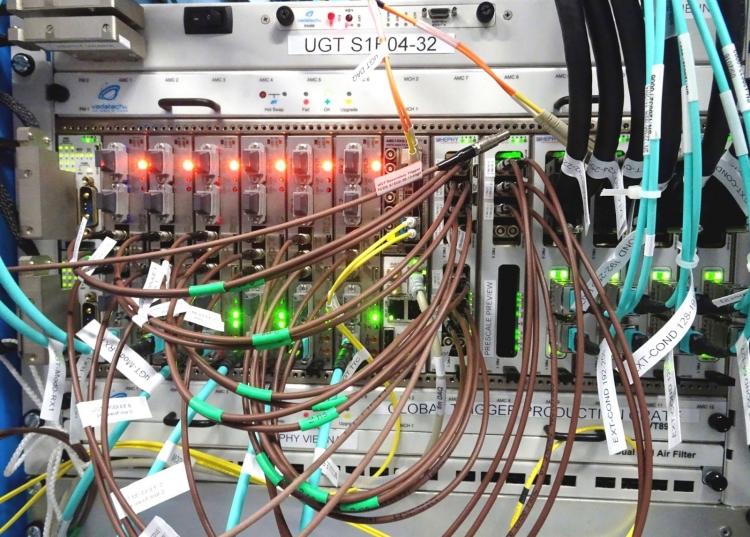 The CMS Phase-1 Level-1 Trigger system. The Global Trigger is responsible for taking the final decision to keep the collision event or not based on physics criteria . Credits: Manfred Jeitler

The challenge of Run3: CMS is preparing to resume its operations for the Run-3 of the Large Hadron Collider (LHC) after a 3-year long shutdown called LS2 (2019-2021). The time of LS2 was used to perform upgrades, which are regularly conducted in the lifetime of a particle physics detector to maintain its performance or in many cases improve them. When the LHC returns in action in the spring of 2022, the energy released in the collisions will be increased (center-of-mass energy) from 13 TeV to 13.6 TeV along with the rate at which particles are brought together to collide (instantaneous luminosity) of 2 x 1034 cm−2s−1. When bunches of protons cross into the heart of the CMS detector, an average of 50 collisions of protons are taking place, flooding the detection layers. Operating the CMS Trigger System in such a harsh environment constitutes a serious challenge. During LS2, the system has been adapted to integrate the inputs coming from the calorimeters and the new muon spectrometers in the forward region of CMS detector, such as Gas Electron Multiplier (GEM) and improved information from the existing CSC muon detection chambers.

The need for triggering: Among the hundreds of millions of collisions produced by the LHC each second, only a handful of them contain potentially interesting physics, and therefore need to be scrutinized. The trigger system is responsible for performing such a precise selection based on physics motivations. The large amount of data produced by the detector per second represents multiple terabytes (Tb) of information, which cannot be recorded on tape nor inspected with computers. Therefore this selection at the input rate of 40 MHz may only be performed by a dedicated custom-designed electronics system called the Level-1 Trigger (L1T) reducing this rate down to 100 kHz. The L1T system is designed to harvest the information from the CMS calorimeters and the muon spectrometers, it is a fully synchronized system delivering its decision 3.8 μs after the particle collision has occurred at the center of CMS. A second stage of fine selection is performed by a software trigger called the High-Level Trigger (HLT), implementing a farm of 30 000 cores.

A smarter Level-1 trigger system: Hunting for rare signals such as the Higgs boson decaying into tau leptons is a particularly difficult task. To allow experiments to perform these searches, the LHC has increased its center of mass energy and its instantaneous luminosity across the past years. To remain performant with these intense conditions, major technical improvements were introduced to the L1 trigger during its Phase-1 upgrade in 2016, including an innovative architecture called time-multiplexing. With this configuration, the data related to a given event is sent to a specific processor, while the following event is sent to another one, in a daisy chain kind of way. The input data processing is subdivided by timing allowing for more time to be spent on reconstructing triggerable objects, such as electrons, tau leptons or global quantities used in the event selection. An important aspect of this upgrade revolved around the design of advanced electronics boards equipped with modern Field-Programmable Gate Arrays (FPGA) allowing reconfigurable and highly sophisticated algorithms to be implemented. High-bandwidth optical data communication links also allow the system to be highly reconfigurable to accommodate future detector and electronic upgrades to the CMS experiment. These technological choices led to a higher level of modularity and flexibility that have set a new scale of standardization for many future trigger upgrades in the field. The Run-2 was completed in 2018 with an unprecedented amount of data recorded by the CMS L1 trigger and successfully analyzed to result in major observations, such as the Higgs boson decaying into tau leptons or b-quarks and its production mode associated with top quarks. These results bring us one step closer to a better understanding of the Higgs sector and in particular its coupling to fermions. The performance of the CMS L1T during Run-2 has been published in 2020.

Muons with unconventional signatures, a sign of new physics to trigger upon. Following the Phase-1 upgrade of the L1T system, more powerful boards and optical interconnection provide today the needed flexibility and modularity to expand the physics reach of the experiment during Run-3. Additional measurements from GEM, combined with the CSC chambers will help improve the muon track reconstruction in this difficult region of the detector where the bending of the track is less pronounced. The muon track reconstruction algorithms have been improved to achieve higher trigger efficiency, to reduce the impact of pile-up and to provide means of selecting displaced objects for the first time. These displaced objects are falling into a completely new category of physics signatures originating from beyond Standard Model processes, referred to as Long Lived Particles (LLP). Depending on the region, these algorithms use either a Kalman Filter-based approach or machine learning techniques with the implementation of a Deep Neural Network in the core of the hardware system. The L1 trigger has now extended capabilities to efficiently select these unconventional signatures and explore new territories already during Run-3.

Redefining the future of triggering with hardware systems. The Long-Shutdown 2 was the perfect time to think of the future and design the L1T Trigger upgrade system for Phase-2. Starting 2027, the LHC will become the High-Luminosity LHC (HL-LHC) and will operate with an instantaneous luminosity seven times higher than the design parameter of the collider leading to an inconceivable average of 200 simultaneous collisions per bunch crossing. The HL-LHC offers an unprecedented opportunity to achieve scientific progress but requires the implementation of a sophisticated L1T system also capable of providing means of selecting collision events from beyond Standard Model processes. For the first time, both tracking and highly granular information from the calorimeters and from the muon systems can be exploited at L1. The L1T key feature is the implementation of a Correlator Trigger designed to run a particle-flow algorithm used to reconstruct and identify precisely the particle event content. The trigger algorithms enter a new era of sophistication with the use of machine learning approaches or unsupervised learning techniques, such as the autoencoder that was successfully implemented in an FPGA for the first time. The L1T system architecture has been designed to process efficiently the 63 Tb/s input bandwidth (compared to 2 Tb/s in Phase-1) relying on state-of-the-art FPGAs (with 8 times more resources than today) and high-speed optical links reaching up to 28 Gb/s (compared to 10 Gb/s in Phase-1). Directly inspired by the current system, the data processing is carried out by more than 250 generic-processing cards based on Advanced Telecommunications Computing Architecture (ATCA) technology. The Phase-2 Upgrade Level-1 Trigger project is described in a Technical Design Report . The project was reviewed and approved recently by the LHC committee (LHCC) and has now entered its construction phase. Intensive demonstration tests in various centers around the world have begun and a larger-scale integration of the system at CERN is on its way. Once installed in the service cavern during the Long Shutdown 3 in 2025, this system will offer extraordinary ways to select interesting physics and expect the unknown. 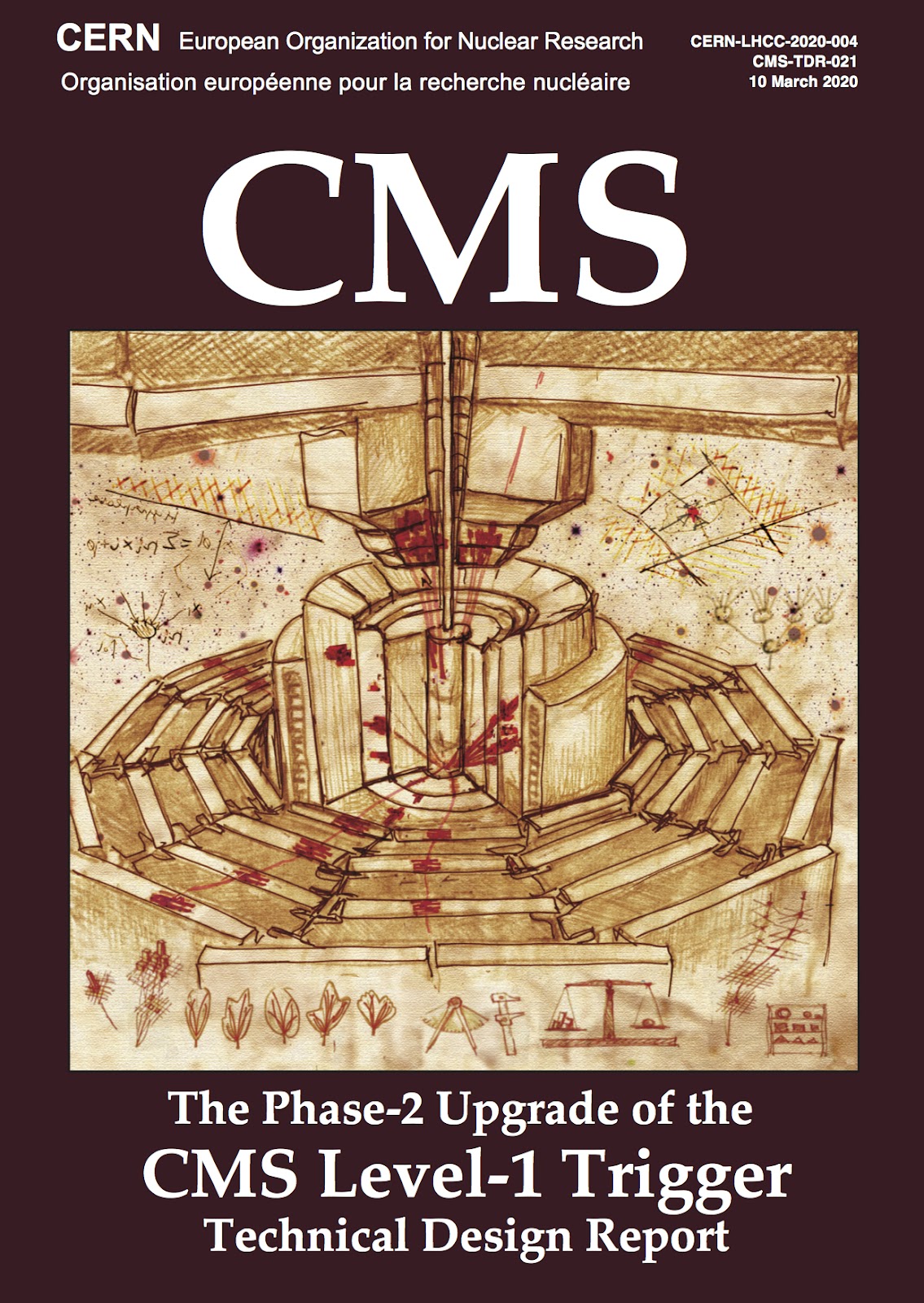