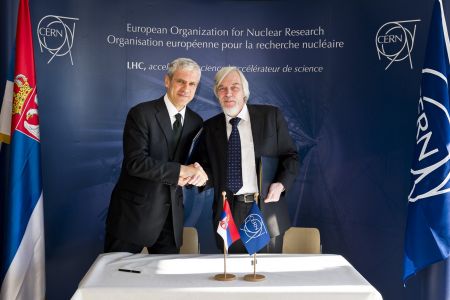 On 10th January, a delegation from Serbia, led by President Boris Tadic, arrived at CERN to sign the agreement that would grant Serbia associate membership to CERN, as a step towards full membership. The agreement has to be ratified by the Serbian parliament before it comes into force.

Serbia has had a long relationship with CERN, dating back to the days of the former Republic of Yugoslavia, which was a founding member of CERN in 1954 although it withdrew from the organisation in 1961. In 1991, physicists from three Yugoslav republics – Serbia, Slovenia and Croatia – started working towards regaining membership to CERN, but the plans fell apart when the Republic of Yugoslavia broke up the following year.

Petar Adzic (known as Peter at CERN) was one of these three physicists and currently heads the Serbian team at CMS. Adzic, from the University of Belgrade and the Vinca Institute of Nuclear Sciences, started his work at CERN in the DELPHI experiment at LEP in 1995. In 1997, he started to work with CMS as part of the Greek team (from Demokritos), a few years before Serbia officially joined the experiment. “Serbia was under UN sanctions until 1995 as a result of the Yugoslav Wars, but resumed the relationship with CERN through informal collaboration when the sanctions were lifted,” says Adzic. Following this, Serbia signed a general agreement on technical and scientific co-operation with CERN in 2001, and was admitted to CMS officially in 2002.

Adzic, who also chairs the Serbian Committee for relations with CERN, continues: “In 2008, we sent a letter of intent to the CERN Director General, seeking CERN membership for Serbia.” The response from CERN was positive, and the Serbian Committee supported by the Serbian Ministry of Science proceeded to prepare and submit a formal application that was then accepted by the CERN Council. On 16th December 2011, the CERN Council unanimously voted to admit the Republic of Serbia as an Associate Member of CERN.

On this occasion, the Director General of CERN, Rolf Heuer, said: “Serbia’s Associate Membership is good for CERN and good for Serbia, giving CERN access to Serbian scientific expertise, while Serbian science and industry will benefit from access to one of the world's leading centres for science and innovation.”

Dragoslav “Laza” Lazic, a Serb who works for Boston University agrees: “The first outcome is access for Serbians, especially our summer students, to all the resources and facilities that come with membership. It also provides our bright physicists with the opportunity to be CERN fellows. I see it as a big door open for improved education of our young researchers.”

There are around 30 Serbians working at CERN, of whom 10 work on CMS. Serbian hardware contributions to CMS commenced in 2001, when 75 corner pieces for the hydraulic locking mechanism – commissioned, built and tested in Serbia – were delivered. “When you move the CMS disks into position for final assembly, the last 100 mm of movement is done by these hydraulics that then lock the corners into position,” explains Lazic.

“In 2007, the Serbian team completed the ECAL safety system (ESS), which monitors the temperature of the ECAL sub-detector with high precision,” says Adzic. “We are also working on a new ECAL relative humidity system (RHS) that is almost complete and will be installed during the shutdown at the end of the year.”

The small team of Serbian physicists is involved in several physics studies, including in the search for the Higgs boson, where they developed a part of software to identify the background in instances in which the Standard Model Higgs boson decays into two photons. Some Serbs are working on cross-section measurements for Zγ processes (via both electron and muon decay channels), on searches for anomalous triple gauge neutral boson couplings (ZZγ, Zγγ) within di-boson final state Zγ, and on searches for Supersymmetry particles through same-sign lepton decays. In heavy-ion collisions, members of the Serbian team investigate particle flow.

As a consequence of CERN membership, Serbian physicists and engineers will no doubt make an even greater contribution to the search for the undiscovered at CMS. Lazic smiles and says, “We are well aware of the possibilities that have opened up to us.”