Shielding the outer muon barrel chambers of CMS for HL-LHC : preparing an umbrella before the rain 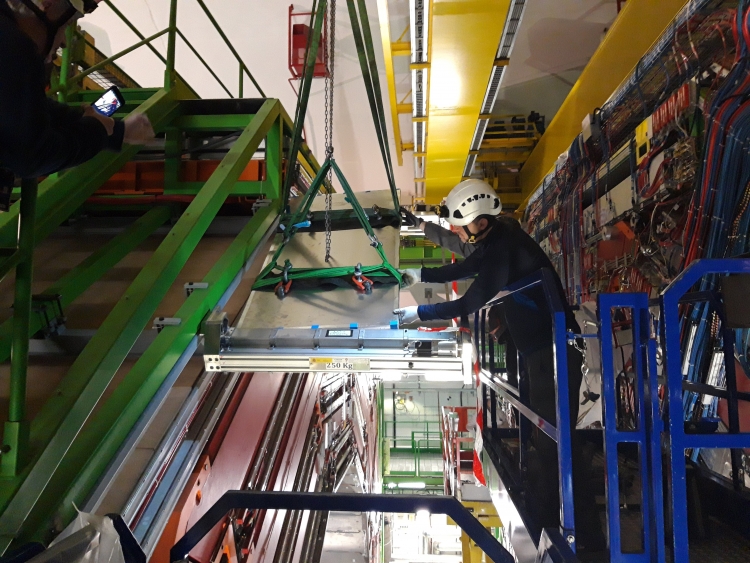 CMS has just finished wrapping the barrel with a new layer which is not a new detector but a brand new protection system aimed to keep the outer barrel muon chambers shielded from background radiation present in the experimental cavern during collisions. The installation of this special shielding system has been completed in October 2020 after more than one year and half of intermittent installation.

Being a particle detector in a hadron collider is a challenging task for various reasons. For starters, our detectors work in a rather harsh radiation environment. In the case of the muon detectors, they are in charge of measuring and identifying muons, but those are not the only particles which are around; background particles make the mission of these external muon detectors difficult. Imagine measuring drops from a leaky faucet in the middle of a rainstorm: an umbrella would certainly help. Usually most of the radiation comes from the primary particles in the interaction point, so it is somewhat surprising that the outermost detectors of CMS do not enjoy a “dry” environment, but on the contrary, suffered the highest level of radiation in the barrel muon region so far, see Fig. 1 (left). The reason is that, while the chambers are very much isolated from the interaction point, they are “naked” to stray radiation incoming from the outside of the detector.  It turns out that neutrons, due to their large elastic cross section and longish decay time (~1/4 h), populate the experimental cavern during collisions representing the dominant signals measured by the outer chambers. These neutrons come mainly from particles that escape the inner detector through the forward shielding, which CMS is also planning to reinforce in Long Shutdown 2 (LS2), and the endcap-barrel gap. 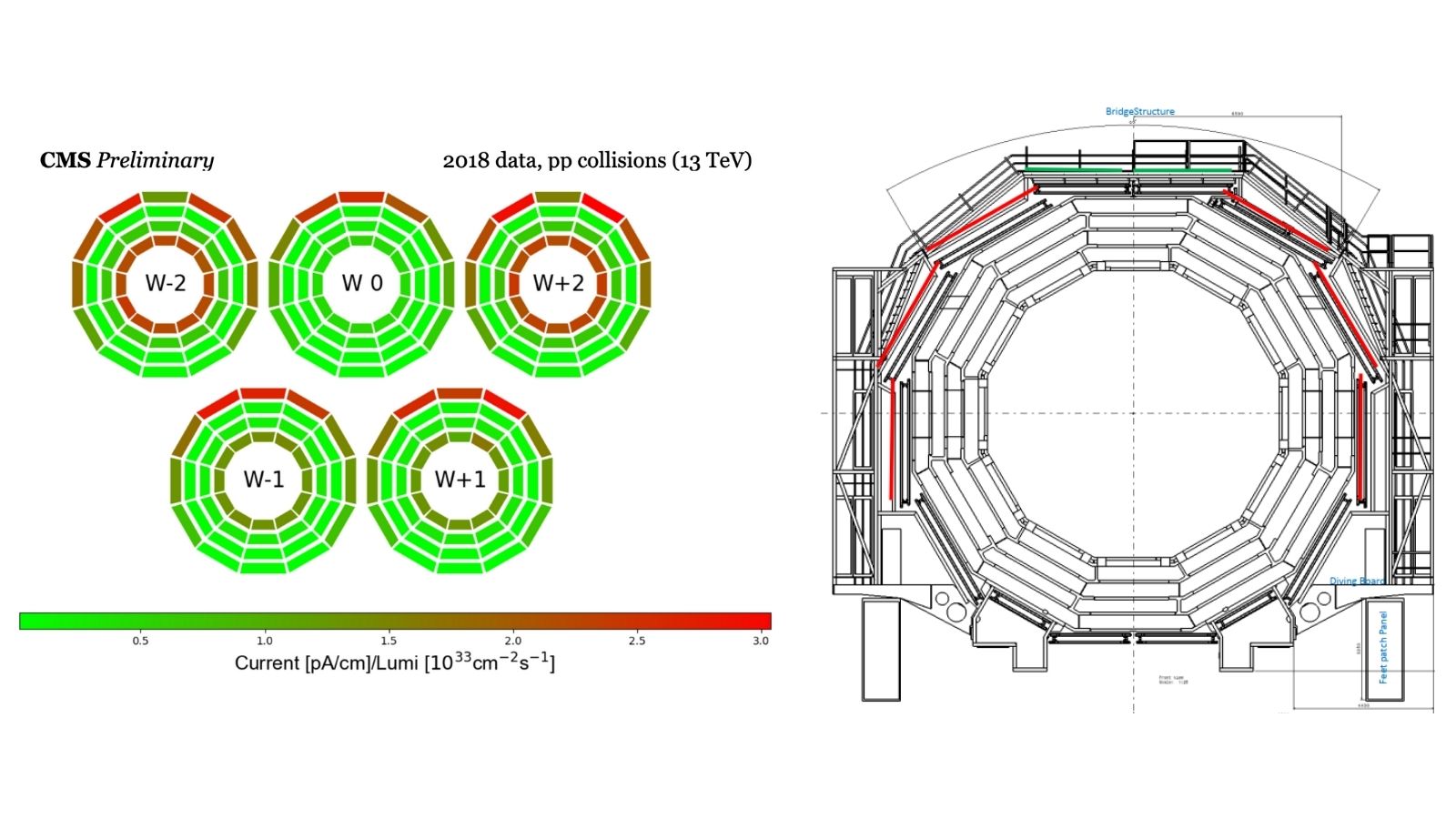 Fig. 1 Integral of the signals generated in the chamber anodes during collisions as measured by the High Voltage (HV) current (left). The top chambers of the outer wheels (W+-2) were covered with prototype shields. Sectors covered in LS2 installation (right).

The outer Muon barrel station, located outside the return yoke of the CMS solenoid, is composed of the largest chambers in CMS (DT MB4). It covers a cylinder of an area of ~600 m2 with 8 sensitive layers, providing the precise muon position and direction in the R-phi plane for the trigger system and the offline reconstruction, as well as a layer of Resistive Plate Chambers (RPCs) providing precise timing. The observed present levels of radiation during the running of the LHC is not a problem for the performance or longevity of the large Drift Tube chambers. The same for CMS RPCs which are qualified for much larger backgrounds, beyond what is expected at High-Luminosity-LHC (HL-LHC). However, measurements at the CERN GIF++ irradiation facility indicated that wire aging could reduce the single hit efficiency of the more irradiated Drift Tubes chambers after integrating the full HL-LHC luminosity [1]. To ensure the longevity of the chambers in HL-LHC, a relatively thin borated-polyethylene+lead shield has been installed over all the top MB4s during LS2. Its final attenuation depends on the spectrum of the radiation background in the experimental cavern, which is not precisely known. Nonetheless several tests with prototypes performed during Run 2 make us expect a factor 2-3 attenuation could be achieved with 7 mm of lead + 3 cm of borated polyethylene, which to first order will enhance the lifetime of the chambers by a similar factor. In a nutshell we are extending the lifetime of our detectors by keeping them sufficiently “dry”, sheltered behind our special umbrella.

The shielding assemblies, encapsulated in Aluminum, to avoid direct lead contact and for fire safety reasons, as well as the supporting steel structures have been produced at collaboration institutions and transported to CMS site at Cessy. The assemblies, ~200 kg each, are inserted as cassettes into a new support structure which hangs from the green  scaffolding surrounding the barrel yokes where electronics, gas, and cooling infrastructure for the detector are located. Detailed mechanical simulations were performed, as well as follow up measurements of the deformation of this structure to insure the safety of the installation under the extra load of ~40 tons. Teams of technicians have been working intermittently over the last one year and a half to assemble this “mechano” from mobile elevated platforms outside the wheels as well as inside the green scaffolding. The task has been profiting substantially from the second UXC crane commissioned before LS2 and the incredible precision of the P5 Transport team crane drivers. 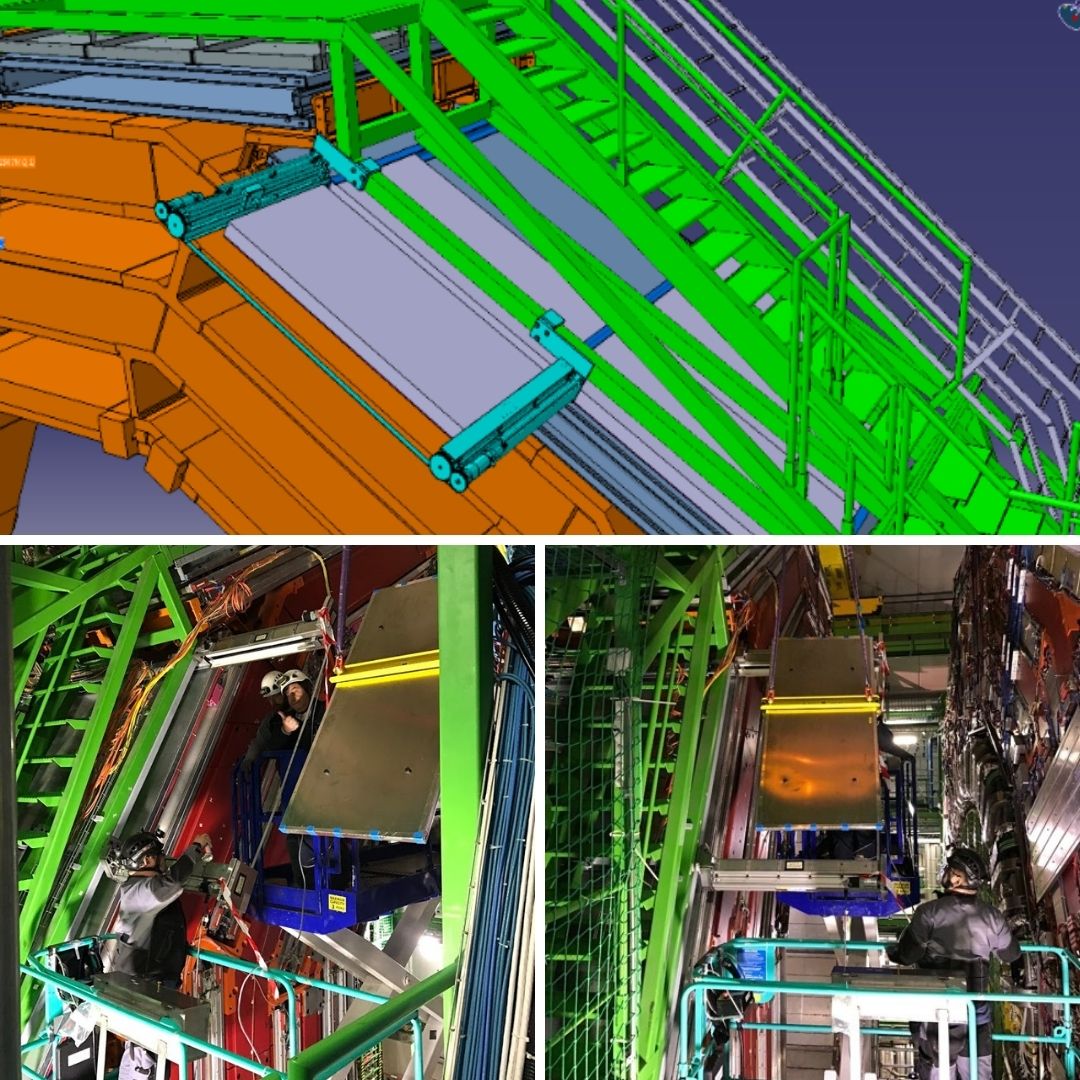 Fig 2. Some pictures of the installation tool and a 3D model where the location of the shielding, in gray, is better visible.

Doing the installation piece by piece was no small feat, as can be seen in Fig.2, so everybody participating was very happy when the last piece was finally installed

The structure is finally completed, and will keep the detectors in a much safer state during Run 3 and beyond. The DT group decided to dedicate this shielding to our dear late colleague Professor Alberto Benvenuti, former DT Technical Coordinator who sadly passed in April 2018. 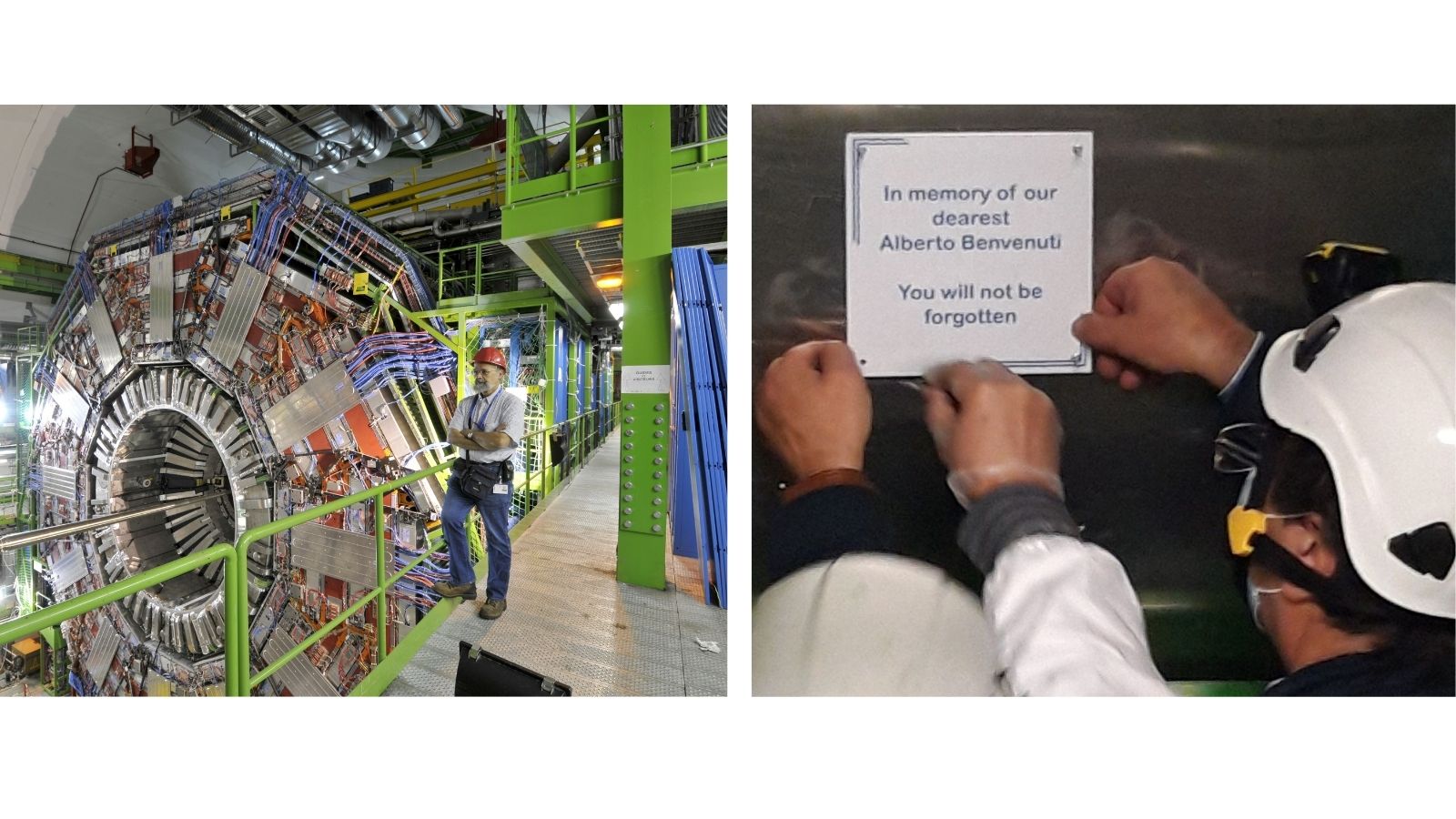 Fig 3. Professor Alberto Benvenuti in the CMS cavern during LS1. Alberto led of the installation of the DT chambers in CMS during construction and was a key member of the DT team. Long term collaborators Vincenzo Giordano and Dommenico Dattola (right) fixing the plate dedicating the MB4 shielding to the memory of Alberto.