A very rare decay has been seen by CMS 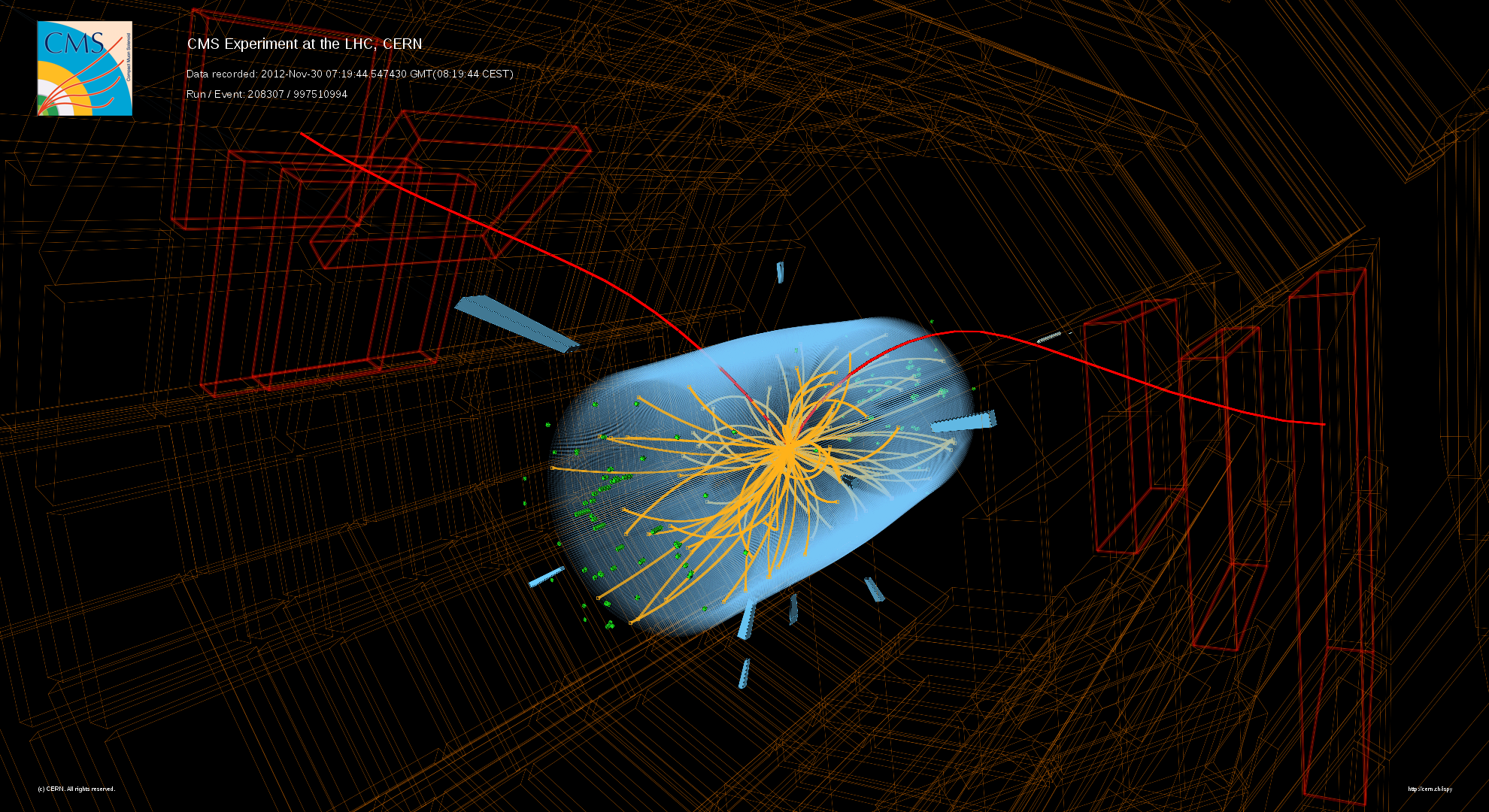 Image 1: A candidate B&lt;sub&gt;s&lt;/sub&gt; &amp;rarr; &amp;mu;&amp;mu; event recorded in the CMS detector in 2012, produced in proton-proton collisions at 8 TeV. (Ultra-high-resolution image below, Image 5.)

UPDATE: Last Friday, CMS and LHCb reported their individual results for the decay of Bs mesons into pairs of muons (see CMS results below). Yesterday, both collaborations jointly presented a preliminary combination of their measurements at the EPS HEP conference. This preliminary analysis measures the rate of decay to be 2.9±0.7 x 10–9, consistent with the predictions of the Standard Model; the significance of this observation is more than 5σ. A precise evaluation of the significance as well as a more detailed combination of the decay rates are in the works. In the meanwhile, this important discovery is yet another feather in the cap for the LHC, and is a testament to the excellent performance of both CMS and LHCb.

The combined results also show a slight excess in the data in the B0 → μμ channel, consistent between the two experiments, but it is not statistically significant.

The statement below is also available as PDF files in:

CMS has seen an important rare decay predicted by the Standard Model of particle physics. Strong evidence for the decay of Bs mesons (pronounced B-sub-s) to pairs of muons, which comes after a wait of roughly 25 years, will be announced later today at the biennial EPS-HEP Conference in Stockholm, Sweden.

For every billion Bs mesons produced, only about three are expected to decay into two muons, heavier cousins of the electron. These decays are ideal processes in which to search for signs of new physics: a deviation from the precise predictions of the Standard Model (SM) would indicate the presence of physics “beyond the Standard Model” (BSM physics).

Looking for something new

For all its spot-on predictions over the years, we know that the extremely successful Standard Model of particle physics is incomplete: it offers no explanation for the cosmological evidence of dark matter, nor does it account for the dominance of matter over antimatter in the universe. If BSM physics lies within its grasp, the LHC will show it to us, and CMS has been systematically searching for indications of various proposed extensions to the Standard Model.

The decay of B mesons (consisting of one bottom quark and a lighter quark) into two muons (μ) is an ideal place to search for indirect evidence for BSM physics. The decays of two types of B mesons – B0 (made of a bottom quark and a down quark) and Bs (made of a bottom quark and a strange quark) – into pairs of muons are highly suppressed in the SM, yet several proposed extensions of the Standard Model predict either a significant enhancement or an even stronger suppression of these decays. If a measurement of the decay rates of either of these were to be inconsistent with the SM prediction, it would be a clear sign of BSM physics. Over nearly 25 years, a dozen experiments at many different particle colliders have searched for these elusive decays. The established limits have improved by four orders of magnitude in this time, as the sensitivities approach the values predicted by the SM. In the Bs → μμ case, LHCb showed the first clear evidence for the existence of the decay in November 2012, with a significance of 3.5σ.

Identifying and counting the B’s

The experimental search for these rare processes requires one to find a few signal events among a potentially overwhelming number of background events: only three out of every billion Bs mesons are expected to decay into two-muons, the rate being even lower for the B0.

The first hurdle in finding the rare signal events is the identification of potential candidates produced in the proton-proton collisions inside the CMS detector. CMS selects around 400 of the most interesting collision events each second, of which roughly 10 events are for the B → μμ searches. These events are further classified according to the properties of the two muons, to reject as much of the background as possible while retaining most of the signal events.

In addition to looking for the two muons produced from the B decays, CMS must also know to reasonably good precision how many B mesons were produced in total. These numbers are evaluated from counting other, well-studied decays of B0 mesons.

The first sight of an expected visitor

Data collected by CMS in 2011 and 2012, corresponding to samples of 4.9 fb–1 and 20.4 fb–1 (inverse femtobarns[2]) respectively, were used for this search. The resulting di-muon mass distribution reveals an excess of Bs → μμ events over the background-only expectation, corresponding, with a significance of 4.3σ, to a decay rate of 3.0+1.0–0.9 x 10–9, where the uncertainty reflects statistical and systematic effects. A paper reporting this result has been submitted to Physical Review Letters.

Where do we go now?

The thrill of this remarkable measurement comes with some disappointment for those seeking new physics. Much of the appeal of the Bs → μμ decay channel has been in its potential to reveal cracks in the Standard Model. However, the story is far from over. As the LHC continues to provide additional data, the precision with which CMS and other experiments can measure these key decay rates will steadily improve, and increased precision will be helpful in limiting the viable SM extensions and could point the way ahead to what might lie beyond today’s HEP horizon. Additionally, the next LHC run, starting in 2015, will provide the increase in sensitivity that CMS needs to measure B0 → μμ rates at the level of the SM prediction.

Seeing this rare Bs decay marks a major milestone in a 25-year-long journey, but much uncharted territory lies ahead of us in the particle physics landscape.

CMS is one of two general-purpose experiments at the LHC that have been built to search for new physics. It is designed to detect a wide range of particles and phenomena produced in the LHC's high-energy proton-proton and heavy-ion collisions and will help to answer questions such as: "What is the Universe really made of and what forces act within it?" and "What gives everything mass?" It will also measure the properties of well-known particles with unprecedented precision and be on the lookout for completely new, unpredicted phenomena. Such research not only increases our understanding of the way the Universe works, but may eventually spark new technologies that change the world in which we live as has often been true in the past. The conceptual design of the CMS experiment dates back to 1992. The construction of the gigantic detector (15 m diameter by nearly 29 m long with a weight of 14000 tonnes) took 16 years of effort from one of the largest international scientific collaborations ever assembled: 3275 physicists (including 1535 students) plus 790 engineers and technicians, from 179 institutions and research laboratories distributed in 41 countries all over the world.

[1] The standard deviation describes the spread of a set of measurements around the mean value. It can be used to quantify the level of disagreement of a set of data from a given hypothesis. Physicists express standard deviations in units called “sigma”. The higher the number of sigma, the more incompatible the data are with the hypothesis. Typically, the more unexpected a discovery is, the greater the number of sigma physicists will require to be convinced.

[3] Confidence level is a statistical measure of the percentage of test results that can be expected to be within a specified range. For example, a confidence level of 95% means that the result of an action will probably meet expectations 95% of the time.

* This sentence was amended on 30 July to fix an incorrect expression of the significance in terms of probability.