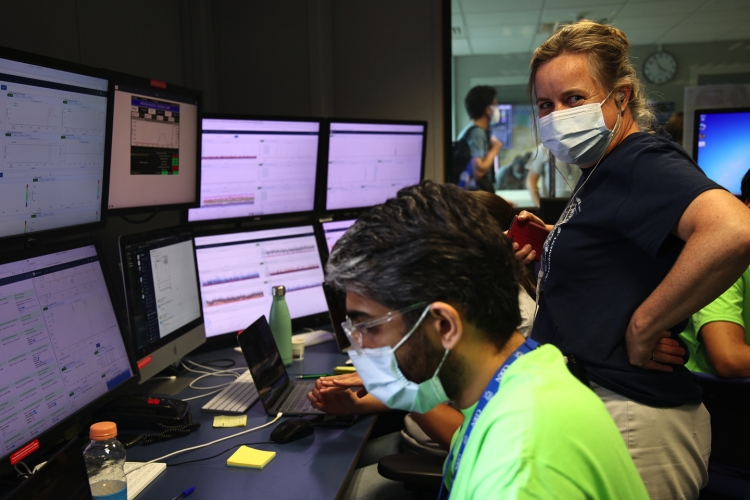 While the CMS detector takes data 24 /7, physicists take turns in the control room every 8 hours, ensuring continuity of operations and keeping the detector running continuously. Experts located around the world are present at all times to respond to requests from the shift crew.

Since the first stable high-energy collisions that took place on July 5, activities associated with the CMS detector have shifted gears. At the end of the CERN live event on July 5, the evening and the following night were already devoted to the first calibrations of the pixel detector with high energy beams.

Over the following weeks, the accelerator gradually increased the number of protons colliding in the machine, thereby inducing an increase in the collision rate. This is a crucial step for the CMS detector. The muon chambers were able to collect enough muon particles to calibrate and optimize their response. The calorimeters and the tracker are also aligned, and the luminometers are at this stage fine-tuning their accuracy. As of today, the LHC is almost at the maximum intensity that it will be able to deliver during Run 3. This allowed CMS to set up the entire trigger system, which is extremely valuable to select the physics events covering the vast research program planned to take place during Run 3 by the CMS collaboration.

With conditions being rather stable, there are no major plans for a change or a new installation within the CMS apparatus during the next LHC technical stop scheduled for a few days in September. Instead, later in the year,  we will focus on preparing the detector and the associated software in more depth for the first Run 3 heavy ion campaign, which will be held in November. This dedicated campaign will close this very special year, where the LHC successfully restarted and where already many collision events are recorded for physics analyses. The long research journey of Run 3 is now fully launched!