What do we already know? 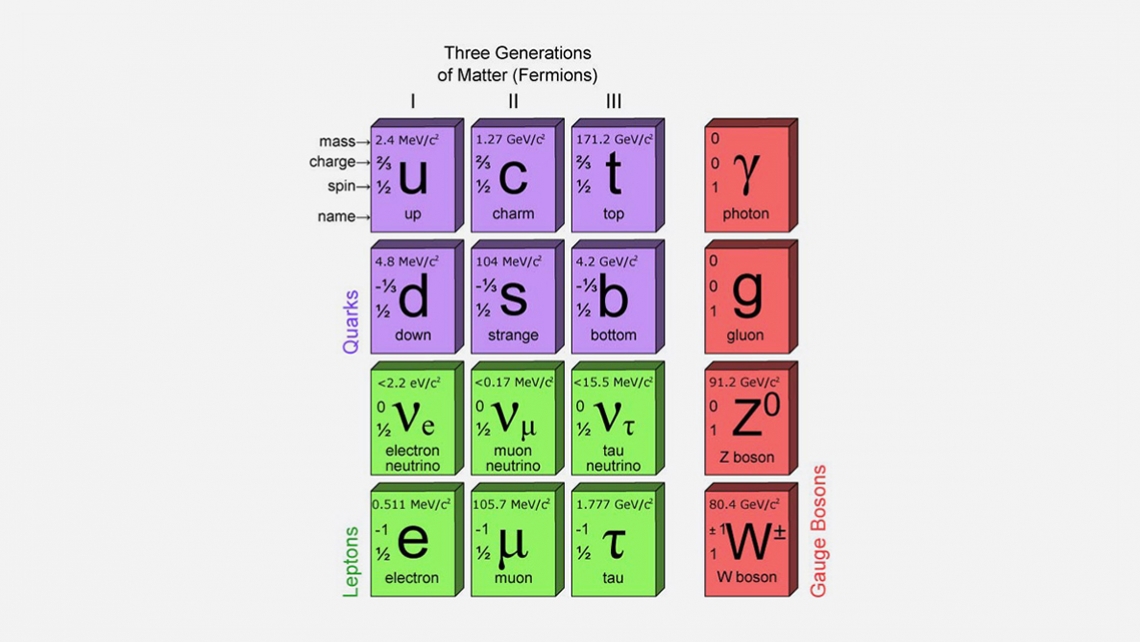 The theories and discoveries of thousands of physicists over the past century have resulted in a remarkable insight into the fundamental structure of matter: everything that has been directly observed in the Universe until now has been found to be made from twelve basic building blocks called fundamental particles, governed by four fundamental forces. Our best understanding of how these twelve particles and three of the forces are related to each other is encapsulated in the Standard Model of particles and forces. Developed in the early 1970s, it has successfully explained a host of experimental results and precisely predicted a wide variety of phenomena. Over time and through many experiments by many physicists, the Standard Model has become established as a well-tested physics theory.

Everything around us is made of matter particles.These occur in two basic types called quarks and leptons.

Each group consists of six particles, which are related in pairs, or ‘generations’. The six quarks are paired in the three generations – the 'up quark' and the 'down quark' form the first generation, followed by the 'charm quark' and 'strange quark', then the 'top quark' and 'bottom quark'. The six leptons are similarly arranged in three generations – the 'electron' and the 'electron-neutrino', the 'muon' and the 'muon-neutrino', and the 'tau' and the 'tau-neutrino'. The electron, the muon and the tau all have an electric charge and mass, whereas the neutrinos are electrically neutral with very little mass.

There are four fundamental forces at work in the Universe: the strong force, the weak force, the electromagnetic force, and the gravitational force. They work over different ranges and have different strengths. Gravity is the weakest but it has an infinite range. The electromagnetic force also has infinite range but it is many times stronger than gravity. The weak and strong forces are effective only over a very short range (the size of a proton) and dominate only at the level of subatomic particles. Despite its name, the weak force is much stronger than gravity but it is indeed the weakest of the other three. The strong force is, as the name implies, the strongest among all the four fundamental interactions.

We know that three of the fundamental forces result from the exchange of force carrier particles, which belong to a broader group called ‘bosons’. Matter particles transfer discrete amounts of energy by exchanging bosons with each other. Each fundamental force has its own corresponding boson particle – the strong force is carried by the ‘gluon’, the electromagnetic force is carried by the ‘photon’, and the ‘W and Z bosons’ are responsible for the weak force. Although not yet found, the ‘graviton’ should be the corresponding force-carrying particle of gravity.

The Standard Model includes the electromagnetic, strong and weak forces and all their carrier particles, and explains extremely well how these forces act on all the matter particles. However, the most familiar force in our everyday lives, gravity, is not part of the Standard Model. In fact, fitting gravity comfortably into the framework has proved to be a difficult challenge. The quantum theory used to describe the micro world, and the general theory of relativity used to describe the macro world, are like two children who refuse to play nicely together. No one has managed to make the two mathematically compatible in the context of the Standard Model. But luckily for particle physics, the effects of gravity on their experiments have been so weak as to be negligible. Only when we have matter in bulk, such as in ourselves or in planets, is gravity observed to dominate. So the Standard Model still works well despite its reluctant exclusion of one of the fundamental forces.

...it is not time for physicists to call it a day just yet. Even though the Standard Model is currently the best description we have of the subatomic world, it does not explain the complete picture. The theory incorporates only three out of the four fundamental forces, omitting gravity. Alas, Newton would be turning in his grave! Nor does it explain why the many well-established basic parameters such as particles' masses have the values they do. There are also important questions it cannot answer, such as what is dark matter, what happened to the missing antimatter, and more.

Last but not least, an essential ingredient of the Standard Model, a particle called the Higgs boson, has yet to be found in an experiment. The race is on to hunt for the Higgs – the key to the origin of particle mass. Finding it would be a big step for particle physics, although its discovery would not write the final ending to the story.

So despite the Standard Model's effectiveness at describing the phenomena within its domain, it is nevertheless incomplete. Perhaps it is only a part of a bigger picture that includes new physics that has so far been hidden deep in the subatomic world or in the dark recesses of the Universe. New information from experiments at the Large Hadron Collider are sure to help us find more of these missing pieces.