And the Higgs boson said, "Let there be light" 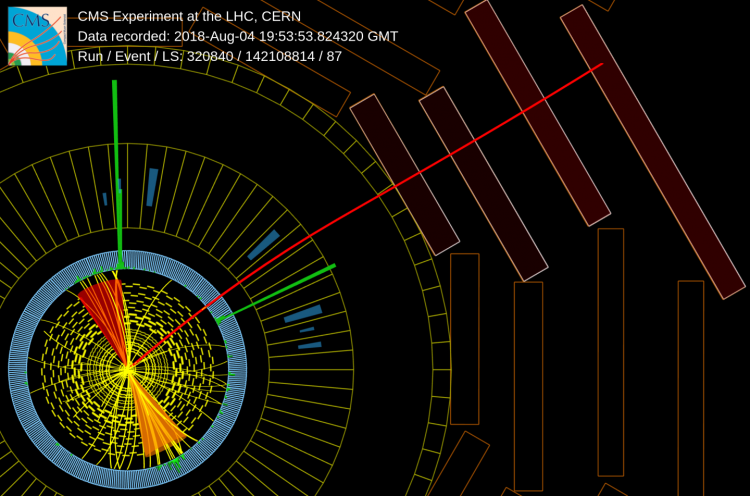 The Higgs boson is an extremely rare particle. At the Large Hadron Collider (LHC), where bunches of protons collide at more than 99.9999% of the speed of light up to forty million times per second, a Higgs is produced around once per second. The Higgs only lives for about one-millionth of a billionth of a billionth of a second, before transforming into something else entirely. Approximately one in five hundred times, it transforms into pure bursts of light – two photons.

In this analysis, the CMS Collaboration has reported its most comprehensive measurements of Higgs boson properties to date, using events where the Higgs boson decays to two photons. The result uses all the data collected by the CMS experiment between 2016 and 2018, allowing for unprecedented levels of precision. By using sophisticated analysis techniques, it becomes possible to disentangle the different ways in which a Higgs boson can be produced at the LHC and hence build up a more detailed description of this elusive particle.

The discovery of the Higgs boson by the ATLAS and CMS collaborations in 2012 marked the completion of the standard model of particle physics; our current best theory to describe elementary particles and their interactions. In the standard model, the Higgs mechanism explains how elementary particles attain their masses via electroweak symmetry breaking, and a consequence of this theory is the prediction of a fundamental scalar particle, the Higgs boson. When both of the ATLAS and CMS experiments reported a significant excess of events (i.e. processes occurring in the detector) consistent with the Higgs boson, it was heralded as one of the great triumphs of particle physics. However, despite this success, many unanswered questions remain. To name just a few: Why is the Higgs boson so unnaturally light? What is the origin of Dark Matter? Where does gravity fit into the picture? In the quest to explain such fundamental questions, we are yet to observe any significant deviations from standard model predictions.

The lack of direct observations of new particles at the LHC has resulted in a paradigm shift towards precision measurements; an alternative approach in the search for new physics. The general idea is that physics beyond-the-standard model can interact and interfere with standard model particles and subsequently leave an imprint on their properties. By precisely measuring such properties we may see a hint of new physics. For the Higgs boson, precision measurements of its couplings to other particles provide a unique tool to probe the electroweak symmetry breaking sector, an area which many believe to be the hiding place of new physics.

In the past, measurements have been limited to those concerning the overall number of Higgs bosons produced at the LHC or the rates of the major Higgs boson production mechanisms. Due to the exceptionally large data set collected by the CMS experiment, it is now possible to perform more finely grained measurements. Simplified template cross sections (STXS) have been developed to provide a consistent framework on which to base these measurements at the LHC. In the framework, the major Higgs boson production modes are sub-divided into different regions, or “templates". These templates are defined by certain properties of the event, such as the transverse momentum of the Higgs boson or the number of additional sprays of particles, known as jets. The complete STXS framework in its current state is shown below, with the different colours corresponding to the different Higgs boson production modes.

Figure 1: A schematic showing the “bins” of the simplified template cross section framework. The production modes, shown in different colours, are split into different templates according to certain properties of the events. Our aim is to measure the cross section in each of these bins to build up a more granular picture of the Higgs boson.

The goal is then to make a measurement of the production rate (also known as the cross section) in each of the different templates to build up the most detailed possible description of Higgs boson production. On top of this, we are able to identify specific templates which are particularly sensitive to new, beyond-the-standard model physics, such as those in which Higgs boson is produced with extremely high transverse momentum.

In this analysis, events in the detector are required to have two photons above a certain energy, consistent with originating from the decay of a Higgs boson. The events are then categorised according to the different Higgs boson production mechanisms by requiring the signature of additional particles in the event. For example, when a Higgs boson is produced via the vector boson fusion (VBF) mechanism, we expect two jets to be produced in the forward regions of the detector. Therefore, by tagging events with these "forward" jets, it is possible to design analysis categories which are enriched in vector-boson fusion events. In a similar fashion, categories are constructed to target vector boson associated production (VH), production in association with top quarks (ttH/tH) and production via the fusion of gluons (ggH).

A combination of machine learning algorithms is used to increase the purity of the analysis categories and to reject as many background events as possible. For the first time, we use a Deep Neural Network in the attempt to separate events in which the Higgs boson is produced with a single top quark (tH) from production with a pair of top quarks (ttH). This is a difficult task as the two production modes look very similar in the detector. Moreover, single top quark production is an extremely rare process and is yet to be observed with any statistical significance at the LHC. Nevertheless, measurements of the tH production rate will provide invaluable information about the nature of Higgs boson couplings to other particles. The image below shows a potential single top quark production event in the CMS detector, where the Higgs boson decays to two photons.

Figure 2:  The Higgs boson decays to two photons, which deposit energy in the electromagnetic calorimeter. These two large energy deposits are shown as the green blocks. The top quark decays into a W boson and a b quark. The long red line depicts the muon from the decay of the W and the red cone depicts the b-tagged jet from the b-quark. The jet produced from the other quark is shown as the orange cone.

The categories are further divided into subcategories, designed to be enriched in events from different STXS templates (see above). In doing so, it becomes possible to measure their individual cross sections and hence build up this much-desired granular description of the Higgs boson. A Boosted Decision Tree algorithm is used for Higgs bosons produced via gluon fusion to predict the most likely template to which an event belongs. For the other production modes, we simply place boundaries on quantities that we measure in the detector to align with the template definitions in Figure 1. For example, in ttH production, we use the measured transverse momentum of the photon pair to divide the categories. This allows us to make the first-ever measurement of ttH production in the individual templates of different Higgs boson transverse momentum.

Due to the excellent performance of the CMS electromagnetic calorimeter, it is possible to measure the energy of photons very precisely and subsequently determine the mass of a photon pair with great precision. Because of this, photon pairs originating from a Higgs boson decay appear as a clear peak in the diphoton mass distribution on top of the smoothly falling spectrum of background events. In order to extract the cross sections, a model is constructed to describe the shape of the diphoton mass distribution for the signal and the remaining background events in each of the analysis categories. The plot below shows the model (in red) fit to data (black points) for all categories combined. Figure 4: A plot summarising the signal strength measurements with their respective uncertainties. The coloured points correspond to the per production mode signal strengths, whereas the black point is the overall signal strength. A value of one corresponds to the standard model prediction. In summary, this comprehensive analysis represents the most detailed measurement of Higgs boson production performed by the CMS collaboration. The results are consistent with the predictions of the standard model, such that the increased precision on the measured quantities leaves a smaller window in which any new physics could be hiding. Nevertheless, the uncertainties in the measurements are still dominated by their statistical component, and therefore adding new data will improve the precision. The next LHC run, planned to start in 2022, and the High-Luminosity LHC, starting around 2027, will lead to a vast increase in the available data. Furthermore, the combination of these measurements with those from different Higgs boson decay channels will improve the precision. In the search for new physics in the Higgs sector, it is imperative that we leave no stone unturned.