Any more Higgses we should know about? 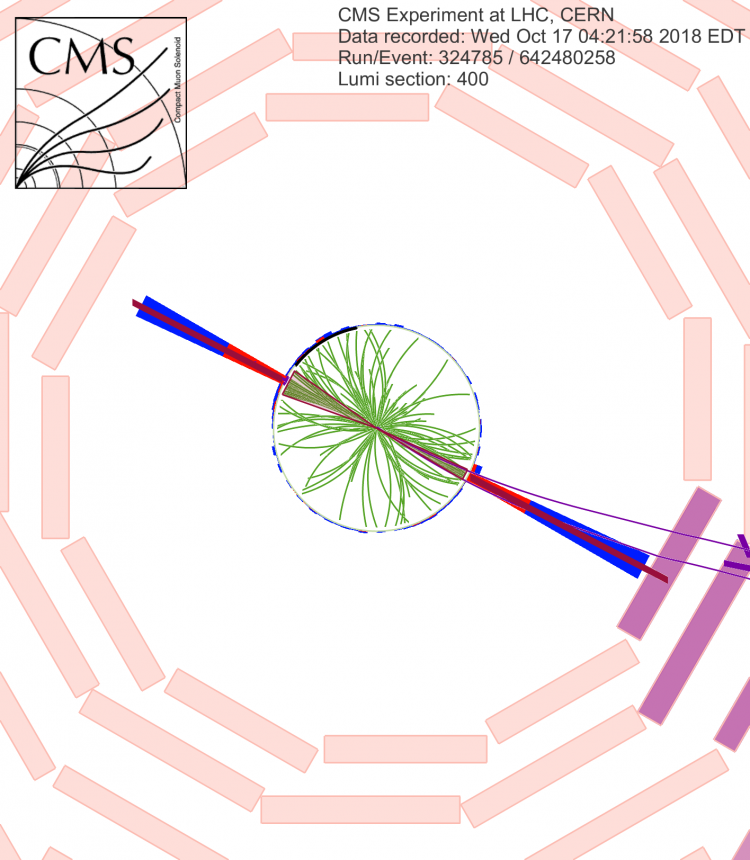 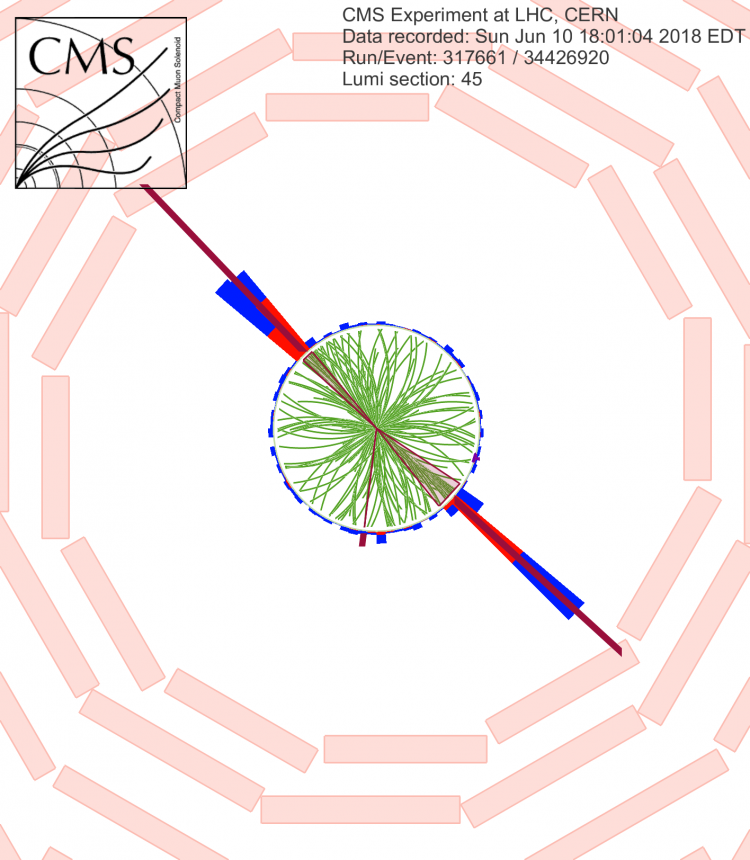 This year marked the ninth anniversary of the discovery of the Higgs boson; the Standard Model particle linked to the mystery of creating the mass of all the other fundamental particles through the so-called Higgs mechanism. While a single Higgs boson is sufficient for this mechanism to work, it may not be the only one. In fact, many “new physics” theoretical models predict more complicated Higgs mechanisms with one or more “partners” to the Higgs boson already discovered.  Indeed,  particle physics has historically surprised researchers with the existence of “multiple generations” of particles when the phenomena they were trying to explain only required one. For example, quarks and leptons come in three sets, though only the first generation is needed to explain how atoms are built. Therefore, searching for additional Higgs bosons in the LHC data is a natural next step in our examination of the Higgs mechanism.

The CMS collaboration has performed a new search hoping to find evidence of such an extended Higgs sector, in this case composed of at least two additional Higgs bosons. The first is a heavy partner of the Standard Higgs boson (called “X”),  while the second (called “a”) can naturally be much lighter and interacts with other fundamental particles in a manner similar to the  Higgs boson.  Since the Standard Model Higgs boson is known to decay prominently to pairs of b-quarks, this decay mode is an excellent way to look for these additional Higgs bosons. The most important production and decay process of these extended Higgs sector bosons in LHC proton-proton collisions is shown in Figure 1. 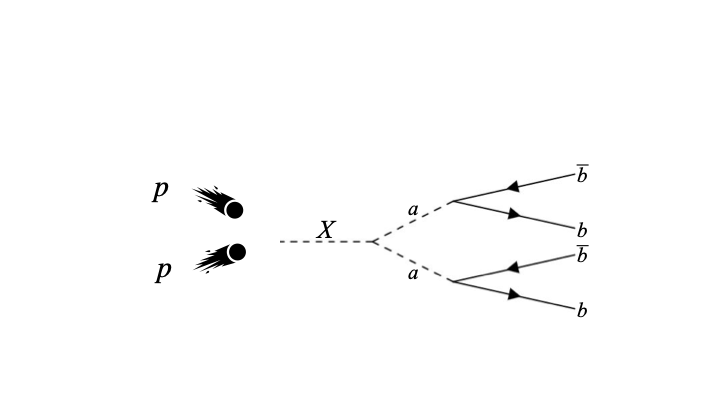 Figure 1: A diagram showing two protons colliding to produce the heavy Higgs (labeled “X”) and the lighter Higgs (labeled “a”), which then each decay into a b-quark pair.  The b-quark pairs have sufficient momentum such that they merge in the detector and are reconstructed using sophisticated techniques as a single large jet object with an internal structure consistent with two b-quarks.

While the diagram may look simple, quarks, and in particular b-quarks, leave complicated signatures in the detector: they decay almost immediately into complex showers of more stable particles (called “jets”).  Jets can fortunately be inspected for hints that the quark that initiated them was a b-quark (called “b-tagging”). However, in this case, there is an additional complication: as a consequence of X being very massive and a being very light, each a is produced with significant momentum, and as a result the two b-jets it decays to end up very close together in the detector.  So close, in fact, that the search algorithm reconstructs them as a single large jet (see Figure 2 for a good example event in the data). 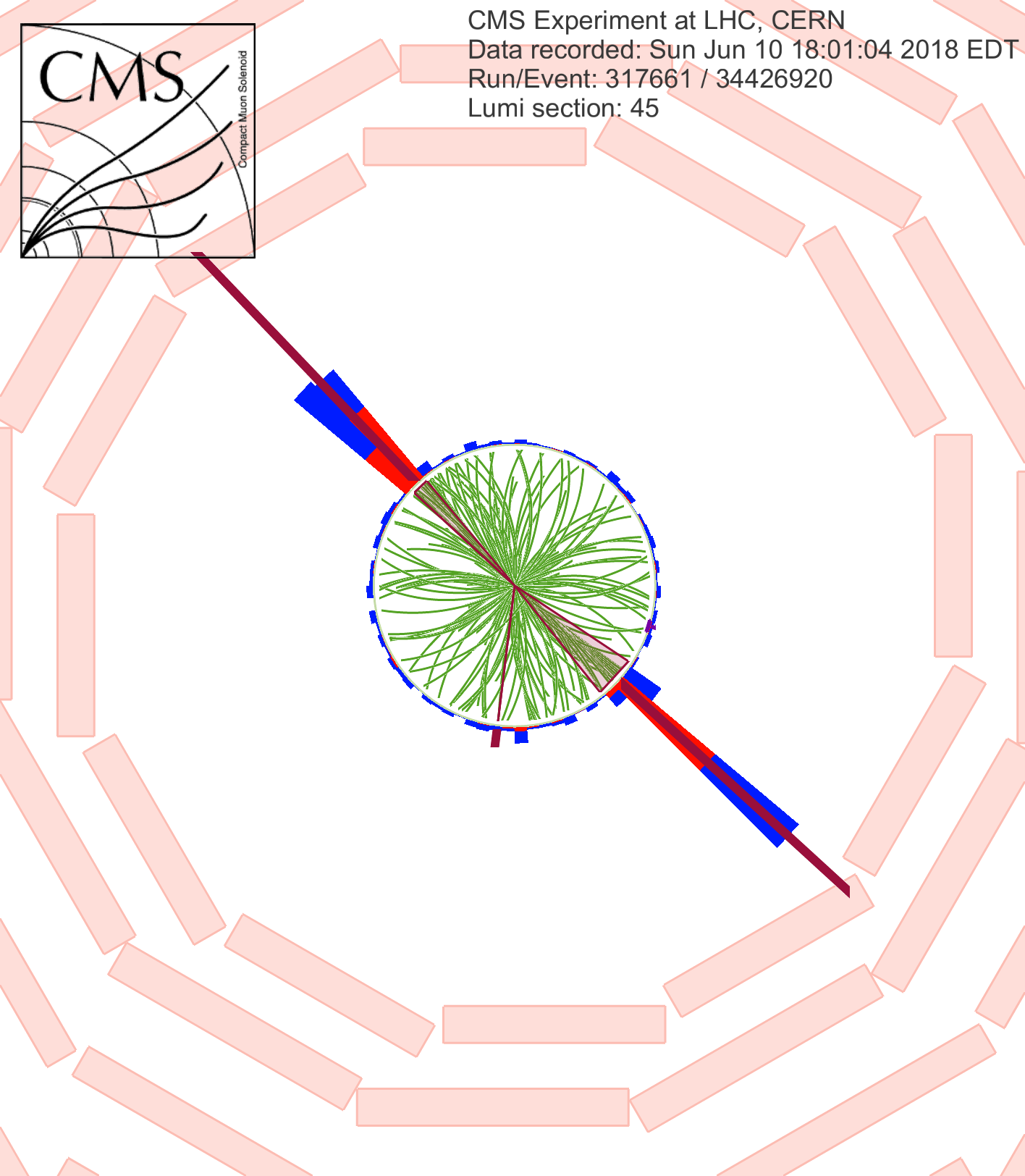 Figure 2: CMS data event consistent with the signature of interest: two back-to-back large radius jets (built by combining deposits in the calorimeters, shown in blue and red, with track information from the silicon pixel and strip detectors, shown in green) with similar masses. Additionally, both jets were identified by heavy flavor algorithms as likely having been initiated by two b-quarks each.

Furthermore, the search exploits this feature by using “double-b-tagging” to identify large jets that seem to have been created by two b-quarks, which helps to reduce the otherwise enormous background from pairs of jets produced at the LHC. Even then, careful estimates of the remaining background must be made to compare the data to expectation from the Standard Model, and to see if an excess of events is consistent with the signal (see Figure 3). 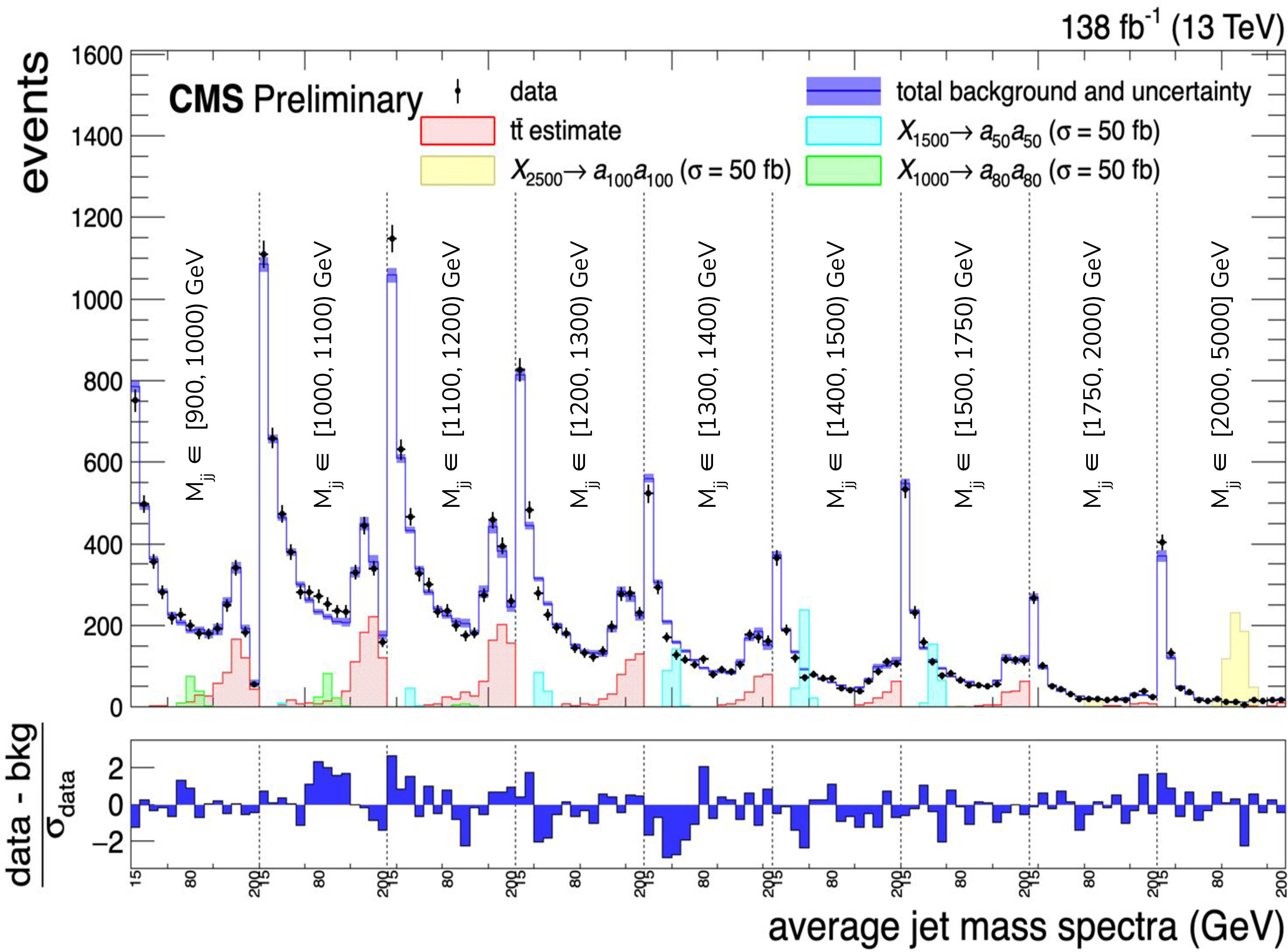 Figure 3: With potentially two new particles there are a lot of mass combinations to cover! Each bin represents the data for a particular mass combination (black points), as well as the number of events expected from Standard Model processes (in blue). A new physics signal would appear as a sharp peak of excess events as indicated by the green, cyan and yellow distributions.

The search for new bosons X and a, decaying to pairs of double-b-tagged jets, was conducted, and while no evidence for new Higgs bosons is present, a wide range and combination of masses (1 to 3 TeV for the heavier Higgs and from 25 to 100 GeV) for the lighter Higgs has been investigated for the first time!

This search may be the first of its kind, but has still a lot of potential. The CMS collaboration has already extensively explored potential extended Higgs sectors, but there are still many possible signatures that are unexplored. For example, the a, just like the Standard Model Higgs boson, need not only decay to pairs of b quarks; therefore, expanding the search to more final states could reveal a potential new signature. The LHC is now gearing up for its third data taking run, and the increased dataset will provide further opportunities for discovery.