"To be, or not to be conserved, that is the question": Lepton flavor in Higgs boson decays 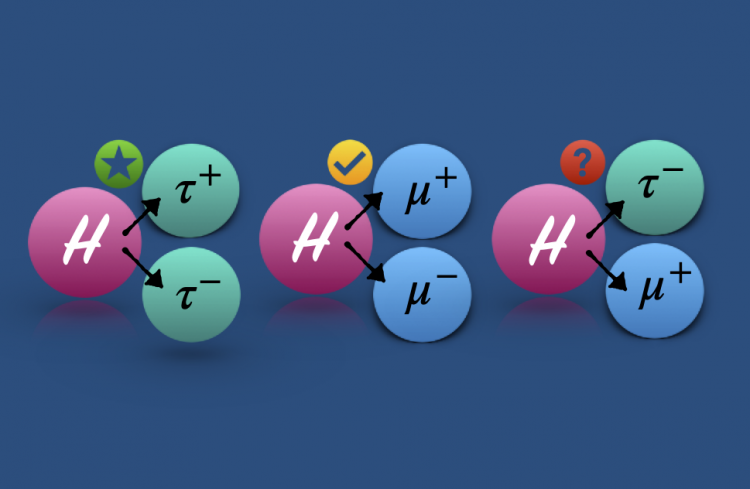 The term 'flavor' was introduced by Murray Gell-Mann and his student Harald Fritzsch to describe the different types of quarks known at the time – up, down, and strange – the list of quark flavors grew to six. The term is adapted for the lepton sector to describe the three types of charged leptons - electron, muon, and tau. These charged leptons correspondingly have their neutral counterpart - electron neutrino, muon neutrino, and tau neutrino. In the standard model, lepton flavor is always conserved. In other words, any interaction that occurs in the standard model preserves the flavor of leptons that are involved in the exchange. The standard model does not conserve quark flavor and does not explain why this is so different for leptons. This difference is one of the important open puzzles in particle physics.

In the mid-1960s, observations showed a large discrepancy from the flux of solar neutrinos as predicted from the Sun's luminosity. The Super-Kamiokande and Sudbury collaborations finally resolved this discrepancy in 2002, and the explanation was attributed to the oscillation of neutrinos of one flavor to another flavor. This suggests that lepton flavor is not conserved in the neutral sector. Neutrino oscillations have driven considerable motivation to probe for non-conservation of the lepton flavor for charged leptons, also called lepton-flavor violation. Experiments like MEG and BABAR have undertaken the search for lepton-flavor violation, investigating if a muon can decay into an electron and photon or a tau can decay into a lighter lepton and photon. The search for these processes hasn't shown any deviation from the standard model, and no charged lepton-flavor violation has been observed to date.

The CMS collaboration has performed a search for lepton-flavor violating decays of the Higgs boson using the data collected in proton-proton collisions from 2016 to 2018. In particular, the search looks for the Higgs boson decaying into a muon and a tau lepton or an electron and a tau lepton. As the tau lepton's lifetime is tiny, it decays inside the detector into either charged and neutral hadrons (mainly pions and kaons) or lighter leptons along with neutrinos. A deep learning technique is used to identify the tau lepton that decays into hadrons and reduce its probability of getting misidentified. Using this deep learning technology has helped in increasing the signal-to-background ratio.

Figure 1: An event similar to the lepton flavor violating decay of the Higgs boson, produced with the gluon fusion production mechanism. The red track corresponds to a muon, while the red cone along with its corresponding calorimeter deposits is the tau lepton.

The CMS experiment will start collecting data again from the beginning of 2022. In 3 years, the available data is expected to double. The high luminosity phase of the LHC starts from 2027, and a much larger dataset is anticipated by the end of its operation. With much larger datasets, the future LHC runs will make it possible to search for much more rare lepton-flavor violation. Apart from the searches at the LHC, new experiments like Mu2e are currently being designed, that anticipate probing a muon transitioning into an electron using a dataset ten thousand times larger than the one used in a similar previous experiment. The future of the question of lepton flavor is fascinating, and hopefully, we will solve this mystery of the standard model very soon.