CMS: A hunter of Super-Leptons 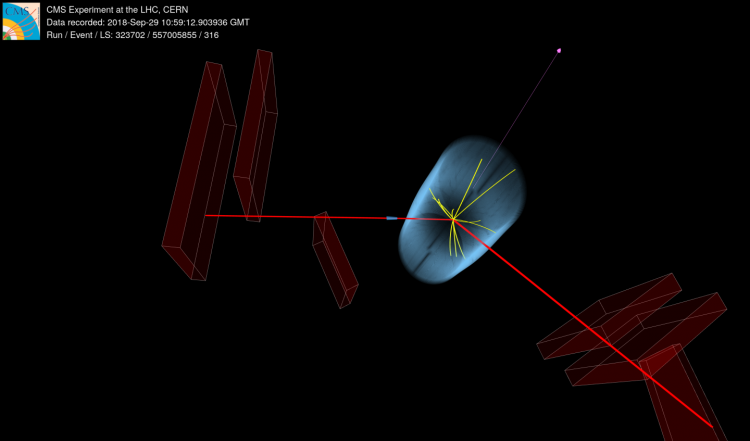 A candidate collision recorded by CMS, containing two muons (red) and significant momentum imbalance in the direction away from the LHC beam(magenta).

The Standard Model of Particle Physics is the theory that physicists use to describe elementary particles’ fundamental interactions. The Standard Model was developed over many decades. It has been able to predict experimental observations with remarkable accuracy, including the existence of the Higgs boson, discovered at the Large Hadron Collider (LHC) back in 2012.

What the Standard Model can not explain, such as the existence of dark matter and the fact that the particles have different masses and different strengths, is what physicists explain with physics beyond the Standard Model. There are many physics theories beyond the Standard Model; one of those carries the name of Supersymmetry (SUSY). SUSY predicts that for each elementary particle of the Standard Model, a supersymmetric partner particle exists, only differing from the former because of its spin and mass. For SUSY to correctly describe the experimental observations of the last few decades, it actually must consist of a spontaneously broken symmetry, thus allowing partner particles to differ in mass too.

At CMS, we used the data collected in 2016, 2017, and 2018, during the LHC Run 2 (corresponding to approximately ten millions of billions of proton-proton collisions), to hunt for the SUSY partners of the Standard Model leptons: our super-leptons. Indeed, SUSY predicts that pairs of super-leptons may be produced in proton-proton collisions. However, it also calculates the probability for this to happen (a number called the production cross section), and that number is very low: super-leptons may have only been made a handful of times in the three years of collisions that make up LHC Run 2, which makes our hunt particularly challenging. Each super-lepton would then decay to its Standard Model partner (a Standard Model lepton) and the lightest SUSY particle (LSP). The LSP is expected to be massive, electrically neutral, and not interacting much with other particles. This makes the lightest SUSY particle an ideal candidate for dark matter, the unexplained one-quarter of all of the Universe, whose presence is not explained by the Standard Model.

As the lightest SUSY particle does not interact with matter, the LSP would escape the CMS detector undetected. But through the principles of conservation of energy and momentum, physicists can infer the presence of undetected particles. When an energetic particle goes undetected, then a significant imbalance in the energy and momentum of all other particles will be visible in the detector. On the other hand, particles from the Standard Model like leptons, are friendly particles in a hadron collider experiment: when they travel through the detector, they produce a unique, well-understood and clean signature that allows us to identify them quite effectively, distinguishing them from other particles, especially from hadrons. Hadrons are produced at a huge rate in proton-proton collisions; when quarks and gluons are made in a collision, they interact with each other forming streams (jets) of hadrons.

While hunting for super-leptons, CMS physicists select collisions containing pairs of leptons, little energy from jets, and significant momentum imbalance. Unfortunately, collisions with similar properties are commonly produced also within the Standard Model: for instance, pairs of leptons may arise from decays of Z bosons, while the presence of neutrinos (from decays of Z or W bosons) may give rise to significant momentum imbalance. Collisions from Standard Model sources are what we call background. On the other hand, any collisions that would hypothetically come from SUSY are our signal. If present, the signal would show up as an excess of collisions over the predicted Standard Model background. 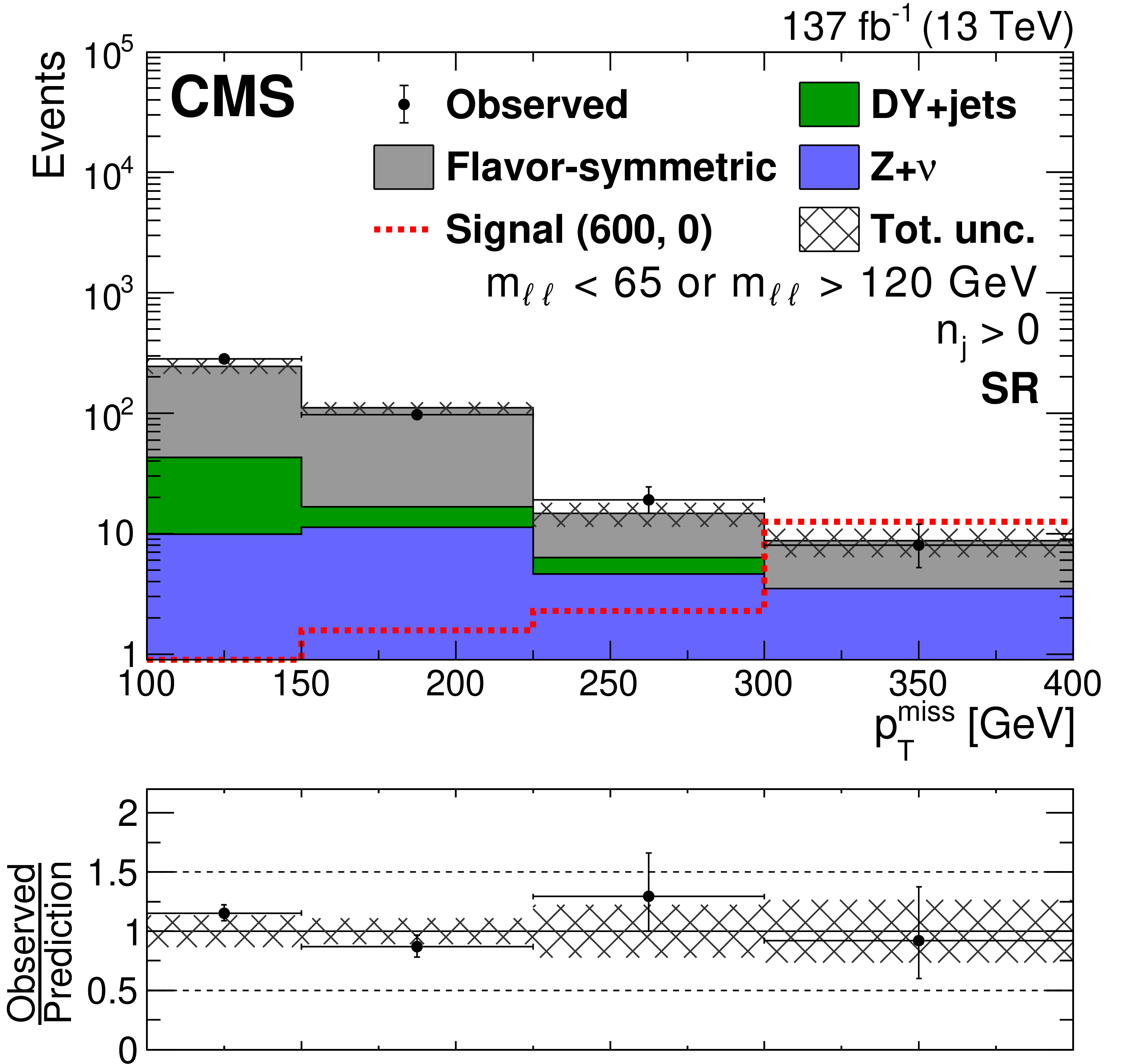 Figure 1: The magnitude of the transverse momentum imbalance in observed data (black points) and predictions of the total Standard Model background (classified by source for different colors grey, green and blue). The expected signal for a particular super-lepton and LSP mass hypothesis is shown as a red dotted line. The lower part of the figure compares the observed data to the background prediction.

Figure 1 compares the observed number of collisions and the Standard Model background predictions as a function of the momentum imbalance, showing the number of signal collisions the CMS experiment would detect for a particular super-lepton and LSP mass hypothesis. Observed data and background predictions are in good agreement, with no statistically significant excess. This means that there is no sign of super-leptons in the data collected so far. But not seeing super-leptons makes this result still important: indeed, based upon these results, we can significantly narrow down the many possible SUSY scenarios, the existence of sleptons with mass below 700 GeV is not favoured by the data. With this new result in mind, particle physicists know better what to look for in the next hunt for physics beyond the Standard Model!

While our hunt for supersymmetric leptons using the data collected over the past three years didn't yield any statistically significant excess, CMS physicists were able to use these results to pinpoint better where we can find these leptons in the future. In 2022, the hunt for super-leptons will continue in Run 3, and a final word will only be possible using the high luminosity LHC with 20 times more data collected up to 2038.