CMS sees evidence for the Higgs boson decaying into muons

A proton-proton collision event at center-of-mass energy 13 TeV, collected by the CMS experiment in 2018, in which a candidate Higgs boson produced via the gluon fusion mode decays into a pair of muons, indicated by the red lines. 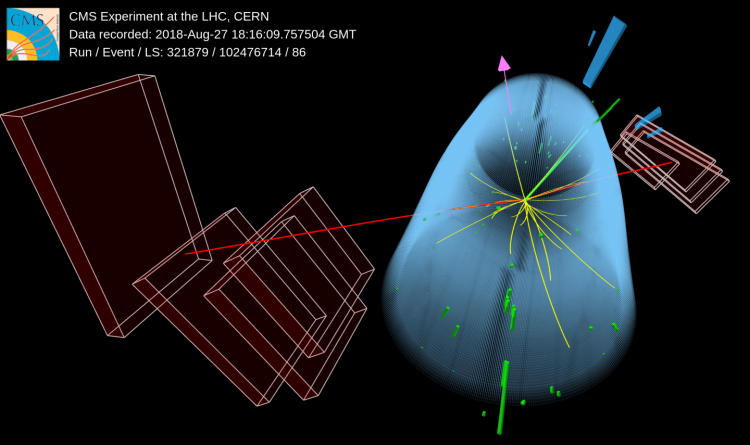 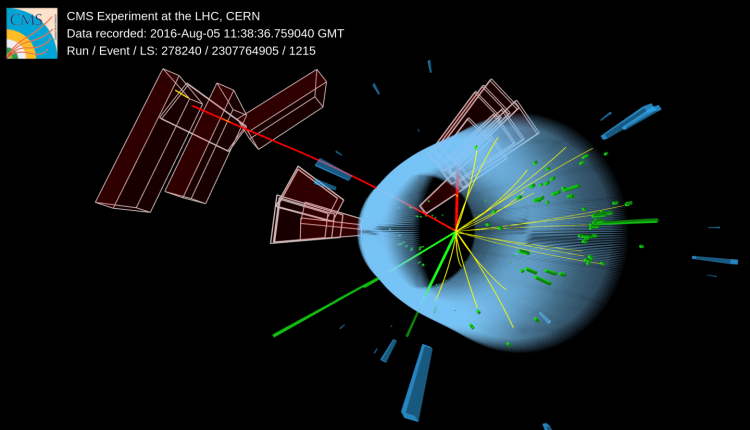 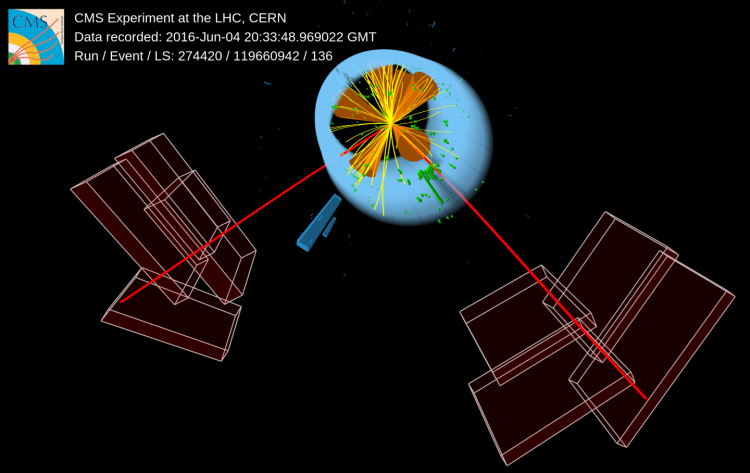 Event in which a candidate Higgs boson, produced in association with a pair of top quarks. 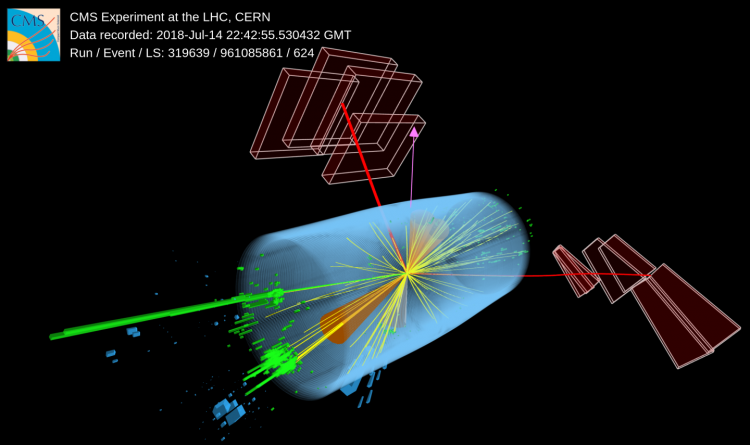 Event in which a candidate Higgs boson produced by vector boson fusion (VBF).

A new result released by the CMS Collaboration presents the first evidence of the Higgs boson interacting with the muon.

To put it differently, why the Higgs field coupling strength is different for each particle is still a mystery and not explained by the standard model. This puzzle is particularly relevant as the electrons, quarks, neutrinos, etc., in the standard model can be ordered according to their mass into three groups, called generations. The reason why there are three generations is also not known. It is therefore vital to measure the difference between different generations and test if the standard model is indeed describing the way these particles behave.

Besides its world-class muon detectors, the CMS detector uses a tracking system to measure the trajectories of charged particles with high precision. The tracking system measures muons as they pass through the very strong (3.8 Tesla) magnetic field, that is about 100000 times stronger than the earth's magnetic field. The CMS detector reconstructs a typical muon produced in an LHC collision within 1-2% of its true momentum and with very high efficiency. These extraordinary reconstruction capabilities have made it possible for the CMS Collaboration to report the first evidence for the Higgs field's meager interaction with muons.

The measurement sensitivity has been improved significantly compared to previous results. Four separate analyses were necessary to identify candidate signal events from the different modes by which Higgs bosons can be produced. The background prediction strategy includes sophisticated machine learning techniques like deep neural networks that help to differentiate the signal from the substantial background. The characteristic expected signature of the Higgs boson decay to muons is a small excess of events in the invariant mass of muon pairs near the Higgs boson mass of 125 GeV. Figure 1: The Higgs boson candidate invariant mass distribution for the weighted sum of all event categories. In the lower panel, which subtracts the predicted background from the data, an excess of events is observed in data that is consistent with the Higgs boson decaying to a pair of muons, indicated by the red line.

Figure 1 shows the number of collisions for different values of the dimuon mass, where for each mass the number of collisions is counted. The Z boson background dominates and decreases going from smaller to larger masses. The tiny contribution of the Higgs boson decay to muons is invisible in the upper panel but indicated by the red line in the lower panel, which shows the distribution when the background is removed. An excess of events over the predicted background is visible in data, and the yield is consistent with the prediction for the Higgs boson decay to muons. Figure 2 displays the probability that the observed CMS data can be explained without there being a Higgs boson decaying to muons. If that probability is small this means the data is consistent with the signal. For a Higgs boson mass of 125.38 GeV, corresponding to the most precisely measured value to date, the probability that a statistical fluctuation can explain the observed signal is less than 1 in 700. Figure 2: The consistency of the observed data with the absence of signal (p-value) as a function of the considered Higgs boson mass hypothesis. For a Higgs boson mass of 125.38 GeV, corresponding to the most precisely measured value to date, the probability that a statistical fluctuation can explain the observed signal is less than 1 in 700. Figure 3: A summary of the CMS measurements of the Higgs boson couplings to the other fundamental particles, with the predictions by the standard model indicated by the dashed black line. In the lower panel, the ratio between the measured coupling and the standard model prediction is shown. This new CMS result presents the first measurement of the Higgs boson coupling to the muon, indicated by the left-most data point.

Although the muon measurement in Figure 3 is consistent with the blue line of the standard model, there are still substantial uncertainties. Because the Higgs boson decay to muons is so rare, the precision of this measurement is limited mainly by the amount of data collected so far. The quantity of accumulated data is expected to double from the upcoming Run-3 of the LHC, allowing for an improvement in the precision of this vital measurement in the next years. In the longer term, the unparalleled data quantities anticipated from the High-Luminosity LHC will enable the high-precision measurement of this interaction, one of the key milestones of the LHC physics program in the years to come.