Crack in the Mirror

Have you ever pondered what happened to our Universe after the Big Bang? When the Universe was created, each particle was produced together with its antiparticle. For example, for each electron we see now, there was a positron created. But, some 13 billion years after the Big Bang, why our Universe is mainly made of matter with so little antimatter left? Scientists believe that the fate of the Universe was sealed due to a mechanism known as "CP violation".

When one looks in a mirror, the person on the other side is not exactly the same: if one holds a book in the right hand, the mirror image has a book in the left hand. Now, imagine that a person in the mirror does not hold a book at all! In particle physics, this is known as "parity violation", or "P violation" in short. Discovered in the late 1950ies, it helped to explain the mysterious properties of some of the elementary particles, such as neutrinos.

For a while, scientists believed that if one combines the mirror image with another "mirror" that turns a particle into its antiparticle (known as "charge conjugation", or "C" in short), the perfection is restored, and the "CP mirror" image of a particle looks (and behaves) exactly like the particle itself. More precisely, the laws of physics in the CP-mirrored world are exactly the same as those in our own. However, in 1964 an experiment used neutral kaons (the so-called "strange particles", containing a strange quark) to prove that the CP mirror has a crack in it, and that the image seen in this mirror is a tiny bit different from the particle itself. This "CP violation" is a key principle that is needed to explain why there is almost no antimatter left in the Universe -  somehow part of it must have "leaked" through the crack in the mirror and became ordinary matter, causing the matter-antimatter imbalance we now observe.

While CP violation can in principle explain how antimatter turns into matter, the answer is clearly not complete. The crack in the mirror discovered in 1964 was later observed also for other types of particles, but is not large enough to explain why nearly all the antimatter in the Universe has disappeared. Nevertheless, if some heavy, yet unknown particles also violate CP, the crack may widen, making it just big enough to explain our Universe.

The CMS collaboration just made a step forward in solving this ultimate puzzle. In a new measurement, CMS scientists used a heavy cousin of the neutral kaon, a particle known as B0s meson, combining the beauty (b antiquark) and the strangeness (s quark). Being quite heavy (some ten times heavier than a kaon), this particle is expected to be more sensitive to the possible presence of new heavy particles, which may change the image of the B0s meson seen in the CP mirror.

Once produced, the B0s meson quickly disintegrates into lighter particles. For this measurement, a very special decay was chosen, namely into J/ψ and ϕ mesons. Both J/ψ and ϕ are also short-lived and decay to even lighter particles. The J/ψ meson is detected through its decay to a pair of oppositely charged muons, while the ϕ particle is observed via its decay to a pair of charged kaons (K+K-). The interesting fact about this decay is that both J/ψ and ϕ are their own antiparticles, which means that both the B0s meson and its antiparticle, anti-B0s meson, are allowed to decay into them. Even more bizarre is that the B0s meson spontaeously turns into an anti-B0s meson and back, in a quantum phenomenon known as "oscillations" or "B0s anti-B0s mixing". By observing the tiny differences between the way B0s and anti-B0s eventually decay into J/ψ ϕ, one could study the oscillations and look for cracks in the CP mirror.

But how do we know if a B0s or an anti-B0s was produced, when the particles created in the disintegration are exactly the same in both cases? This is done using a clever technique known as "flavor tagging". At the LHC, b quarks are mostly produced in quark-antiquark pairs. This is similar to the way matter and antimatter were produced together during the Big Bang. Whenever a B0s is produced, using up the b antiquark in the pair, we can then be sure that a particle containing a b quark must be around as well. Similarly, if anti-B0s, containing the b quark, is produced, there also will be a particle containing a b antiquark. It turns out that particles containing b quarks often decay with an emission of a negatively charged muon (μ-), as illustrated in Figure 1, while the ones with a b antiquark usually emit a positively charged muon (μ+). So, by looking for an additional muon coming from the other particle produced along with the one we study, we can tell from its charge whether the J/ψ and ϕ came from a B0s meson, or its antiparticle.

Figure 1: Schematic representation of a production of B0s meson, together with another particle containing a beauty quark, which is used to "tag" the event.

In reality, flavor tagging is much more complicated than the simple picture shown in Figure 1. For example, it is possible that the particle used for tagging also changes into its antiparticle (just like B0s could turn into anti-B0s). When the antiparticle decays, a positive muon is usually emitted, which results in a mistake in tagging.

To improve the tagging of B0s vs. anti-B0s, CMS physicists relied on machine learning. By feeding millions of simulated collisions with B0s or anti-B0s mesons produced into a computer, one could "teach" the tagger how likely it is for the muon charge to give the right decision. Other event features are used for this, for example how close that muon is to other particles produced in the same collision, or how far from the interaction point it was emitted. As a result of this sophisticated computer algorithm, the performance of the tagger is improved significantly. An example of an event where the tagger indicated that an anti-B0s meson was produced, is shown in Figure 2.

Figure 2: Display of a J/ψ ϕ event produced in an LHC collision and reconstructed in the CMS detector. The muons are shown as red lines crossing the CMS muon detector layers. The two charged kaons from the ϕ decay are "hidden" within the yellow firework of charged particles observed in the central tracker of CMS 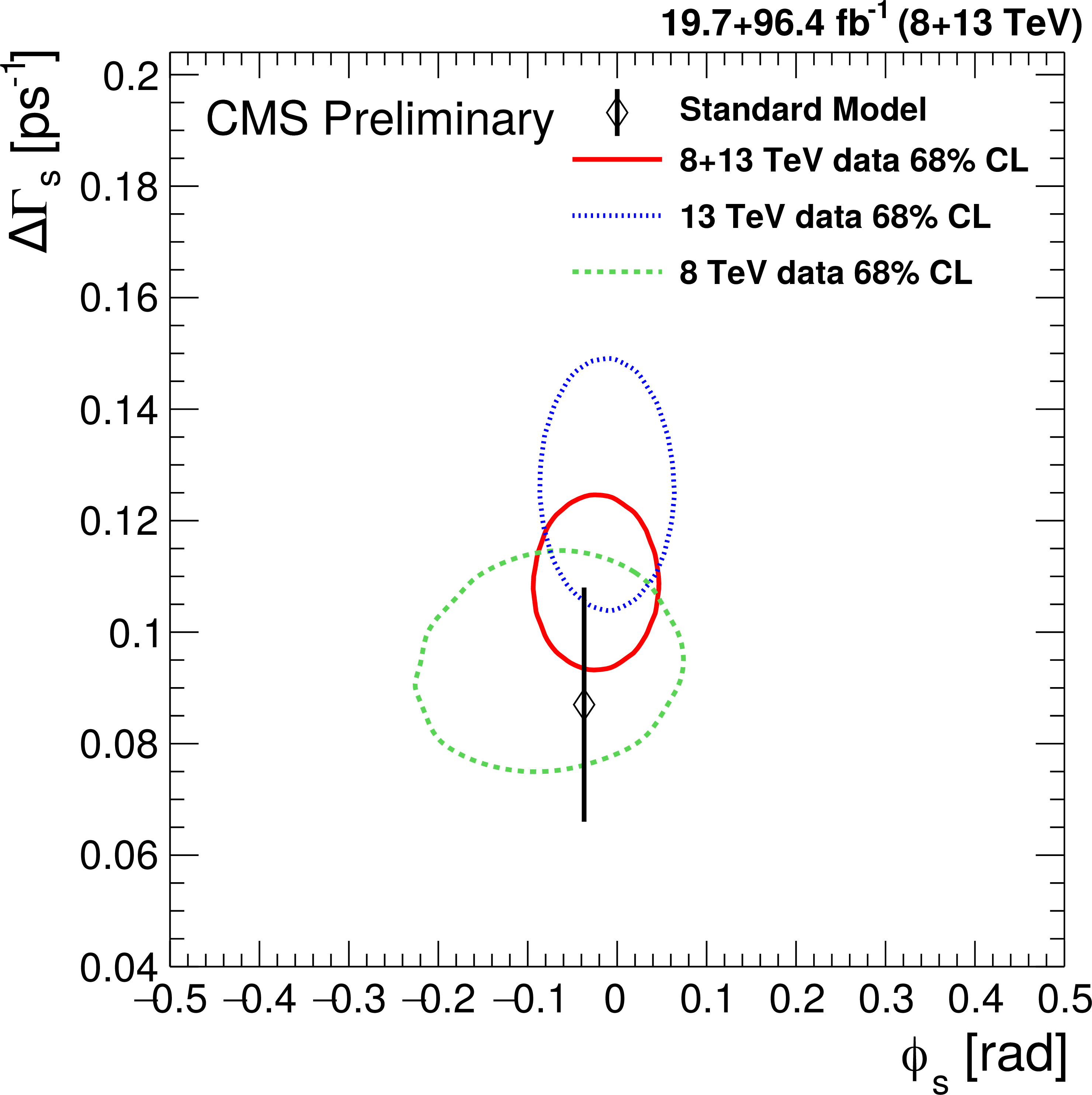 Figure 3: The measured values of the ϕs and ΔΓs parameters related to the CP violation and mixing in B0s decays. The latest results are shown in blue, the previous results in green, and the combined results in red. The theoretical predictions are represented by the diamond marker.

By putting together the excellent performance of the CMS detector and advanced machine learning techniques, CMS was able to measure CP violation and mixing in B0s decays with twice the precision of its previous result. This new result is shown in Figure 3, which compares the earlier CMS measurement labeled "8 TeV" with the new one, labeled "13 TeV" and with the combination of the two. The two axes of the plot show two important parameters that physicists use to characterize the CP violation strength and the B0s mixing. The new result complements the earlier studies of CP violation in this decay done by the CDF and D0 Collaborations at the Fermilab Tevatron collider (now decommissioned) and the ATLAS and LHCb Collaborations at the LHC.

While the new measurement is in agreement with the theoretical expectations that do not involve new particles, it is an important milestone on the way to reaching an even higher precision. The planned restart of the LHC and CMS next year will allow us to accumulate more data, needed to observe the tiny crack in the CP mirror, and to see if it may be wider than we think!