Tau leptons are the heavy siblings of muons and electrons, being respectively 170 and 3500 times more massive. Leptons are not sensitive to strong interaction. The tau leptons are however so massive (about 1.8 times heavier than the proton) that they decay before we can measure them directly. The average lifetime of a tau lepton is less than one third of a pico (that is millionth of a millionth) second. Further, they decay not only to electrons or muons, but also to a varied number of charged and neutral pions. The neutral pions, in turn, decay immediately to two photons, which we can detect with our electromagnetic calorimeter, whereas we measure the charged pion tracks with the tracking detector before it is absorbed by the hadronic calorimeter. Quantum laws dictate also that tau lepton decays must always include neutrinos, which as weakly interacting particles leave the detector without a trace. All this information is combined to assess the production, properties and passage of the tau lepton in a detector. 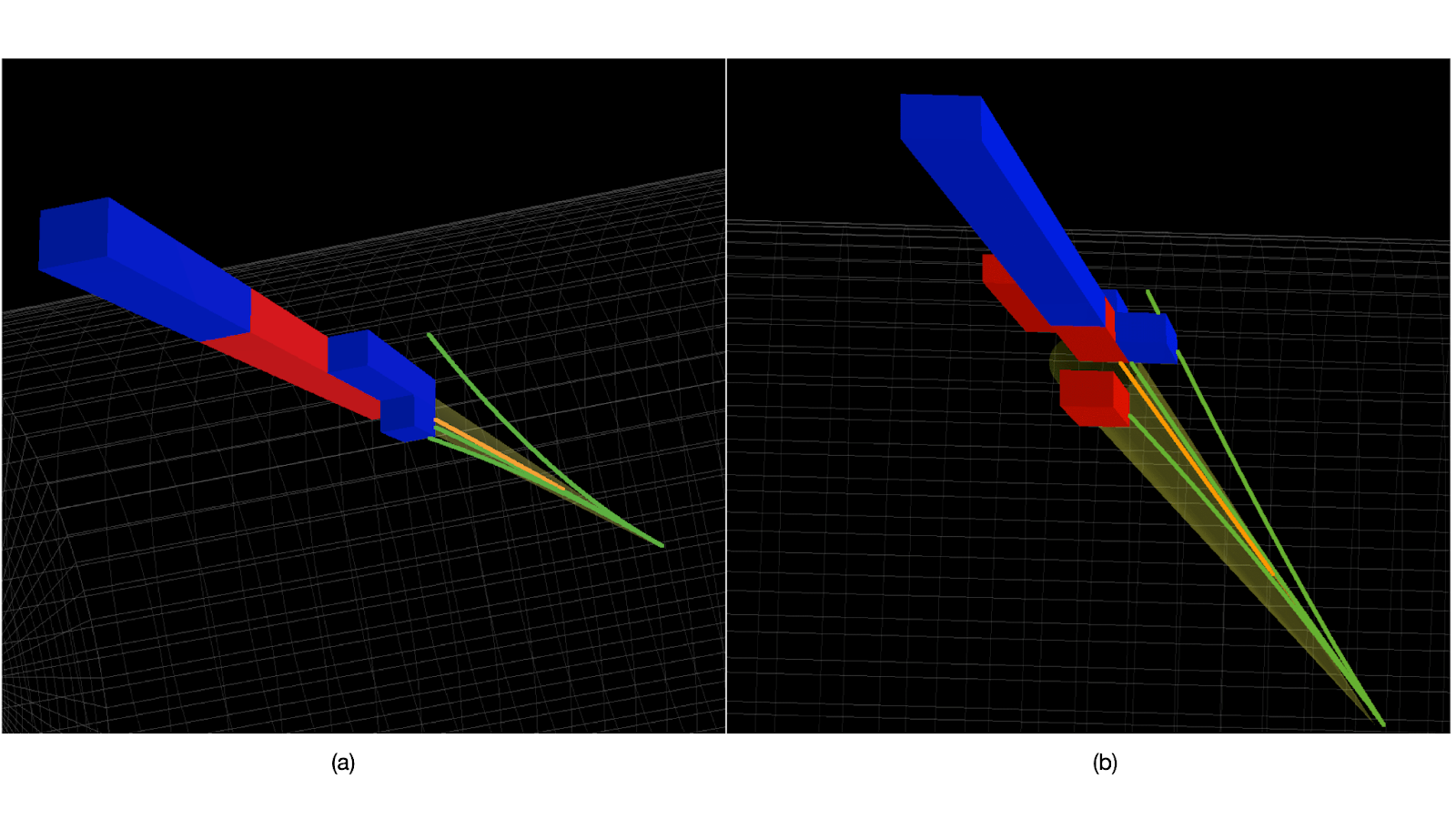 Figure 1: (a) Visual representation of a hadronic tau lepton decay (into three charged pions and a neutral pion) in the CMS detector. The neutral pion decays to two photons which lose their energies in the electromagnetic calorimeter (red block), while the charged pions leave tracks (green) in the tracking system, before being absorbed in the hadronic calorimeter (blue block). Combining all information, the potential passage of the tau lepton is indicated by an orange line. (b) Visual representation of a jet in the CMS detector originating from a quark or gluon, resembling a tau lepton.

At the LHC, the production and decay of tau leptons hold the key for numerous highly interesting measurements, be it for studying properties of the Higgs boson or in searches for physics beyond the standard model, eg., the decay of the observed Higgs boson to tau leptons is a key measurement to understand the intercation between the Higgs boson with matter particles. As indicated above, the identification and complete measurement of tau decays are highly non-trivial. If it is a hadronic decay, which is almost twice as abundant as the two leptonic decays, there is an additional complexity. At the LHC, quark- or gluon-induced jets are produced in other processes much more copiously, and often mimic the experimental signature of a tau decay. Indeed, quarks or gluons are known to never live alone, and if sufficiently energetic, produce a shower of particles or jets. Figure 1(a) shows the simulated decay of a tau lepton into three charged and one neutral pion. Compare this with the reconstructed jet, shown in Figure 1(b) that could also be held for a hadronic decay of tau lepton.

To overcome these challenges, the CMS experiment has employed an artificial intelligence technique, a neural network, to identify hadronically decaying taus. Neural networks have been widely used in particle physics for decades. The special feature of this setup is to employ a deep learning technique, used in computer vision tasks, which is very efficient to recognize patterns in images. It combines fully connected layers, where all input nodes affect the output nodes, with convolutional layers where a set of sub-networks  is repeatedly applied on the partial outputs of the previous layer. The technique uses information from all reconstructed particles in the vicinity of the tau lepton and identifies precisely the tau decay products, after disentangling them from other collimated particles. By using multiple sub-networks, the training is able to classify four hypotheses to explain the possible signatures in the detector: electron, muon, tau, and jet. Subsequently these can be combined to define discriminators to identify the tau decays. To achieve this training, 140 million simulated tau leptons, electrons, muons, and quark- or gluon-induced jets were used.

Thanks to this new algorithm, called DeepTau, the tau identification performance in CMS data analyses has increased by 10-30% for a given rejection rate of quark- and gluon-induced jets, and by about 15% for a given rejection rate of electrons, compared to the previous algorithm! Moreover, the technique has been calibrated sufficiently to make it highly reliable. The CMS experiment, therefore, plans to deploy this method online for real time event selection for the next operation of the LHC (Run 3) which is imminent. This will certainly make the data taking strategy more powerful and open up capabilities for interesting physics.