Does the behaviour of the Higgs boson match the expectations?

The standard model of particle physics is our current best theory to describe the most basic building blocks of the universe, the elementary particles, and the interactions among them. At the heart of the standard model is a hypothesis describing how all the elementary particles acquire mass. Importantly, this scheme also envisages the existence of a new type of particle, called the Higgs boson.  It took nearly 50 years, since its postulation, to observe the Higgs boson at the LHC experiments at CERN. It is strongly believed that the Higgs boson, the only scalar particle known to date, is a key to answer some of the questions that standard model cannot answer. Thus a detailed study of the properties of the Higgs boson is the order of the day. Often, specially at the LHC, one of the essential observables concerns the probability that a certain unstable particle is produced momentarily, albeit obeying the laws of nature. In experiments this production cross section is estimated using a specific decay final state of this transient particle in terms of the number of events over a given amount of time. The standard model predicts the cross section for the Higgs boson production as well as the decay rates very precisely. The frequency distribution of a given type of event, as a function of some of the measured variables in the experiment, helps us understand better various aspects of the interactions involved; they are typically lost in the summed or total cross section. Hence measurement of this differential cross section is a powerful tool to vindicate the standard model; also any deviation from the standard model predictions in data would indicate presence of a New Physics.

The Higgs boson is roughly about 125 times more massive than a proton and decays to lighter particles including cascade processes in some cases. Physicists typically use the signatures of stable particles in the detector to trace back suitable decay chains of the Higgs boson. The tau lepton is the heaviest lepton known so far, and as such it is the lepton with strongest ties to the Higgs boson. The probability of a Higgs boson decaying to a pair of tau leptons is reasonably high (about 6%), when compared, for example, to a pair of muons (about 0.02%). But the tau lepton is also an unstable particle and decays quickly to lighter particles always accompanied by its partner, the tau neutrino. Often the decay products from the tau lepton are hadrons producing a shower of particles or jet in the calorimeter system. The tau neutrino goes undetected affecting the accuracy of measurement of the tau lepton energy. It is interesting to study the detailed characteristics of the Higgs boson events using the decay to tau leptons which possess a rest mass of only about 1.4% that of the parent.

A recent study from the CMS Collaboration, focuses on the events where the Higgs boson decays into a pair of tau leptons using data collected by the experiment between 2016 and 2018. The analysis measures the Higgs boson production cross section as a function of three key variables: the Higgs boson momentum in the direction transverse to the beam, the number of jets produced along with the Higgs boson, and the transverse momentum of the leading jet. New Physics could manifest in excess of events in the frequency distribution of these variables when compared with the standard model predictions.

The analysis employs deep neural networks to exploit simultaneously a variety of tau lepton properties for identifying them with high efficiency. Eventually, to ensure that the selected tau lepton pair is produced from the decay of the Higgs boson and discard those from other processes, such as Z boson decay, the mass of the selected tau pair (m𝝉𝝉 ) is scrutinized. Reconstruction of m𝝉𝝉 , after taking into account the neutrinos involved in the decay as mentioned earlier, required a dedicated algorithm which computes, for each event, a  likelihood function P(m𝝉𝝉) to quantify the level of compatibility of a Higgs boson process.

Figure 1: An interactive event display (try zooming/rotating!) of a 13 TeV proton-proton collision in the CMS detector during 2018 producing signal of interest. The event is characterized by the production of a pair of forward-backward jets (two yellow cones). Each tau lepton decays to a charged hadron and a neutrino. The tau jets (orange cones) in this event are identified by having a single track and a corresponding deposit in the Electromagnetic (green towers) and Hadronic (blue towers) calorimeter systems. View the interactive event display on this separate page.

The Higgs boson typically has more transverse momentum or boost when produced in conjunction with jet(s), compared to the case when it is produced singly. One such event, collected by the CMS detector in 2018 and shown in Figure 1, could correspond to such a boosted Higgs boson decaying to two tau leptons which, in turn, decay hadronically. However, several other less interesting processes could also be the cause of such an event and pose as backgrounds. Such contributions have been measured mostly from the data itself by carefully studying the properties of the jets. Figure 2 shows the good agreement in the m𝝉𝝉 distribution between the prediction and data collected by the CMS experiment for the events with the transverse momentum of the Higgs boson below 45 GeV. The contribution from the Higgs boson process is hardly noticeable due to the overwhelming background.  On the other hand, Figure 3 presents m𝝉𝝉 distribution for the events with highly boosted Higgs boson, when its transverse momentum is above 450 GeV.  Selecting only events with high boost reduces a lot the total number of available events, but  the fraction of the signal events in the collected sample is significantly improved. The data agrees with the sum of predicted contributions from the Higgs boson and all the standard model background processes. 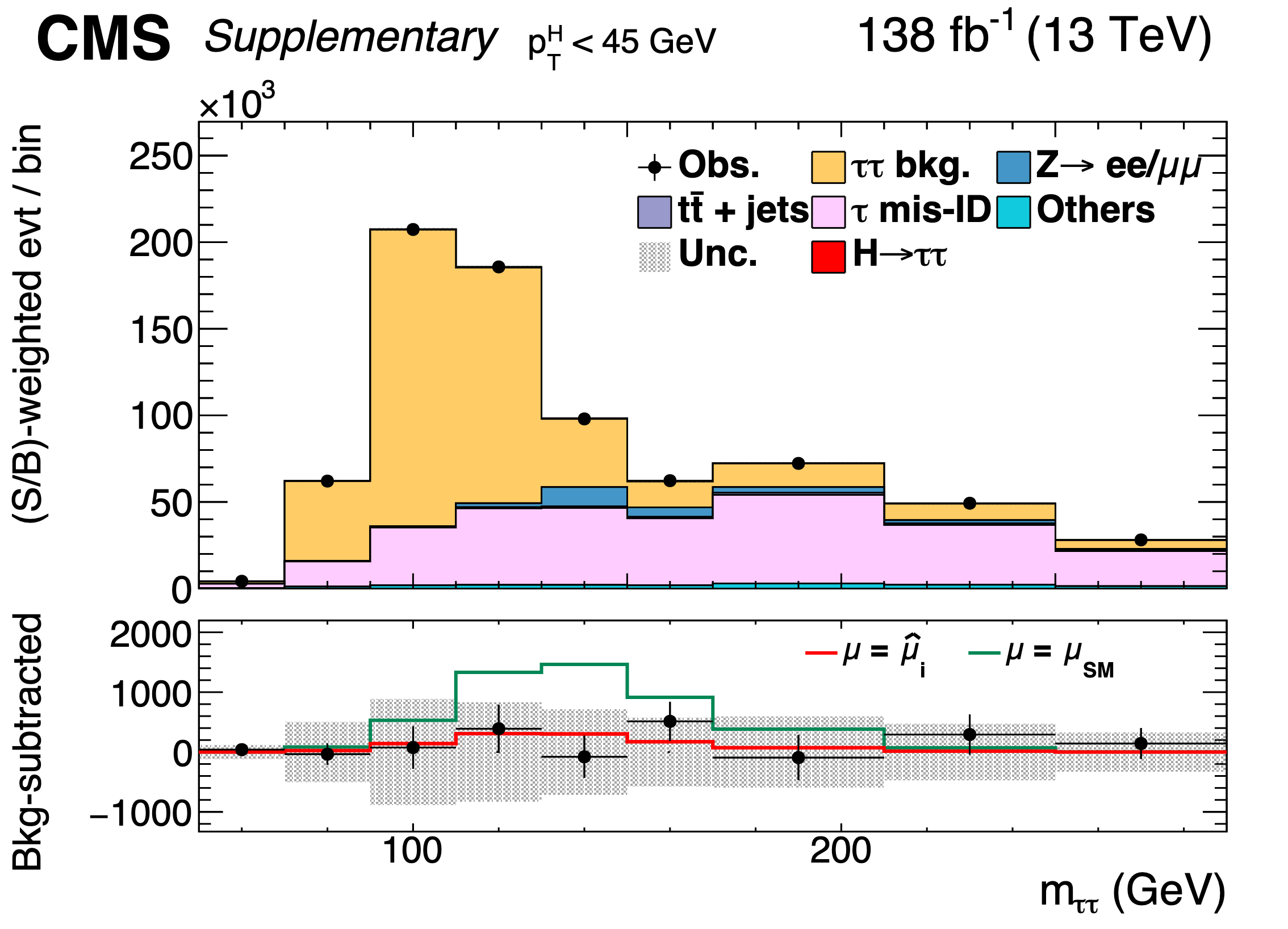 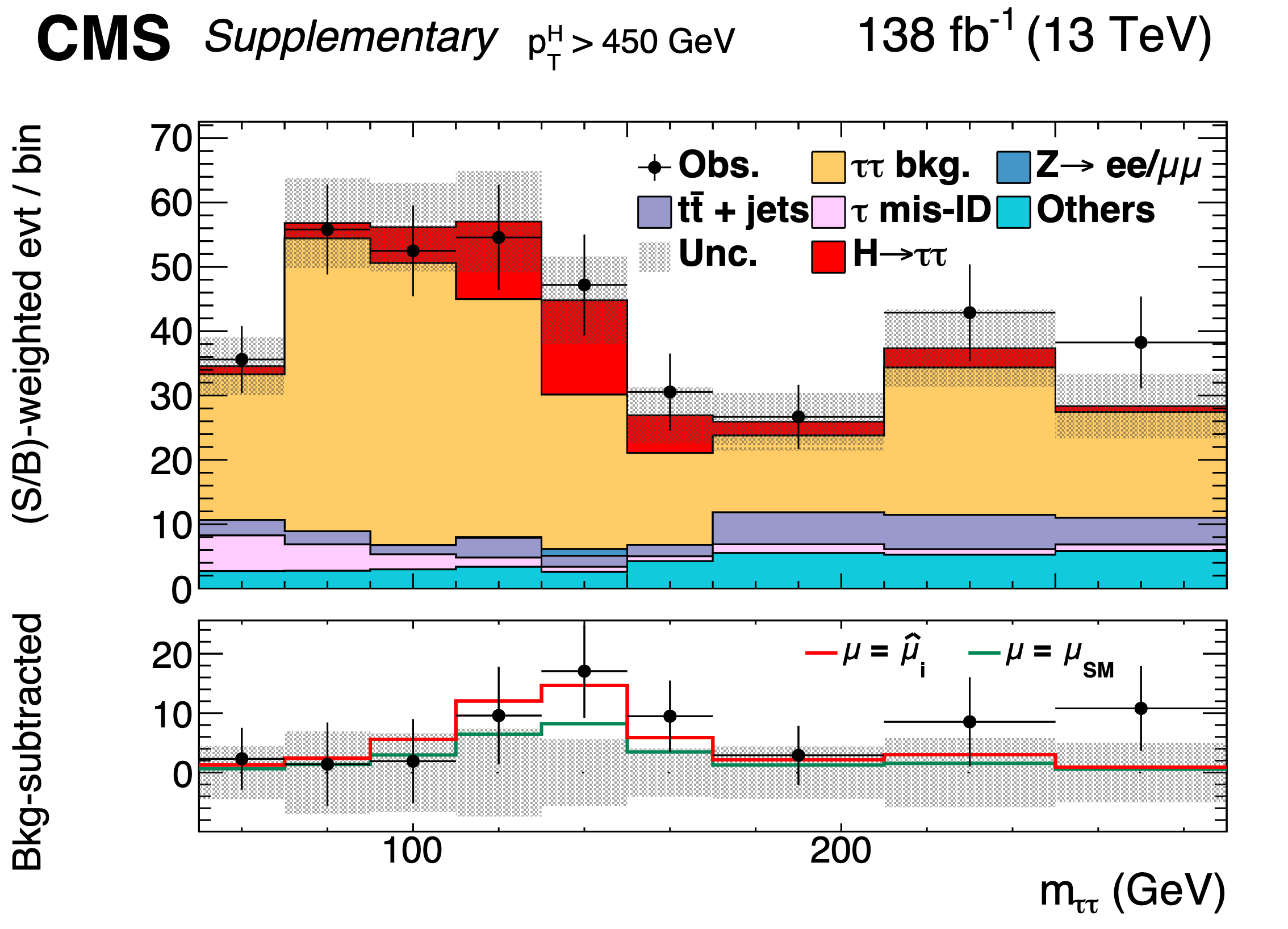 Figure 3: Observed and expected distribution for boosted Higgs boson (transverse momentum beyond 450 GeV). Histograms in different colours represent predicted contributions by different processes including the Higgs boson production (filled red histogram) and the black points with errors represent measured data. The lower panel displays the distribution after the estimated total background contribution has been subtracted. The broad excess of observed events above the background can only be explained by the hypothesis of the Higgs boson production followed by its decay to tau lepton pair (red line).

This CMS result presents the first-ever measurement of the differential cross sections for the Higgs boson production decaying to a pair of tau leptons. Run 2 data is allowing us to scrutinize the Higgs boson in the tau lepton decay channel which was only observed a few years back. Future comparison and combination of all Higgs boson decay modes will offer better insights on the interactions of the Higgs boson to different standard model particles. But the story does not end here! The Run 3 of the LHC machine is just around the corner and looking into the future, the high luminosity operation (the HL-LHC) will offer a huge increase in data volume. That could perhaps provide hints of the question if the discovered Higgs boson is the one as predicted by the standard model or if there is any new interaction depicting another fundamental particle contributing to such measurements. That will indeed point to New Physics!