Does the top quark respect all the leptons equally? 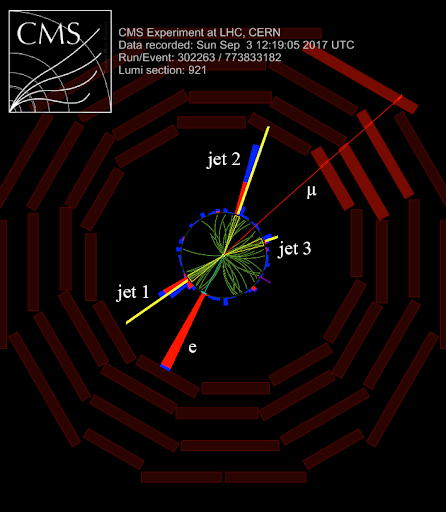 The word lepton comes from the Greek λεπτός (leptós,) meaning “small”;  the electrically charged leptons (electrons, muons, and taus) have much smaller masses than their counterparts in the quark sector. For example, the tau particle is the heaviest lepton, belonging to the 3rd generation, and has a mass of about 1.8 GeV (1 GeV is roughly the mass of a proton).  Compare this with the 3rd generation quark masses; the bottom is about 4.5 GeV and the top quark is about 173 GeV! In the simplest description of the standard model, neutrinos are the neutral partners of the charged leptons and they are massless. Moreover, it also appears that the lepton flavour is conserved or remains the same before and after any fundamental interaction. Thus one always finds, for example, an electron pairing up with an electron-type anti-neutrino or the positron, its antiparticle, but never with a any other type of lepton. This ensures the number of “electron-type” particles before and after an interaction remains the same.

In recent decades, the experimental discovery of neutrino oscillations proved that the neutrinos do have masses, albeit extremely small compared to other fundamental particles known today. Due to this, a neutrino of one flavour converts into a different flavour, causing the number of each type of neutrino not to be conserved! Thus the notion of lepton flavour conservation does not hold in the neutral lepton sector. Furthermore, this phenomenon can also induce charged lepton flavour violating processes but with extremely low rates. Though no such processes have been observed experimentally thus far, there is no compelling reason for the charged lepton flavour to be conserved either. Searches for lepton flavour violating processes are a good probe for the as-yet-unknown physics involving new particles or forces at much higher energy scales than we can reach at the LHC. Interestingly, results from the LHCb experiment at CERN already indicate that charged lepton flavour conservation may be violated in certain decays of the bottom quark! However, there is nothing special about the bottom quark alone! Take the top quark, the heaviest known fundamental particle to date. They are produced in multitudes (almost 10 per second) at the LHC and paves the way to look for possible lepton flavour violation in their production or decay.

In a recent analysis by scientists in the CMS Collaboration, several possibilities for lepton flavour non-conservation, though not allowed in the standard model, have been considered. Some of these are depicted in Figure 1 via cartoons; the red dots indicate the unusual interactions leading to production (first two diagrams) or decay (3rd diagram) of top quarks ensuing changes in the individual lepton numbers of electron and muon varieties.

Figure 1: Cartoons representing possible ways in which new interactions, represented by red circles, could modify the production and the decay of top quarks. Here, time flows from left to right, and arrows show the direction of the particle momentum. The left two diagrams show collisions between fundamental constituents of the proton, a gluon, and an up or charm quark. In both cases, a single top quark and an electron-muon pair are produced. The third diagram shows two gluons colliding to form a top anti-top quark pair. One of the top quarks decays in a new way to an up or charm quark and an electron-muon pair.

An event recorded by the CMS detector such as the one shown in Figure 2 potentially corresponds to the prized situation discussed above. The scientists have looked into the proton-proton collision data collected by the experiment from 2016 to 2018 for possible hints of individual lepton number non-conservation. They employed a particular type of machine learning, called the boosted decision tree, to distinguish the unusual events with lepton flavour violation from those with the normal behaviour of the top quark.

Figure 2. Computer-assisted reconstruction of a collision event in the CMS experiment that could be from an anomalous lepton flavour violating top quark interaction. The interactive display (try zooming/rotating or on this separate page ) of the event indicates the energetic particles emanating from the proton-proton collision point at the center. The properties of the electron (green track followed by a thin green block), the muon (red track) and the three  jets (yellow cones followed by green and blue blocks) are studied in detail. 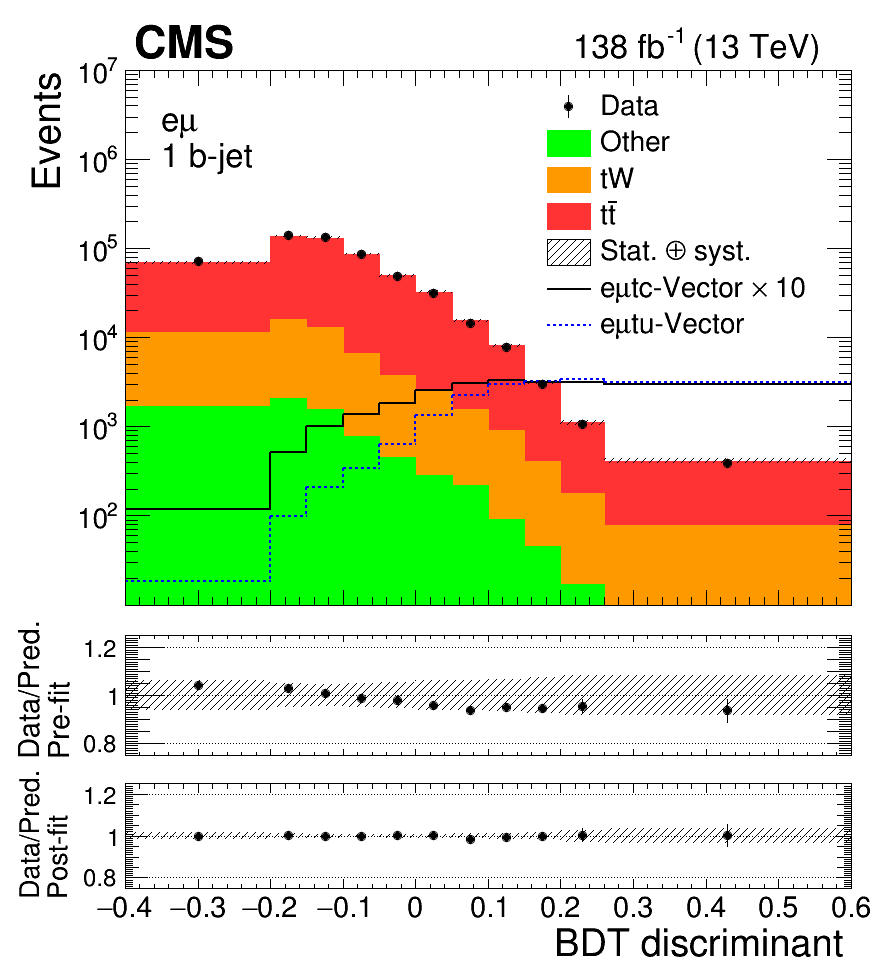 Figure 3: Distribution of the score for a boosted decision tree ("BDT", this is a type of artificial intelligence algorithm) in events containing an electron, a muon, and a b jet. Data are compared with predictions from the standard model (stack plot of expectations from different sources) as well as 2 models. incorporating violation of lepton flavour conservation.

The score value provided by the discriminator for every event was studied. The distribution of this value is shown in Figure 3 for observed data (black points) where the events contain an electron, a muon and a jet originating from b quark. It is compared with the expectations from simulation (histograms) of various processes of the standard model which mimic the experimental signature. The figure also demonstrates how the score distribution corresponding to the lepton flavour violating signal processes might appear, as predicted in a certain prediction of physics beyond the standard model and indicated by the dashed lines. A charged lepton number violating process would significantly change the shape of the distribution in the number of high score events. The lower panel shows the ratio of the data to the total prediction from the standard model for each bin of the score. Obviously, the data do not support any contribution from the charged lepton flavour violating interactions in addition to the standard model, which would have shown up as an excess at the higher end of the distribution. This result is used to set limits on the strength of such processes.