Exit through the microscopic gift shop 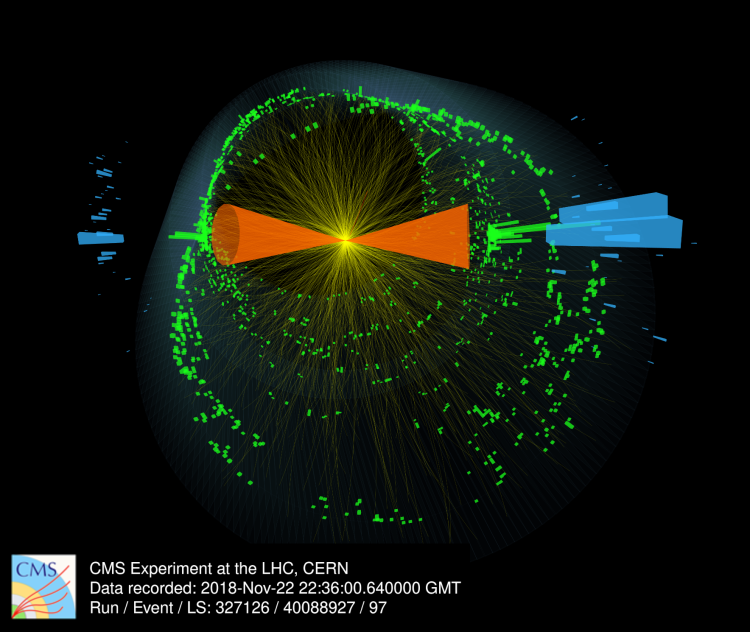 Imagine you are at a museum. After a long day admiring the exhibitions, you are exiting the museum. But to be able to get out, you will need to exit through the gift shop. The layout of the gift shop can be set up in several ways. Maybe you can take a short and direct path to the exit, maybe there are long winding corridors stuffed with merchandise you need to pass through. If you take the longer path, you are more likely to lose more of your money before you get outside. The scientists at the CMS collaboration have recently observed a similar phenomenon in high-energy heavy ion collisions, as those illustrated in the event display.
The life of the tiniest particles making up ordinary matter — quarks and gluons — is governed by the laws of quantum chromodynamics. These laws require quarks and gluons to form bound states, like protons and neutrons, under normal conditions. However, conditions like in the early universe, when the energy density and temperature far exceeded those of ordinary matter, can be achieved in giant particle accelerators. In the Large Hadron Collider at CERN this is done by colliding lead nuclei that are accelerated close to the speed of light. In these conditions, a new state of matter, called the quark-gluon plasma, is formed for a tiny fraction of a second. This new state of matter is special, since within the volume of the matter, quarks and gluons act as free particles, without the need to form bound states.

Figure 1: A schematic presentation of a non-central (left) and central (right) heavy ion collision. The outlines of the ions are presented by dashed lines, while the overlap region in which the quark-gluon plasma is produced is colored in orange. The red star shows a position where two quarks might scatter, and green and blue arrows are alternative paths the scattered quark can take to escape the quark-gluon plasma.

When lead ions are accelerated close to the speed of light, the dimension along the beam axis shrinks as explained by the theory of relativity. Thus the colliding ions can be depicted as pancakes. The orientation of how these pancakes collide plays a major role on the shape of the created quark-gluon plasma, which follows the collision overlap region. This is illustrated in Figure 1 in a case where one of the ions is moving from you to the screen, and the other from the screen towards you. The left side illustration shows a non-central collision, where the overlap region is shaped like an almond. In a head-on collision the overlap region is much more round, as pictured on the right side. The red stars are examples of points where two quarks moving to opposite directions might collide. Connecting this back to the museum analogy, the lead ions are the museum, and the scattering causes the quarks to leave the museum. The quark-gluon plasma around the collision point represents the gift shop. In quantum chromodynamics, quarks and gluons carry a property called color charge. When a colored quark moves through a colored quark-gluon plasma, it loses some of its energy due to interactions with the plasma, like you might lose some of your money buying items from the gift shop. The amount of energy loss is expected to be proportional to the path the quark takes. In Figure 1, the quarks following the green arrow are expected to lose less energy compared to the ones following the blue arrow. As we mentioned earlier, quantum chromodynamics dictates that the quarks must form bound states in normal conditions. The scattered quarks do this by binding with other particles around them, also created in the collision. In the end, we see in our detectors these scattered quarks as bunches of particles going approximately to the same direction, called jets. Based on the above considerations, we expect to see more jets above a certain energy threshold in the direction of the green arrow, compared to the direction of the blue arrow.

Experimentally, it is not that simple to determine the short and long axes of the collision region. In this analysis, a new method that takes advantage of properties of dijets, systems of two jets going to opposite directions in the plane perpendicular to the beam, was used for the first time. Figure 2 demonstrates a dijet event used in this analysis from lead-lead collisions at 5.02 TeV center-of-mass energy. The two jets, colored in orange, can be identified within the busy environment of the collision.

Figure 2: Visualization of a dijet event in heavy ion collisions. The yellow curves represent charged particles produced at the interaction point, while the green and blue boxes depict the energy of the particles. The event is identified locating two energetic bunches of particles on opposite directions in the plane perpendicular to the beam. The event display is interactive, you can zoom and rotate it, also on this separate page.

Using the distributions of particles around both of the jets in the dijet system, we calculate a variable called dijet v2. This is defined as half of the difference between the number of jets in the direction of the short axis (green arrow in Figure 1) and the average number of jets. For example, a v2 of 5% means that there is a 10% excess over the average number of jets in the direction of the short axis, and a 10% defect in the direction of the long axis. A negative v2 value would mean, on the contrary, that more jets are seen in the direction of the long axis. The results of our measurement are shown in Figure 3. The v2 values for a dijet system are shown for different degrees of overlap of the colliding lead ions. The first observation from this figure is that, regardless of the degree of overlap, the v2 values are positive. Thus, the quarks that need to go through shorter distances in the plasma lose less energy, on average. Another observation is that the v2 values increase when the degree of overlap decreases. This is because, for collision geometries with less overlap, there is a bigger difference in path length between the short and long axes of the almond. 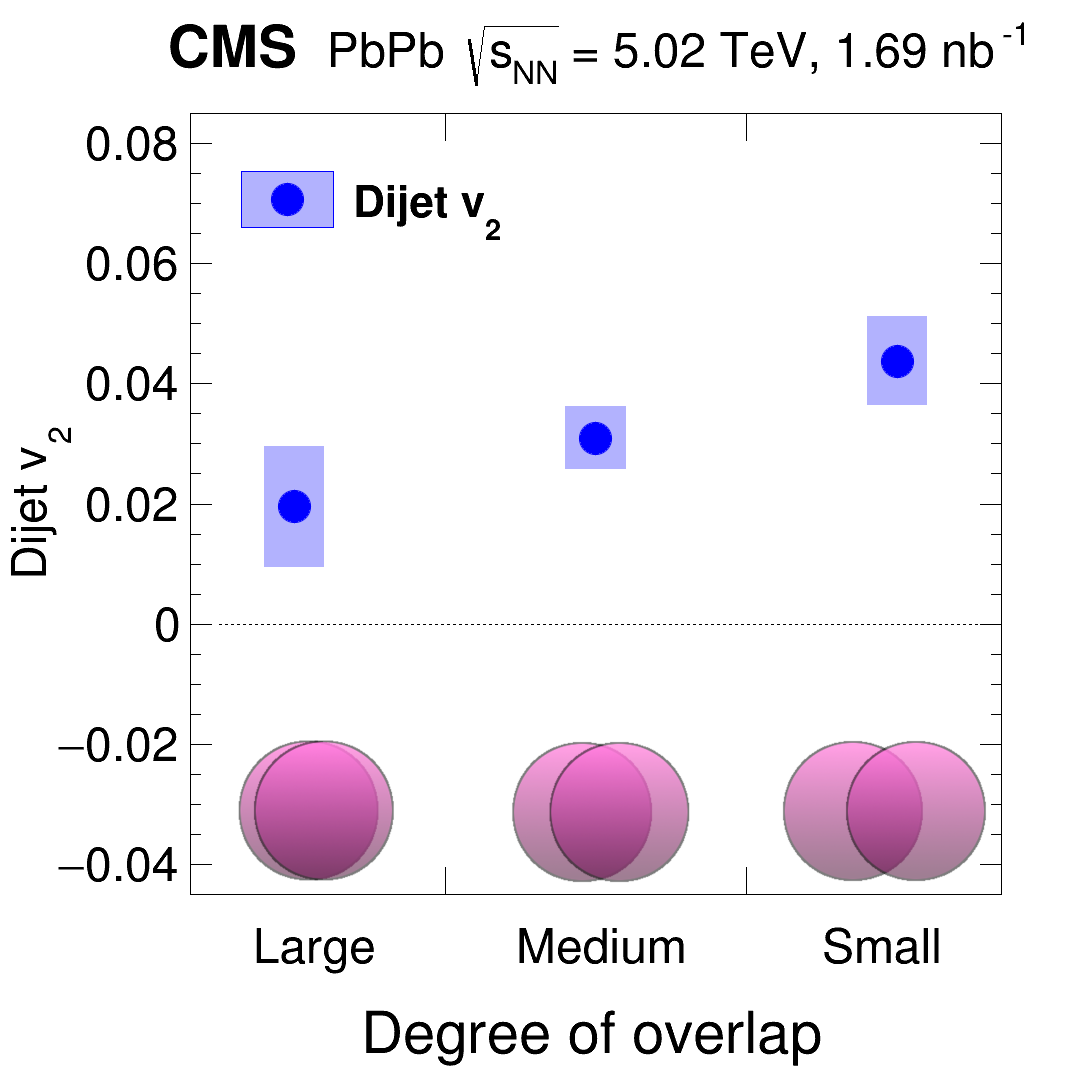 Figure 3: The measured dijet v2 values for three different degrees of collision overlap. The shaded areas around the points represent systematic uncertainties of the measurement.

These results provide new information on the path-length dependence of the quark energy loss in a quark-gluon plasma. This is crucial to understand the quark-gluon plasma properties in detail and for improving our understanding of the strong force. The future heavy ion runs at the Large Hadron Collider will provide much more data, which will further improve the precision of future measurements of the path-length dependence of energy loss. This brings us ever closer to fully understanding the properties of the early universe.