Exploring the physics processes inside the hottest matter in the universe

Quarks are elementary particles in the Standard Model and the building blocks of the protons and neutrons in atoms. The dominant force between quarks is the strong interaction. Gluons are the force carriers of the strong interaction, and one thing that distinguishes gluons from (for example) photons is that they can interact with quarks but also with themselves. In the theory of the strong interaction called quantum chromodynamics (QCD), high-energy quarks and gluons appear to become “free” with very weak interactions with each other. This phenomenon is called “asymptotic freedom” and is unique to the strong force. On the other hand, in most circumstances, even at colliders, the quarks and gluons are not energetic enough so quarks and gluons are always confined inside composite particles called hadrons. This is appropriately called “confinement”. For instance, protons and neutrons are hadrons consisting of confined up and down quarks. Because asymptotic freedom is a very important and unique aspect of QCD, physicists are continuously searching for the deconfined matter. The deconfined matter gives opportunities to study the behaviour of “free” quarks and gluons under extremely high energy conditions and the transition from deconfined to confined matter provides insights into the mechanism of hadron formation.

A new phase of matter consisting of deconfined quarks and gluons, called quark-gluon plasma, was proposed in the 1980s. In the quark-gluon plasma, hadron boundaries will disappear when the quark and gluon densities become extremely large at high temperature, approaching the regime of “asymptotic freedom”. This plasma matter is believed to have existed within 1 microsecond after the Big Bang when the universe was so hot that quarks and gluons were deconfined, and could not form protons and neutrons. One of the best ways to recreate such hot matter is to collide high-energy heavy nuclei head-on, e.g., lead-lead collisions at the LHC.

Experimental results, for example, from the Super Proton Synchrotron at CERN in 2000,  the Relativistic Heavy Ion Collider at Brookhaven National lab in 2004, and more recent ones, fit the overall theoretical expectations of quark-gluon plasma. To everyone’s surprise, constituents inside the quark-gluon plasma interact strongly with the behaviour of liquid, rather than gas in which particles are free and weakly interact with each other. After being created in a heavy-ion collision, the quark-gluon plasma expands, cools down, and eventually turns into hadrons detected in experiments.

The temperature of the quark-gluon plasma in heavy-ion collisions at the LHC is predicted to be trillions of Celsius, a billion times higher than the surface of the sun. At that temperature, nuclei melt together and form a hot “soup” of quarks and gluons. These light quarks and gluons are characterized by their small transverse momenta. The processes inside the plasma can be described via taking into account fluid motions with velocities approaching the speed of light with a theory called relativistic hydrodynamics. Besides the fluid-like behaviour of the expansion of quark-gluon plasma, heavy-mass quarks (such as charm and bottom) and particles with high momenta will suffer large energy loss when moving through the hot plasma composed of abundant quarks and gluons. Both of these phenomena are strongly dependent on how the collision between ions actually happened. When the overlap region between nuclei is larger, the collision event is characterized as more “central”. Particles passing through the quark-gluon plasma suffer greater amounts of energy loss in more central events as a result of a larger number of interactions with quarks and gluons inside the larger overlap region. In non-central collisions, the overlap between two nuclei looks a bit like an almond shape, illustrated in Figure 1, the expansion of the quark-gluon plasma is driven by the uneven balance in different directions when the plasma has a shape that is uneven. Studies of how that behaviour changes depending on the shape of the overlap offer new insights into understanding the inner workings of the quark-gluon plasma.

Figure 1: A schematic illustration of heavy-ion collisions. Left: the transverse view of two nuclei colliding. Middle: the almond-shaped region of two nuclei overlap at the initial stage of a collision. The region expands, driven by the non-uniform force, along different directions. Right: the momentum distribution in the transverse plane to ion beams at the final stage of the evolution of the quark-gluon plasma, as a result of the initial geometry presented in the middle figure.

The behaviours mentioned above are highly sensitive to fluctuations of the initial conditions, especially the event-by-event collision geometry. One powerful tool to study the behaviour is the elliptic flow, which is a measure of the imbalance of particles and their momenta in different directions. Elliptic flow gives information on how oval the distributions are as shown in Figure 1. As illustrated in the middle of Figure 1, the deviation from a round shape leads to greater pressures along the short axis which results in a final distribution where larger momenta are visible in the right of Figure 1. The nice thing about elliptic flow is that it is directly related to the initial shape of the plasma. This makes it possible to trace back the shape and get information on the intrinsic properties of the quark-gluon plasma. In addition to initial geometry, the elliptic flow of heavy quarks and high-momentum particles is also affected by the amount and the mechanism of energy loss when those particles traverse inside the quark-gluon plasma. The energy loss will lead to variations of the elliptic flow because the energy loss is random. The detailed mechanism of those energy loss fluctuations is still largely unknown because of the complexity of QCD.

Charm quarks are perfect probes to explore both collision geometry at the initial states and energy loss processes during the passages through the quark-gluon plasma, as well as their fluctuations. Unlike light quarks (up, down and strange), charm quarks are mostly created at the start of the collision and are hard to melt into the quark-gluon plasma due to their large masses. On the other hand, charm quarks are relatively rare. This poses challenges experimentally, especially for the measurements that need a vast amount of data where we compare and correlate the direction of the charm with multiple other particles produced in the same collision.

Figure 3: The transverse view of a non-central lead-lead collision. The imbalance of the momenta between different directions is visible. One direction is preferred by more tracks, as shown by the fact that more tracks point towards approximately 1 o'clock and 7 o'clock.

A new result by the CMS experiment addresses these challenges and performs, for the first time, a high-precision measurement of fluctuations of charm quark elliptic flow in lead-lead collisions. The measurements with the data collected in 2018 are performed via two-particle and the four-particle correlation method. The two-particle correlation technique can measure the elliptic flow with an upward fluctuation while the four-particle method is sensitive to the downward fluctuation. The ratios between them quantify the variations of elliptic flow from fluctuations of initial geometry and energy loss of the quarks moving through the quark-gluon plasma.  The neutral D0 mesons (consisting of one charm and one anti-up quark) are selected to be optimally sensitive to the effects of the quark-gluon plasma. We correlate the neutral D0 meson with one other or three other particles. Charged particles originating from quark-gluon plasma are mostly driven by the force induced by deviations from round shape and they are sensitive to the fluctuations from the collision geometry. Compared with charged particles, charm quarks also suffer energy loss in addition to the force from the expansion of plasma. Thus the four-particle correlation results of charm mesons provide unique sensitivity to energy loss fluctuations. 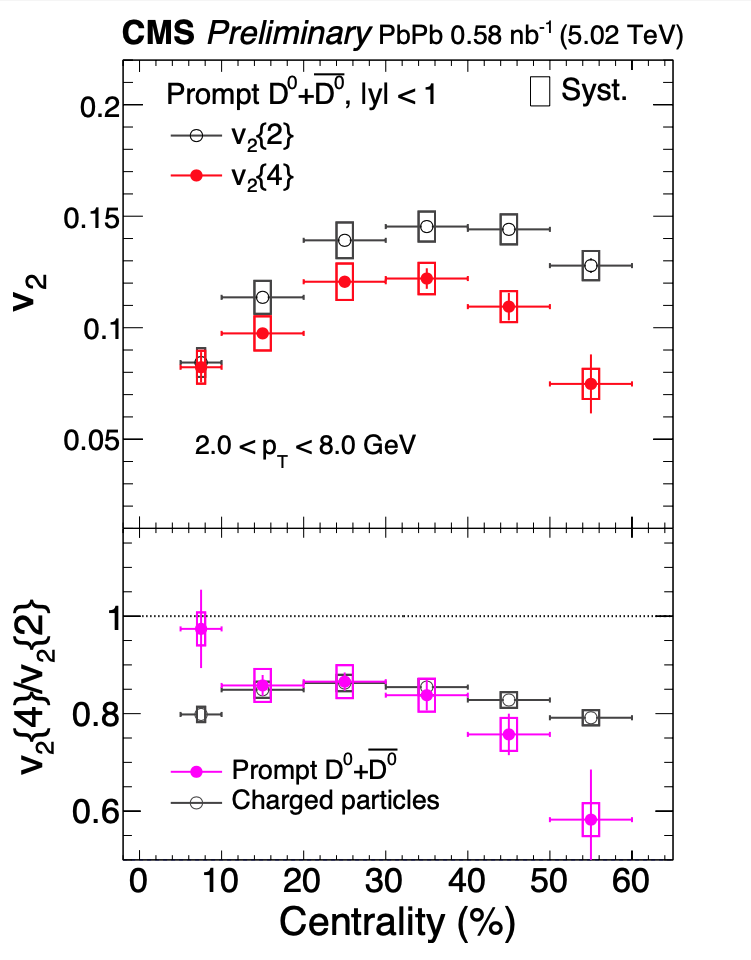 As shown in the upper panel of Figure 4, the elliptic flow obtained by comparing D0 mesons in two- and four-particle correlations increases from the most central to semi-central events and then decreases. This trend can be explained by the initial collision geometry, moving from a spherical shape (small centrality), to almond and then a very thin shape (high centrality) of the plasma. The ratios between these two methods, quantifying the fluctuations of elliptic flow, are shown in the lower panel of the figure. The D0 mesons are compared to those of charged particles within the same kinematic range. The similarity between neutral D0 mesons and charged particles reveals that the fluctuations of collision geometry play an important role in the generation of elliptic flow. On the other hand, the hint of the ratios splitting between D0 mesons and charged particles in high centrality events indicates that energy loss fluctuation effects become visible for charm mesons.

These results provide new insights into the underlying physics of the quark-gluon plasma. Run 3 will start in 2022 and the High-Luminosity LHC will start from 2027 with the upgrades of the accelerator and the number of collision events will become an order of magnitude higher than that available now. This increase in the amount of data will allow the precision to be improved substantially. A new timing detector (MTD) will also be installed for the High-Luminosity LHC, and that will help to distinguish D0mesons from other particles. The better discrimination power with more data will allow new measurements with finer intervals of transverse momenta and higher precision, shedding light on the inner mechanism inside quark-gluon plasma. In addition to proton and lead beams, other light ions such as Oxygen are also foreseen during the High-Luminosity LHC era. Oxygen has a  smaller-size nucleus that offers opportunities for studies of the initial geometry of the quark-gluon plasma. All these improvements will provide CMS physicists with unprecedented opportunities to study hot QCD matter during the years to come.