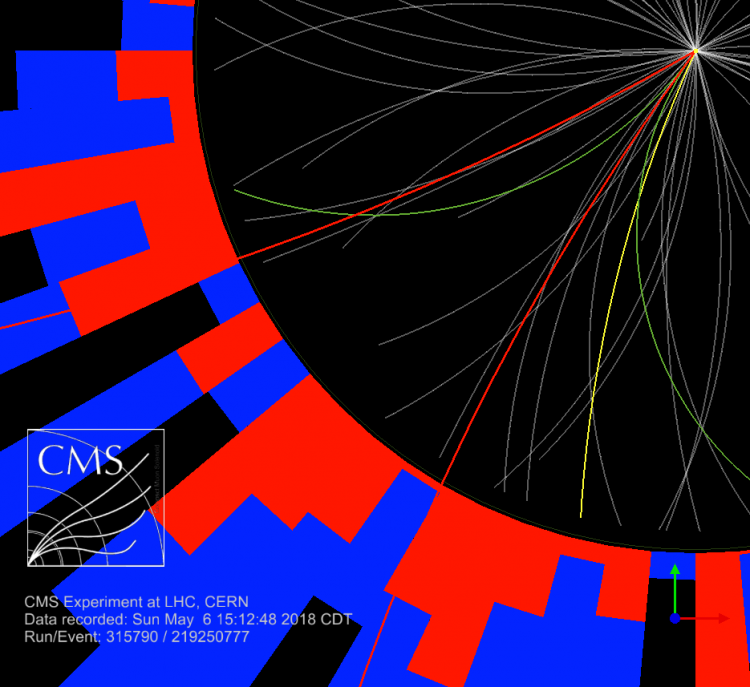 In November 2018 the proton-proton running of the LHC Run 2 ended. The data collected in 2018 is the largest sample ever collected at the LHC. Just under three months after the final proton proton collisions were recorded, the CMS collaboration has submitted the first paper using this dataset. This reflects an immense achievement as a complex chain of data reconstruction and calibration is necessary to be able to use the data for analysis at the level that it is suitable for a scientific result.

The CMS spokesperson Roberto Carlin comments that “it is truly a sign of effective scientific collaboration and the high quality of the detector, software and the CMS collaboration as a whole. I am proud and extremely impressed that the understanding of the so recently collected data is sufficiently advanced to produce this very competitive and exciting result.”

Quantum chromodynamics, or QCD, is one of the pillars of the Standard Model of elementary particles and is well established as the theory that describes the behaviour of the strong nuclear force that keeps quarks bound together in composite particles called hadrons. However, the QCD processes behind the confinement of quarks and gluons in hadrons are not yet well understood, despite much progress in the last two decades. Experimental studies of particles consisting of heavy quarks and anti-quarks are particularly important to foster further progress in our understanding of the mechanisms involved in the formation of these particles, given that the presence of heavy quarks enables the use of more easily calculable approximate predictions of the behaviour and mass of the particle. One of the best ways to understand how the strong force binds quarks is to study particles composed of charm and beauty quarks.

Particles called mesons that are composed of quark-antiquark pairs. For the first generation of quarks the best known meson is the pion (π), but there are many other such particles possible in the standard model. Some mesons have different masses but still have the same quarks inside. The differences between each of the particles in such a family depends on the way the quarks are configured inside the meson. Little is known of the Bc family, which consists of mesons composed of a beauty quark and a charm anti-quark (or vice-versa). The ground state was discovered in 1998, by the CDF Collaboration, and no other observations have been reported. The main challenge in these studies is that the numbers of particles produced is significantly smaller than those of other mesons made of identical heavy flavour quarks.

The high collision energies and integrated luminosities provided by the LHC opened the path for the exploration and further understanding of the Bc family. The first studies were published in 2014 by the ATLAS Collaboration, using proton-proton data collected during LHC Run 1. At the time, ATLAS reported the observation of a single resonant peak consistent with the excited state called Bc(2S). On the other hand, the LHCb Collaboration reported that their data showed no evidence of any Bc(2S) signal at all.

Both the LHCb and ATLAS analyses made use of the fact that the Bc  particles should be visible as a peak in the mass distribution of the Bc π+ π-  system. The CMS experiment central detectors based on silicon pixel and microstrip tracker technology provide an excellent mass resolution for any particles such as Bc(2S). Also, the LHC Run 2 dataset provides a much larger sample of Bc(2S) particles due to the extra collision energy and huge increase in number of LHC collisions. This puts the experiment in an excellent position to use this large dataset to revisit the Bc(2S) puzzle. Daniel Alejandro Pérez Navarro, a Ph.D. Student at Centro de Investigaciones y de Estudios Avanzados (CINVESTAV) del IPN in Mexico, who worked on this measurement, is excited about the unprecedented size of the dataset, and mentions "There are massive amounts of pions and muons produced at the LHC, and this new large dataset allows us to filter out the few collisions where Bc  and the other particles from its family are produced".

Taking advantage of the large LHC Run 2 data sample, collected in 2016, 2017 and 2018, corresponding to an integrated luminosity of 140 fb-1, the CMS Collaboration searched for the Bc(2S) and Bc*(2S) states. The Bc is identified by its decay to a J/ѱ particle (which then decays to a pair of muons) and a charged pion. Peaks consistent with the two 2S states have been observed, with a statistical significance well above 5 standard deviations, and the Bc(2S) mass has been measured with a very good precision: 6871.0 ± 1.2 (stat) ± 0.8 (syst) ± 0.8 (Bc) MeV, the last term being the world-average Bc mass uncertainty. César Atzín Mondragón Herrera, another Ph.D. Student at CINVESTAV, adds "At the beginning, we were looking for only one single peak, but after some time and a lot of hard work, we found a second peak of a second particle never seen before."

The quality of this measurement reflects the exceptional performance of the CMS experiment, in particular of its silicon tracker operating in a strong magnetic field of 3.8 Tesla. It is also remarkable that the analysis of the 2018 data could be made within only a couple of months after the end of the data collection period, relying on the very large datasets produced by the LHC but also the excellent performance of the CMS detector over many years, and the excellent functioning of the CMS software and computing. The results are reported in a paper submitted on February 1st, 2019 to the journal Physical Review Letters and are presented at CERN today.

While the masses and sizes of these beauty-charm quark-antiquark pairs place them between systems consisting of only the same flavour, so that many properties can be theoretically inferred by interpolation of existing knowledge, the unequal quark masses could lead to more complex dynamics, where some (non-relativistic) approximations might break down. Therefore, these measurements contribute significantly to the detailed characterization of heavy meson spectroscopy and provide a rich source of information on the QCD processes that bind heavy quarks into hadrons. Jhovanny Andres Mejia Guisao, who is a postdoctoral researcher working for the Universidad de Antioquia in Colombia, mentions that "One of the most interesting moments in this project is how amazing it was to see how our experimental result can help improve the understanding of these rare particles in the framework of QCD".