Getting excited about quarks

Physicists continue to question if the particles we know of are the most fundamental. A new result by the CMS collaboration examines the data collected between 2016 and 2018 for evidence that quarks are composite particles and not elementary.

Since ancient times, philosophers and physicists alike have discussed the prospect that all pieces of the observable universe are made up of one or more “indivisible” particles. The Greek philosopher Democritus proposed the theory of atomism (from the Greek atomos, meaning “uncuttable”).  Atomism describes the world as being made of an infinite number of indivisible particles. After sorting materials based on experimental observations, scientists developed a theory that a common piece connects the elements and, borrowing from Democritus’ approach, they called it the atom. J.J. Thompson’s discovery of the first subatomic particle – the electron – and Hans Geiger and Ernest Marsden’s observation of the nucleus showed that the atom was also composed of parts, leading to the development of the Bohr model. So much for “uncuttable”!

Figure 1: All known atoms can be made of electrons and quarks (credit: CERN)

The electron remains, as far as we know, indivisible and is considered a “fundamental” particle along with the quarks, bosons, and other leptons, that make up the Standard Model of particle physics. But if there is any lesson to be learned from the history above, it is that there is no reason to declare that we have reached the most fundamental of pieces to our universe! Thus, physicists at CMS continue to probe the existence of a substructure to the so-called “fundamental particles.”

One such search performed by CMS physicists looks for an excited bottom quark. If a quark is made up of other constituent particles, the energy required to split them would be higher than the energies provided by the LHC. However, it may be possible to “excite” the bottom quark in a way similar to an electron being excited to a higher orbit in an atom by the absorption of a photon. A quark could instead be excited by the absorption of a gluon, as these are abundant in the proton collisions made by the LHC. In such an interaction, the energy of the gluon would be converted into internal energy of a bottom quark which would then appear as a very heavy particle, called an excited bottom quark. The new particle would be so massive that any decay to two standard model particles will result in vast amounts of binding energy being transferred to the lighter decay products as kinetic energy. In that case, such a new particle would create a back-to-back signature with the decay particles in opposite hemispheres of the detector.

The excited bottom quark could decay back into a gluon and a bottom quark (just as an excited atom eventually emits a photon so that the electron decays back into a lower electron shell). However, the decay into a top quark and W boson is predicted to be two times more likely. This analysis additionally only considers the case when the top quark and W boson both decay into large energetic hadronic showers since it is the most probable decay of both particles.

Unfortunately, there are many ways that hadronic showers are made in LHC collisions, so finding excited bottom quarks is not as easy as that! To discern excited bottom quark events from similar-looking background collisions, the analysis uses specialized algorithms to identify top quarks and W bosons. In particular, algorithms analyze the showers to determine how many “cores'' are inside the more extensive showers. A W boson decays into two light quarks so will have two cores. The top quark will have three cores because it will decay into a bottom quark and a W boson. Finally, particle physicists can identify the bottom quark inside the top quark shower because a particle containing the bottom quark will travel a measurable distance in the CMS detector.

There are still many collisions from other, already known, particles that exist in the data even after using these dedicated algorithms to identify the top quark and W boson. These are accounted for by using a combination of simulation and measurements of the data. These estimates create a model of the background of Standard Model particles that have a similar signature in the detector. When analyzing the data, CMS physicists compare this background-only model to a model where simulated excited bottom quark events have been added to the background.

The analysis does not observe a significant deviation of the data from the predictions by the Standard Model, and this means CMS physicists can exclude the existence of excited bottom quarks with masses below about 3 TeV. 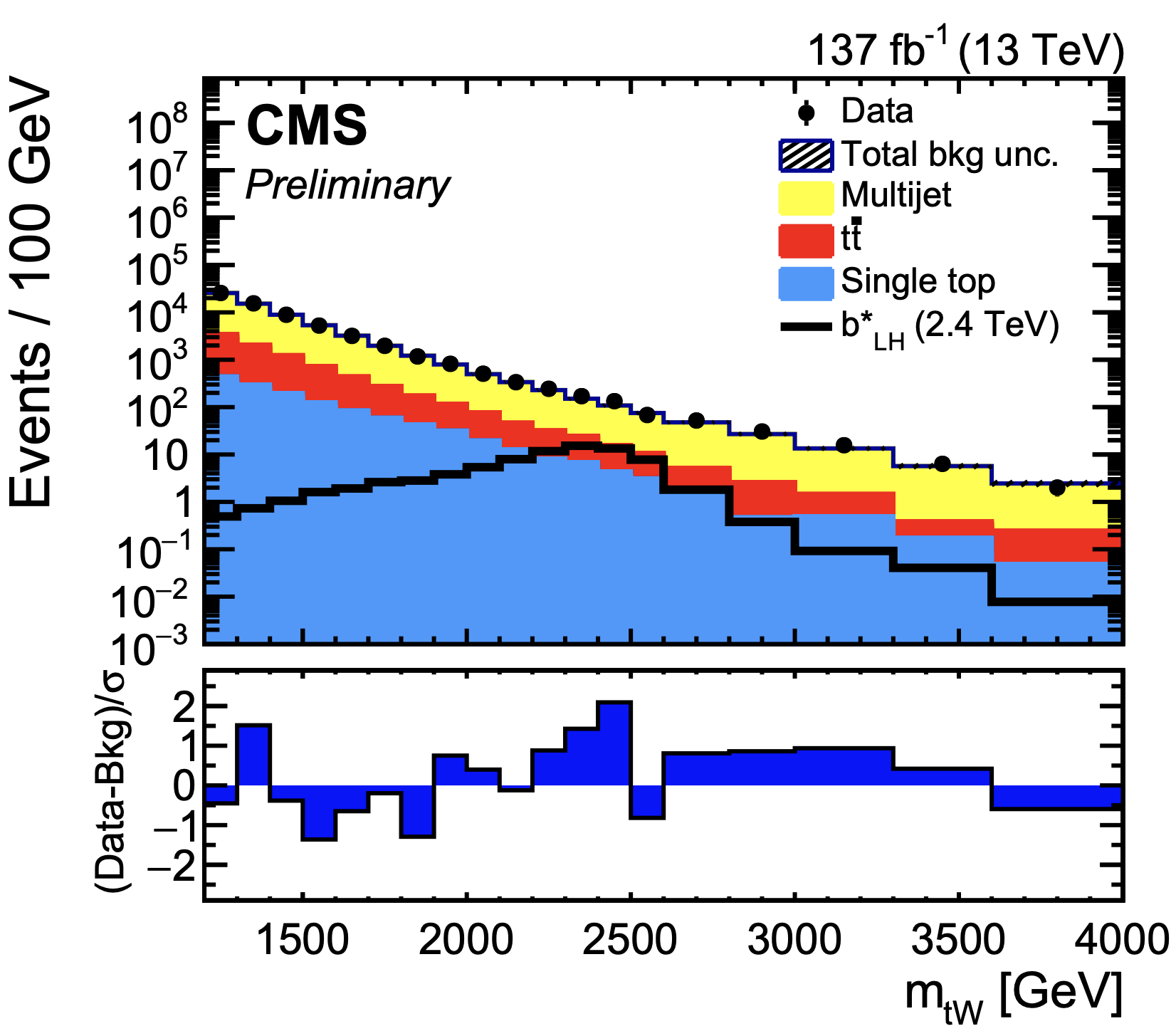 Figure 2: The invariant mass of the top and W hadronic showers is used to distinguish a possible signal which peaks near the excited bottom quark mass against the Standard Model background, which is a smoothly falling distribution. The black points represent the data, the signal simulation for a 2400 GeV excited bottom quark is the solid black line, and the individual background components are stacked in blue, red, and yellow. The bottom panel quantifies the difference between the data and the Standard Model background estimate. It shows a slight difference between 2400 and 2500 GeV, that was verified to be not statistically significant.

While this analysis uses all of the data in this signature collected by CMS from 2016 to 2018 during the LHC Run 2, there are two other signatures where excited bottom quarks could be visible. One considers the top quark decaying leptonically and the other with the W boson decaying to leptons, but neither of these analyses has been considered so far.

Additionally, CMS will start collecting more data in Run 3 in 2022, and will eventually upgrade to the high-luminosity LHC, which is projected to increase the amount of data by a factor of twenty. With the high-luminosity LHC alone, this analysis would be sensitive to excited bottom quarks up to a mass of 4 TeV. However, technological improvements in analysis methods should push this boundary even further. By combining the different signatures, using the newest top quark and W boson identification algorithms, and analyzing more data, CMS physicists should be able to extend the reach of this search to much higher excited bottom quark masses. The search for excited quarks continues, and that also means continuing the check if the Standard Model particles are truly fundamental.